For years Iâve been waiting for a commander which lets me combine discard mechanics and zombies in a competitive package. Since WotC has yet to make one, I did it myself! 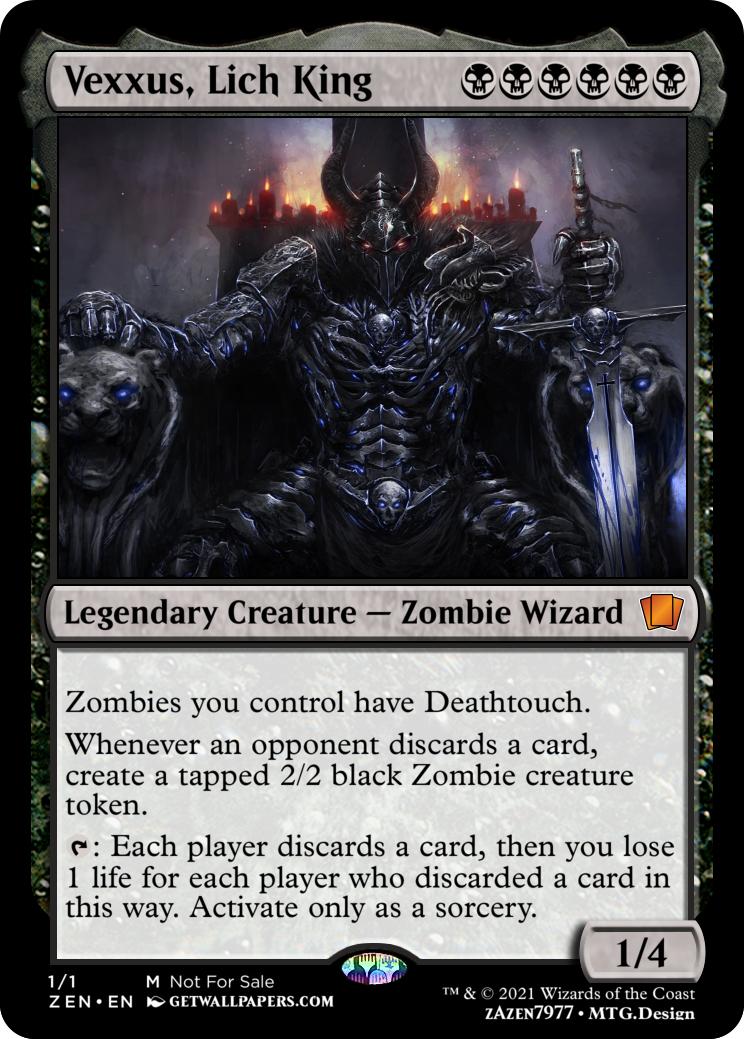 Iâd love to hear any comments or suggestions!

Thanks for your comment Mcat1999! Youâre right, I want him to be strong and fun to use, but I got a little carried away. I want the card to theoretically be playable, so I took your advice - I reduced his stats to 1/4 and increased his casting cost to [B][B][B][B][B][B]. I want to make it difficult to ramp into him during turns 1 and 2 and prevent players from using colorless ramp sources.

Also note that he only produces a token each time an opponent discards a card.

Mcat1999, nice, a runaway steam engine is what I was going for! Tinybones and the Tergrinator would definitely be in the 99 with Vexxus as commander.

I kinda feel like it is a bit too self-contained. Like how does this really incentivize you to build around him? I mean you can just run discard to make him a hand denial engine ( Sadistic Hypnotist says hi), but how do you really build around his Zombie making abilities? Then you would need cards like Howling Mine and Font of Mythos , Anvil of Bogardan to grant the opponents cards you can later have them discard to gain the benefits. However you can only activate the ability as a sorcery, so they get their turn to get rid of their cards and thus deny you more tokens.

He seems to be designed as a token generator but comes more across as a discard engine that keeps players low on gas. Stax can work in competitive environments, but I find the creative possibilities around the card a bit lacking.

I think the concept could be fun akin to Waste Not and Bone Miser , but I think it would be more fun/engaging if you could build more around him.

Just airing some ideas or concepts for a direction the card could take.

Attacking Zombies you control have Deathtouch.

Whenever a creature you control deals combat damage to a player, you may have that player draw a card then discard a card, then you do the same.

Whenever an opponent discards a card, create a tapped 2/2 black Zombie creature token.

Alternative on the discard trigger:

Whenever an opponent discards a card, if the discarded card was a land card, that player loses 3 life. Otherwise you create a tapped 2/2 black Zombie creature token.

I changed the cost to 2 colorless and 4 blacks. This better allows colorless mana rocks, cost reductions and splashing in other colors than mono-black, and there's 6 pips to Devotion, which does seem a bit excessive if for no other reason than Gray Merchant of Asphodel .

I added Knight to his subtypes to allow more broad synergies with say Haakon, Stromgald Scourge or within the 99 in a Knight themed deck.

Giving all your Zombies deathtouch makes combat with you a real pain. Only giving it to attacking Zombies makes you less problematic to attack into but if the opponent wants to stop the onslaught of zombies, they may need to trade into some zombies on the defense or deal with your Commander. I know Death Baron exists, but he doesn't both produce the zombies and make them troublesome.

I was unsure about the enabling ability. The active ability doesn't require you to do anything with the Lich but sit back and slowly drain your opponents of their cards and create a mass army of zombies. It also presented a limit on the zombie generating ability.

I wanted to make it scalable so you could actually amplify the effect and build around him. However just slapping Larceny on a body with a Waste Not benefit seemed a little strong on the stax front, which could be a frustrating aspect of playing against this Commander.

If you instead make it a looting effect, there's a guarantee that it triggers the beneficial discard trigger and it would not be card disadvantage to the opponent, so it can be allowed to be "stronger" because that opponent isn't locked out. Instead they are actually getting a benefit in terms of card selection. This means that opponent can much quicker assemble an answer to your horde of zombies. To counter act this, you choose if the looting happens AND if it does, you get in on it.

Now it is true that you could potentially accrue a lot of zombies that, given they get through could double each round and you can quickly swarm the board with zombies. However that is not far from what Najeela, the Blade-Blossom can do. And this Commander costs 6 MV (mana value) and is mono colored.

It is possible that the discard trigger should be dependent on the cards discarded - making the opponent have a choice in what happens. Either they lose lose lands and take additional damage or they lose gas and you get more bodies.

Additionally it could be considered to let the tokens enter untapped, since they don't have Deathtouch through the Commander when on the defense.

This is generally taking the idea of the hand denial and coupling it with the specter benefits for a more Voltron style support with Zombies as a more defensive tool.

Whenever Vexxus deals combat damage to a player, that player discards two cards. Then put two +1/+1 counters on Vexxus for each player with no cards in hand.

Whenever an opponent discards a card, create a 2/2 black Zombie creature token.

, sacrifice a Zombie: Vexxus gains Indestructible until end of turn.

At the beginning of each player's end step, that player discards a card.

Whenever an opponent discards a card, create a tapped 2/2 black Zombie creature token.

, sacrifice a creature: choose one --

Tzefick, thank you for your detailed comment!!! I appreciate your input. After a lot of thought, I agree with your analysis. Youâre right that Vexxus isnât focused enough, so I changed him to be more in line with your first suggestion (âThe Swarmâ), which captures the feeling I was going for.

I want Zombie token generation to be the focus, instead of him being a stax piece that rarely generates a token, since other players can dodge the ability. By making him always generate a token when a zombie deals damage to an opponent, instead of it being a tap effect that affects all players, I can focus on combat and make him a stronger creature. These changes plus the limitation of granting deathtouch only to attacking zombies allow me to reduce the black mana in his cost. And youâre right about Gary, I hadnât considered the tremendous boost to devotion Vexxus would give me. So now I think both your and Mcat1999âs concerns have been addressed. He seems more balanced and fun to play with/against.

I kept the zombie tokens tapped, since in multiplayer games this ability will get out of hand quickly, and I think I need to give other players time to react before I create a wave of blockers.

Since Vexxus is more combat focused now, I changed him to a Zombie Knight, for the added interactions with Haakon. Zombie Knight Wizard is too long to fit in the box hehe.

To me that is definitely something you can get creative with. Focusing on zombie generation, discarding your opponents, Megrim -like effects. And it might actually be strong enough for decks like Nekusar, the Mindrazer to play him in non cEDH settings.

Also they have printed Illuna, Apex of Wishes - so I don't think it is completely off the table to have a Zombie Knight Wizard.

Good point Tzefick, Iâm all for making Vexxus a Zombie Knight Wizard. Itâs a shame that Mtg.design doesnât let me modify the size of the text in the card type box, or Iâd change it.

And there are definitely several angles one could take when deck building with Vexxus, either as commander or as backup for Nekusar, Nath of the Gilt-Leaf , Tergrid, God of Fright Â Flip, or another discard-oriented commander. It would be lots of fun to use Vexxus in a build which punishes my opponents for drawing cards, while also using discard effects to amass a horde of zombie tokens.