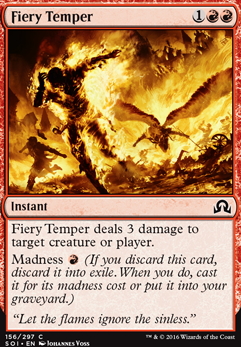 Hello there. This Deck is my try to bring the archetypes of Tortured existence and Madness together in my favourite colors. I have beed brewing with a combination of madness and Tortured Existence for a while now, and since Reckless Wurm is now getting reprinted in ultimate masters as a common, I finaly will build this deck and bring it to my lgs for the pauper evening.

So, what is this Deck wanting to do? Basically, we are a madness Deck, that uses Tortured existence for card advantage. Thats right, In this Deck, Tortured Existence is not the main mechanic, it is "just" a value card. The Deck should work without in on the Battlefield quite well. However, if it is on the Battlefield, in this deck it nearly always reads: Pay 3-4 Mana: bring a creature card from your hand on the battlefield, return a creature card from your graveyard to your hand.

Our general game plan is to get a discard outlet and then play strong undercosted spells with it. Therefore I divided my Deck in two Parts, first: cards that discard our hand Tortured Existence Lightning Axe Putrid Imp Gathan Raiders Olivia's Dragoon Faithless Looting

We also have 3 cards to help tortured existence to do it's thing, one Carrion Feeder and two Golgari Brownscale. Both are here to start our Tortured existence Engine, one as a card we can always get back to our hand, and the other to get value from creatures going in our graveyard and as kind of a mana sink in long, grindy games.

The Deck needs a few early, reliable discard outlets. Therefore, 4 Putrid Imps and Tortured Existance are a must. Olivia's Dragoon is mostly a backup Putrid Imp. Faithless looting can act as that later on, and it also finds us our engine pieces. Gathan Raiders and Lightning axe are just there for the value, and because there "downside" is an upside here.

That gets us to our cards we want to discard. Bloodmad vampire is a must, as it can come down as ealry as turn two and wins games alone, if it is not properly dealt with. It also trades with nearly everything in the format, and we can always bring it back later, while our opponent most likely can't bring back their creature. Reckless Wurm is the other big payoff, and the reason, this Deck might be working now. Grave scrabbler is insane value with tortured existance and dark withering and Fiery Temper are really cost efficient removal.

An Ideal Game can look something like this: Turn on: Swamp, Putrid Imp Turn Two: Mountain, pass, discard and play bloodmad vampire in our opponents end step. Turn Three: Mountain, Lightning axe at whatever blocker our opponent has, discard and play another Vampire, swing for 5 Damage Turn Four: Land, either Tortured existence to get our creatures back or use removal spells to press your attack and/or play a reckless wurm.

From this example it should be clear, that we want to attack. We like trades, as we can get our creatures back, while our opponent most times won't. We also have some big creatures, so we are unlikely to get ougrown by our opponent.

My concerns, where I am asking for help now, is this: We can sometimes be slow and vulnerable to more agressive Decks and removal. Also, the balance between discard and payoff needs to be good. Last, the sideboard. Are there any other cards worth considering, because we lack something I missed? Thats it for this, any help will be greatly appreciated.