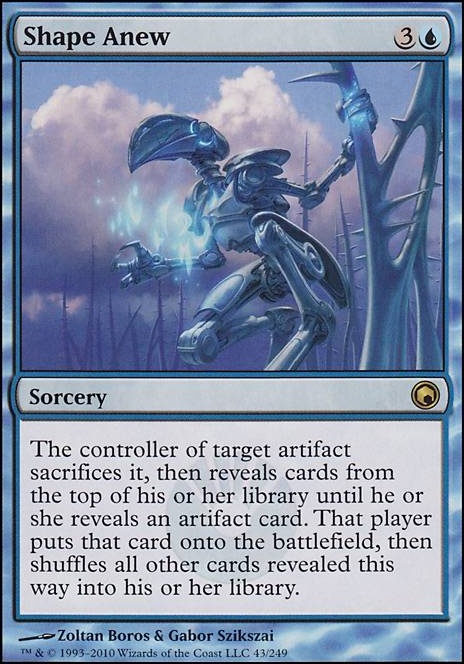 The controller of target artifact sacrifices it, then reveals cards from the top of his or her library until he or she reveals an artifact card. That player puts that card onto the battlefield, then shuffles all other cards revealed this way into his or her library.

Topdeck of the Century (Mk V).
by Yesterday

Shape those Thopters!
by dnthymamai 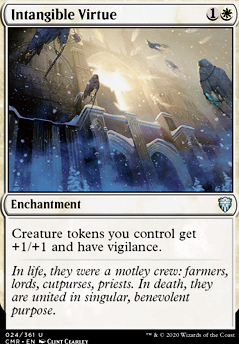 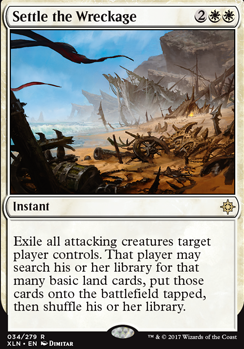 Only having shape anew to quickly get a citadel into play seems very suspect to me given that you're far more likely to land a borderpost into play. If you wanted a sure fire way to get a citadel into play you could try using Gifts Ungiven with a pile that would either leave you a citadel to cast or the ability to put it back on top (Noxious Revival) to shape anew from there. Something like Noxious Revival, Bolas's Citadel, Shape Anew, and Trash for Treasure. The combinations could look like this:

No matter which way they could split your cards you could get a citadel into play and combo from there. The best part about it , is the fact that you can gifts on your opponents turn and then combo on yours. If you wanted to try this plan you could modify your land base to many different named lands that could be gifted for to decrease the lands left in the deck. (example island and snow covered island count as 2 different lands).

Other than that I would probably suggest investing into a copy of Echoing Truth/other bounce spell just in case your opponent has a leyline of sanctity of their own on the battlefield. The citadel sac is good but may not leave you enough permanents to repeat very often.

I like what you've got going on here, let me know how it goes sometime.

Not my first thought on a dovin deck, so my first thought would be to give the idea of what I saw with him in oathbreaker, Blightsteel Colossus as the only artifact in the deck, and Shape Anew as the signature spell (or colossus as only creature and Polymorph as the signature). the rest of the deck would mostly be treating the deck like a Edric, Spymaster of Trest deck with many 1 cmc hard to block creatures ( Bident of Thassa could be pretty sweet)

now for this deck, any sort of 1 cmc cantrip can help increase consistency, Arrester's Zeal in most cases won't be a good card for your deck (the pump with added flying won't really be relevant most cases), Dramatic Reversal if you play it most people will assume an Isochron Scepter is in your deck somewhere, so a Rally of Wings might be more relevant.

I want to suggest a few cards that had worked very well on my BRUDICLAD (scotish intensifies) Deck.

hmm this deck could probably be built way more competitively, you could cut all of the non blightsteel, have ink and blinkmoth nexus, and run Polymorph as extra copies of Shape Anew.

Well after a bit of dicking around i come to the following conclusions:

1# Shape Anew is enabled by Blinkmoth Nexus (and Inkmoth Nexus - may be important in case someone uses Pithing Needle) & Trail of Evidence - which creates such a nice curve that i am tempted to run Disrupting Shoal. Of course it also allows to keep cards like Snapcaster Mage & Vendilion Clique in the deck.

2# Polymorph works best with fetching for Dryad Arbor using Misty Rainforest (which is not cheap - but not as bad as tarn) - however it makes you ditch the best creatures (that also cost a fortune), for stuff like Mission Briefing - and as an added bonus it allows me to play artifacts in the main and side beside the angel - however i am not sure its wise to sideboard cards that are gonna get hit by the hate coming my way in game 2 & 3.

3# i really miss the exile clause on Glorious End

Well i am a cheapskate. At least when it comes to paper magic. And since i managed to create a properly viable mono red homebrew, i have very hard time to convince myself to put much effort into my builds that require those pricy multicolored fetch & shock manabases - stuff like ~70$ Scalding Tarns.

My pickle is that i have this very great brew centered around Cheating into play platinum angel and protecting it - but its UR, to have access to Madcap Experiment & Glorious End

Well i don't wanna spend a fortune on the mana base.

Shape Anew & Polymorph both seem to be viable alternatives for one of the key red cards.

Which one do you think is the more viable choice for the deck?