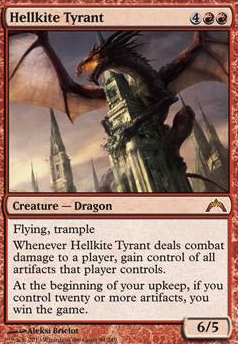 Rocco CEDH (An Attempt At)
by TheEvilWizard 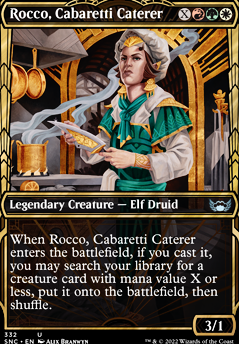 Any reccomendations would be great, I'm fairly new to Magic so I don't have a ton of experience. The deck plays out like this: Get as much mana on the board as you can as fast as possible. When you have enough, play Increasing Savagery on Marwyn, the Nurturer, tap it for 6, and if you have a spare mana, play it again. Next turn tap Marwyn for 16 + tap all lands except 1 white (for Blacksmith's Skill in case you need it...I used this because it protects both creatures and potentially enchantments) to play Genesis Wave and put out all permanents (ideally you get Colossification/Mayael's Aria out if you don't have Mayael already) or just play Colossification or Increasing Savagery, and win on the next upkeep with Mayael's Aria.

Heh, sorry, I keep thinking of random things for Ramos now. But there's Mayael's Aria that could be great. Bump up Ramos by three instantly and then continue to pump all your creatures every turn.

And things with the explore mechanic can get you counters and value. Enter the Unknown is one of my favorite cards for the ramp, dig one card, and put a counter on a creature. I see you've got a few similar cards, but more of that effect can't hurt probably.

Love your decklist! I play a very janky combo based version of Ramos as well... I wanted to suggest Mayael's Aria instead of Simic Ascendancy as it provides more colors for Ramos, and better value with a similar wincon.

Other land things to consider: Ancient Ziggurat, Thran Quarry, and Unclaimed Territory - just to have more options for the color-intensive dragons. There is also Bonders' Enclave, which could be useful if you feel the need for more card draw. Finally, if lands end up becoming too frequent end- to late-game, Tectonic Reformation might help get more dragons in hand.
I'm a huge fan of enchantments, and I think Curse of Opulence, Valakut Exploration and Mayael's Aria could do work for you here. And, if you wanted to cut instants out (and not activate anything during other players' turns), you could add in a Price of Glory. Though, alternatively, Lure of Prey could also be a very effective instant in this deck.
And lastly, mostly for the art, Grave Betrayal.

You mention Mayael's Aria but its not here?

Shield of the Oversoul for boss protection

As for potential alternate commanders, here are what I would recommend. My goal here isn't to necessarily power up your deck, but that would likely happen if you choose someone other than Brion. The addition of other colors can add versatility as well as variety--potentially leading to more fun. I feel like being able to play any giant (or at least more giants) would make for a truer giant-tribal experience and allow the deck to grow better as new sets and new giants come out. Also, when you're on a budget the addition to other colors will allow you to play better creatures and better utility without having to scrape the bottom of the barrel in Boros colors.

Going for all five colors would allow you to play any giant across Magic's rich history and allow any utility card you could possibly want. This would be the best choice as you continue to play, as any upgrades or new giants could fit in the deck. Don't be intimidated by the mana base; five-color is easy on a budget.

Morophon, the Boundless - It's a giant! Technically. The anthem is cute and the mana discount is enormous. One of the best options for Giant Tribal. I have one for trade!! Highly highly highly recommended

Golos, Tireless Pilgrim - Truly obscene power. He ramps when you cast him (making his commander tax kind of one mana instead of two!) and his ability to play three cards off the top of the deck is nothing short of perfect for a mana-expensive deck like Giant Tribal. Cannot recommend enough.

Kenrith, the Returned King - Another incredibly strong choice. He can give you trample and haste--both things big slow giants want. He can grow your team, he can draw cards, and he can bring back the expensive giants from the graveyard. The lifegain can be good too! A top-tier choice.

Jodah, Archmage Eternal and Jegantha, the Wellspring are passable but are completely outclassed by the three mentioned. Jegantha is a giant elk for what it's worth.

The addition of alone would both power up the deck and make it run smoother without having to invest in expensive cards. There are a bunch of great Giants in green on a budget and it seems that WotC is making more and more Green giants in modern times, compared to the old days, making it a safe choice when it comes to future additions.

Mayael the Anima - A fantastic and strong choice. Naya colors and a strong mana-sink for when your hand is empty. Having expensive giants is perfect for her ability! A top-notch choice. Highly recommended. Mayael's Aria is a fun card!

- Hatch giants out of eggs! A really great way to cheat on mana costs. A pretty good choice and a funny one. I have one for trade.

Samut, Voice of Dissent - Granting haste to your team and being able to surprise-untap a giant to block an attack is pretty good utility. A good--but not excellent--choice.

- A decent choice. Goading opponents' creatures would allow your own giants to swing in with impunity. I have one for trade.

Gahiji, Honored One - An all-right choice. The ability powers up our team and incentivizes your opponents to attack each other. It's a giant beast, for what it's worth.

I'm not sure why one would want to run four colors when one could easily run all five, but there are two very interesting choices for generals in the Blue-less combination. Personally I find the Blue giants better than the Black giants though. None of the options for Black-less are any good for Giant Tribal.

- Her ability is no joke when it comes to smashing face. A good choice, but we can probably do better.

and Ikra Shidiqi, the Usurper

- Now THIS is an interesting commander combo. Make a sort of loose lifegain theme around Giant Tribal. If you want to have a truly unique take on Giant Tribal that nobody has ever seen, this may be the way. I have Ikra Shidiqi for trade, but not Bruse.

Oloro, Ageless Ascetic and Ruhan of the Fomori can be commanders, but I think they won't be very good for Giant Tribal

I would highly recommend running Morophon, the Boundless or Mayael the Anima as your general, with Golos, Tireless Pilgrim and Kenrith, the Returned King being equally as good--if not better (mechanically). You'll get to play more giants, better giants, and ramp into them easier--all while still staying on a budget. Also, these commanders actually facilitate giant tribal and a concept.

I'm really intrigued with the Bruse Tarl, Boorish Herder and Ikra Shidiqi, the Usurper too.