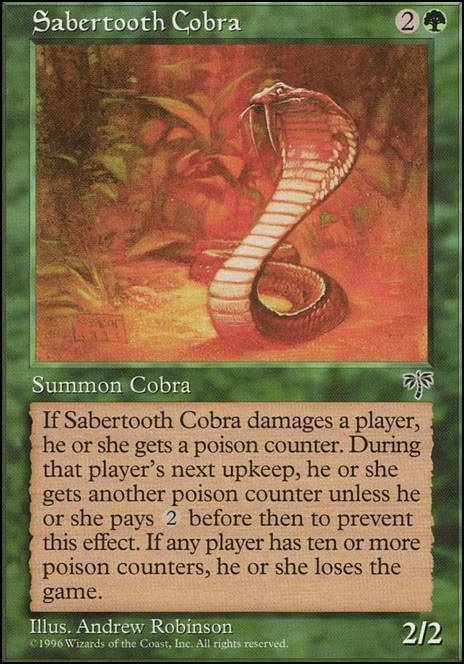 Whenever Sabertooth Cobra deals damage to a player, he or she gets a poison counter. That player gets another poison counter at the beginning of his or her next upkeep unless he or she pays {{2}} before that turn. (A player with ten or more poison counters loses the game.)

Snakes on a PLane
by falconpunch8762

Yesterday on Which cards allow you to ...

115.2c Some effects allow a player to take an action at a later time, usually to end a continuous effect or to stop a delayed triggered ability from triggering. Doing so is a special action. A player can take such an action any time they have priority, unless that effect specifies another timing restriction, for as long as the effect allows it.

The only card I can think of that does something like this is Sabertooth Cobra , am I right in that? If so, what are some examples of other cards that allow you to take this action? I don't have a clue how I'd look something like that up on Gatherer.

If you're going for full multiplayer, then your build will really be affected by how casually you want to play. Infect itself will put people on guard already, but if you're not in a competitive group then you could use some cards that otherwise might be too slow. I would say that Triumph of the Hordes is honestly redundant and pointless if you're gong to use creatures that already have infect in abundance. What it does help with is creatures that have poison x but not infect like Sabertooth Cobra or Virulent Sliver.

That's the casual stuff though, and is on par with Giant Growth effects. If you want to play high end magic, then you'll want play dirty. Things like extra combat step and extra turn cards and honestly end up playing like a Narset deck. In multiplayer games, a general rule to take note of for infect is no blockers equates to more damage than higher power (in my experience at least).

Sabertooth Cobra can be an interesting card in snake tribal as like Blight Mamba it offers a different way of winning that becomes so much easier with Kaseto.

I think there's too many snakes on this plane.

Hey how's it going, just want to say thank you for bringing attention to this deck as I enjoyed looking through it. I think the people before me did a good job with commenting on the deck and helping you edit, the only thing I could think of is maybe take out some of the weaker/non synergistic creatures and add in more snakes, Sabertooth Cobra for instance is a 3 drop for a 2/2 that gives 3 poison counters and costs less than a dollar. Other than that if you're looking for a tutor I am using Tamiyo's Journal since you can potentially use it more than once and it's easy on not breaking the bank like other tutors. However all of this is purely my opinion and again I would like to say good deck, good luck and have a good day.

I got you under my skin

I'd recommend Rogue's Passage and Temple of the False God for your mana base, the former to deal some direct damage easily and the latter helps ramp. Marsh Viper and Sabertooth Cobra, perhaps?

If I plan on making it a modern deck or focus more on infect Rot Wolf is a good option, but I do plan on keeping it pauper for now. Sabertooth Cobra is in because it hits on both fronts, making Blighted Agent the only one that solely deals with poison and may need a replacement.

If I do add another color those are great options on top of Attune with Aether. Forgot Manamorphose was a common originally.

Was thinking about Tainted Strike if I add black since it can kill with infect out of nowhere. Hand of the Praetors is good if it becomes modern.

i know this is a casual deck, but swapping out Sabertooth Cobra will make this deck modern legal. Rot Wolf is a decent 1-1 swap, otherwise there are other options, but usually decks working with infect/poison counters tend to avoid doing regular damage (otherwise your essentially putting your opponent at 30 life).

If you do add another color (or even if you don't), consider adding cards like Evolving Wilds or Prophetic Prism/Manamorphose to help with color fixing/filtering.

adding black does seems like the more useful route, Die Young gives you an outlet for your energy counters (aside from buffing creatures on attack) but also the ability to infect your normal creatures (Tainted Strike), and buffs from having infect (Hand of the Praetors) and other fun things.

@Errast - Sorry for the delayed response, I've been on vacation.

Whirler Rogue is not bad at all. Seems like a better Patagia Viper. I'll have to consider where to fit her in.

Plaxcaster Frogling has come up in my research multiple times. I guess the fact that he doesn't trigger Ezuri kinda turned me off, but his ability to grant temporary shroud is pretty useful. That said, should someone target a creature of mine before combat on my turn, that creature could not gain counters from Ezuri. That may be situational, but I feel like it's something to which my playgroup would catch on rather quickly. So in my eyes, he's still a maybe. Convince me otherwise, and i'll put him in.

Phyrexian Swarmlord actually used to be in here. I took it out simply because I never saw it. And when AEther Vial, Yisan, the Wanderer Bard, or Birthing Pod hit 6 cmc, Triskelion always took that slot. So while it is by no means a bad card - quite good, actually - it just isn't in the list at the moment. I own the card, so it is possible he might waddle back in someday.

Triumph of the Hordes is in my deck, but not on this list. So I gotta figure out what happened there.

Corrupted Conscience also used to be in, but it's just not what this build is going for.

Magus of the Future is rather enh, in my opinion. I'd rather not let my opponents know that Sage of Hours is on deck, or that I'm about to greet their Cyclonic Rift with Stubborn Denial.

@tiassa - insta-wins are important, and you'll note that I have a few!

Putrefax is one of those cards that I own and used to be in the build, yet just didn't see too often. For Birthing Pod effects, it competes with Seedborn Muse. I'll have to reconsider the card. Thanks for bringing it back to my attention.

Sabertooth Cobra is not what I would consider an insta-win. It is, however, a card that i had never before seen. An interesting suggestion, and one that I'm willing to entertain.

I really appreciate the suggestions from both of you. What would help me even further is if you, as well as other commentators, would suggest cuts along with your card ideas. It is extremely hard to find cards to drop after working on this list for so long. Thanks!