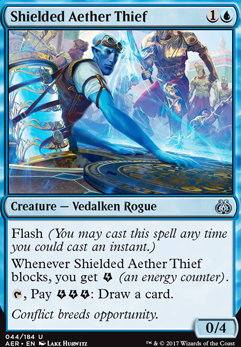 Whenever Shielded Aether Thief blocks, you get (an energy counter). 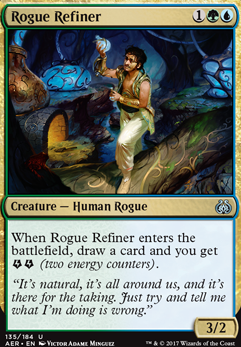 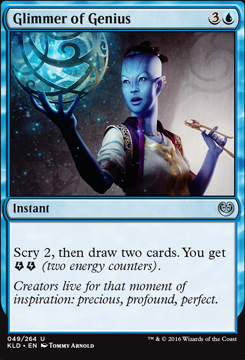 Yarok, the Energy Hoarder
by Littlelangy

Charged Up Izzet - Energy
by Mercuteio

4x Champion of Wits holds off early aggro, you can also sift 2 (optional). dies to removal or blocking. late game 4/4 that draws 4

its coming together but i think there are some changes you can make to refine it a bit further.

here are my suggestions:

1x fumigate ( 4 is way too many) 2x settle the wreckage is good i would cut opt all together, its rather weak. you absolutely need 4 copies of Glimmer 2 essence scatter is fine 4 Disallow is an absolute addition - it counters everything, even activations or planeswalker emblems 1x pull from tomorrow cut kumenas awakening - its too slow and gives the opponent card advantage early game. turn 4 kumenas is just not what you want to be doing facing aggro as its too slow, and against control it gives them cards. champion is great, 4 is must. but you need more blockers for aggro. add 4 copies of Shielded Aether Thief it blocks and triggers mill, plus has flash and combos with Glimmer. seal away is a must have 4 in this deck psychic corrosion is must 4 i would only have 2 copies of patient rebuilding 1x River's Rebuke is a possible addition at least 1x Negate mainboard possibly 1x-2x Cast Out mainboard (it also cycles to trigger mill) Authority of the Consuls possible sideboard possibly Dovin Baan as a cheaper alternative to Teferi Invoke the Divine sideboard

To jtf256, I would use Disallow, but that is too expensive for my tastes. I'm trying to keep this budget, for me and for others. Trust me, if this wasn't budget, Disallow would 100% be in here. It's depressing to use Cancel. Also, Shielded Aether Thief looks pretty good! I didn't even know that that card existed. I'll try to mainboard it with Champion of Wits.

Last, but not least. Thanks for trying out the deck! I'm glad to hear that I'm not the only one who finds this deck to be really fun!

I've also used this deck in MTG Arena, i lost mostly to aggro and decks that have had Gaea's Blessing mainboarded, the mill stops entirely against those decks, the creature drops seem like they can be flexible, i personally run Shielded Aether Thief sometimes instead of Homarid Explorer other than that this was mad fun to play +1

Itâs really funny you suggested the single kefnet because originally I had a single kefnet originally. Maybe Iâll slide it back in. I agree more draw is needed. Iâll up pull to 3. Idk why I wasnât already running field of ruin thatâs a great suggestion. Since Iâm adding field of ruin I might go up to two excavators. You are also right that 25 lands plus commune is enough lands.

All your suggestions were spot on!

I think I donât have enough early plays tho. I will get murdered by mono red. The only cards I can think of to stop that from happening are River Hoopoe and Shielded Aether Thief. Can you think of anything else?

A couple of cards I don't really enjoy in this deck are:

Groundskeeper since 1/1 for 1 with no ability tends to be bad, and his ability very really does something useful.

Shielded Aether Thief since you don't have an Energy build, it really almost reads like a flash 0/4 wall, which, if you face a lot of aggro decks, may not be the worst thing to be doing, but otherwise is very underwhelming.

Fork in the Road, even though it has the potential to interact with Groundskeeper, 2 mana for getting a bisic in your hand, is just what what you want to be doing.

Lifespring Druid is not the worst thing in the world, but it's definately underpowered, even compared to the rest of your list. The thing that makes me resent it however, is that your best cards are your 4 drops. But it does fix your mana, so maybe it's worth it for now.

Reach Through Mists. You should really cut your deck down to 60, but for as long as you're playing with more than 60, this card is completely dead, since it's only purpose is to increase the deck's consistancy. Something you could do naturally, without spending mana on by just removing it from your deck completely.

Thanks for the suggestion. As for this deck I would agree that something akin to Shielded Aether Thief would be a good idea at lest in the side for the aggro match up but this deck is pretty much retired for now. My buddy issued me a new challenge; Mono Red, lets see what laughs can be in store next.

You can check the deck out here: 40 Shock!