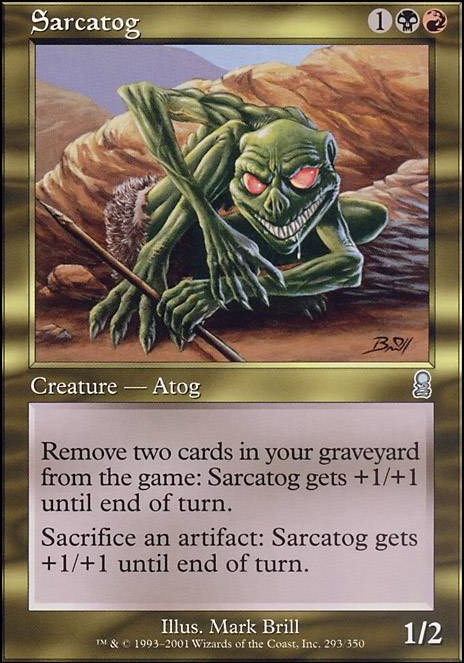 Remove two cards in your graveyard from the game: Sarcatog gets +1/+1 until end of turn.

Sacrifice an artifact: Sarcatog gets +1/+1 until end of turn. 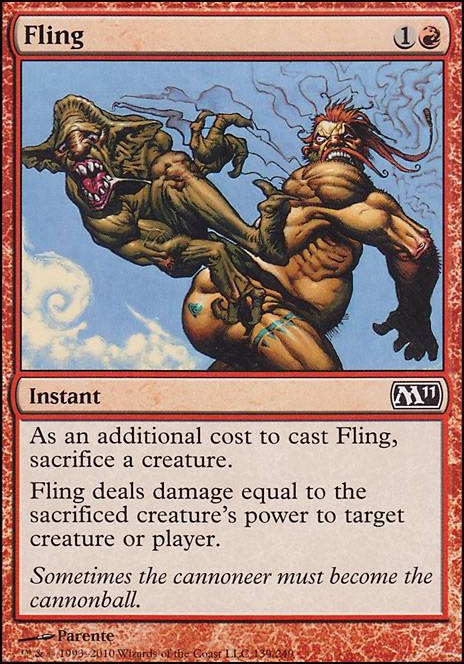 My Flesh and My Body, Consume It All!
by ShammySL

"When you sac Mirror of Fate , which is part of the activation cost, it goes to the grave. You can then hold up priority and use Faerie Macabre , discard her (which is also a cost) to remove her and the Mirror from the grave and put the Mirror and faerie on top of your new library."

The following interaction you just described is illegal according to rule 601.2. Whenever you cast a spell or activate an ability if that spell or ability would target an object, the object(s) you intend to target must be a legal target before costs are paid. This is because all spells and abilities and their corresponding targets are always announced before costs are calculated and paid for.

Given the scenario you just described you would be able to exile the mirror with Faerie Macabre 's activated ability, however; you would be unable to exile the Faerie Macabre to itself. Do note this only happens if a spell or ability targets. The exiled cards you choose to put on top of your library with Mirror of Fate don't have to be legal choices before it's ability is activated - they just have to be legal upon the moment it resolves which means you can put the Mirror in your new library if you are able to exile it before it's ability resolves. If Faerie Macabre instead read as: "Discard Faerie Macabre: Choose up to two cards in graveyards. Exile those cards." then the scenario you listed would be able to work as you described.

That said, there are still ways to cycle Mirror of Fate without the Faerie Macabre . These cards with the Mirror will still generate the same effect: Tormod's Crypt , Nihil Spellbomb , Sentinel Totem , Purify the Grave , Remorseful Cleric . If you want a repeatable exile effect that doesn't need to be exiled to work I'd recommend cards like: Withered Wretch , Grim Lavamancer , Sarcatog , Scrabbling Claws , Relic of Progenitus - These cards can stay on the battlefield while reliably being able to exile your Mirror at instant speed.

I thought this interaction was really cool, which is why I went out of my way to find alternative card options in case I ever decide to run something like this in my own deck. +1 for the potential card synergy and creativity.

I'm back! And I added everything. Sorry I missed your deck Zuty.

We also have new decks to debate in the comment section above. (Ruffigan/NeverTheTwelve)