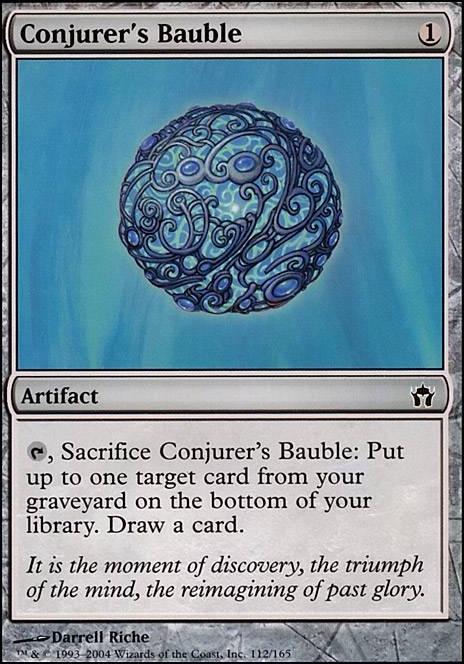 Tap, Sacrifice Conjurer's Bauble: Put up to one target card from your graveyard on the bottom of your library. Draw a card.

Conjurer's Bauble occurrence in decks from the last year 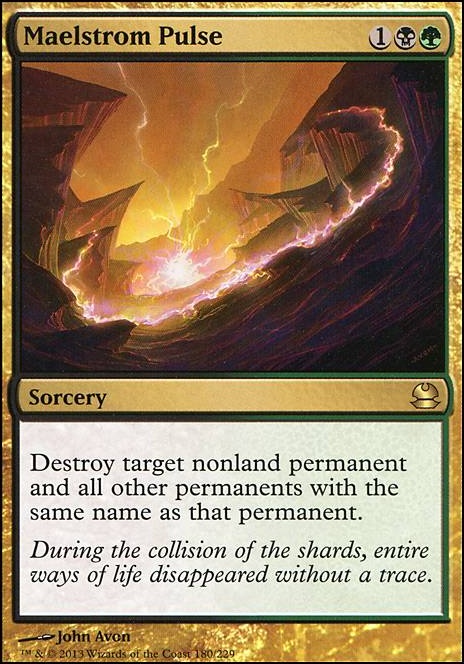 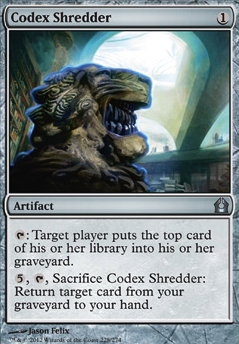 Emry, Lurker of the Game
by nspeidel

my favourite emry combo is using Basalt Monolith plus Mesmeric Orb to mill your deck. Then use Emry to cast Conjurer's Bauble from the grave targeting Freed from the Real to put it back into your deck and draw it. Cast Freed from the Real and use it to untap emry. Use Emry to cast Lion's Eye Diamond from the graveyard. You can then generate infinite mana to do with as you please. Put your deck back into your hand with Conjurer's Bauble , cast Walking Ballista for infinity and ping opponents to death, cast altar of the brood to mill everyone or something else I haven't thought up.

sergiodelrio thanks for the feedback.

I dismissed fetch lands at first because I had Night's Whisper and Sign in Blood and I was worried my life total would be crushed, but now that I replaced them with Conjurer's Bauble and Chromatic Sphere I think it's fine, so thanks for reminding me!

I'll be adding fetch lands as soon as I can figure out how many. Thanks!

You should try to add in Conjurer's Bauble since it cantrips and can protect your cards from Surgical Extraction .

You might need Time of Need to get Emry, Lurker of the Loch more consistently.

If you manage to self mill more Postmortem Lunge and Unearth serve as aditional ways of getting your creatures to the battlefield.

Joe_Ken_: Yeah, the boros counterspell stuff is due to my playgroup (and the cEDH community in large) being very blue heavy. But if your playgroup doesn't play a huge amount of control then more power to you.

I run Conjurer's Bauble primarily as a way to recur lost combo pieces. White white can kind of do it, I like bauble as it acts not only as a cantrip but also forms a recursion loop with Auriok Salvagers (and a combo loop if you include Lion's Eye Diamond ). Objectively its ok, but subjectively I really like the card.

As for Umezawa's Jitte , it's basically just repeatable removal. It's great for killing mana dorks/stuff that's causing you issues and it also turns Aurelia into a 3 hit clock since you can give her +4/+4 every time she connects.

enpc Love the deck and I could imagine opting back to Helm of the Host combo back in my other deck with removing some of my big beatstick angels that donât really do too much. I think I will also pick up Sword of Fire and Ice , Wheel of Fortune , as well as Endless Atlas for the deck for some good card draw. Other than that I donât think Iâll go for some of the Boros conterspell stuff you have going on since my groups normally donât run too crazy of cards in their deck that require a counterspell rather than a Boros Charm or Teferi's Protection

What are your thought on Conjurer's Bauble and Umezawa's Jitte since I think those two are fairly interesting.