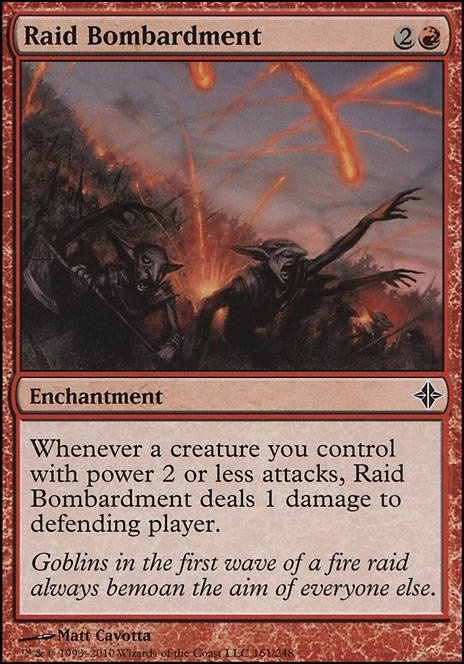 The store owner at my lgs agreed to hold pauper tournaments on sunday afternoons, but only if I could make 5 $10 budget decks complete with a sideboard that captures the essence of each color. The plan was to have a 3 round swiss with a purchased booster pack as the fee, and if you wanted to rent a deck it would cost you an additional $1. If you wanted to buy it, the deck would be $15. So I got to brewing.

Introducing the Mono-Red version of my $10 budget series! This deck was surprisingly the hardest to build in the series. Every "efficient" burn spell was at least a $ and red lacks powerful top end creatures. After realizing this, I decided to create a goblin themed deck centered around Impact Tremors and Raid Bombardment . It's fast, it's mean, and it's red. Special thanks to Boza for the help.

Please share this deck and business plan with your lgs. As a community it's important to spur the growth of the format and hope that one day Wizards might actually pay attention to it.

The rest of the series can be found below by clicking the links:

Heroes of the Plains

So my lgs has seen an explosion of players ever since EMN, mainly because there are a lot of Vintage/Legacy players as well as hipsters who are all excited about spikey competitive combos. We used to have 8 to 14 players show up to play, but now there are up to 20. I'm not complaining at all, I just wish the field wasn't comprised of 7 Drake decks (4 UR, 2 UB, 1 RUG). In order for my budget decks to survive, they must adapt.

I've included an instant speed answer to the deck via Collateral Damage to handle the nasty little Drake in response to a Ghostly Flicker. I figure if I don't have enough creatures to sac and extend the game, the deck has already lost. In addition I've included Thermo-Alchemist which looks to be really good in conjuction with the token-damage engine in place. Since most of the deck's creatures are small and will die to Collateral Damage or roadblocks, I thought it would be nice to add Otherworldly Outburst as well.

The sideboard sees new additions too like Outnumber and Stone Rain which are there to combat Drake decks as well as any decks that need land for value.

This will be the first deck I'll be testing with results posted since the new meta changes, so stay tuned.