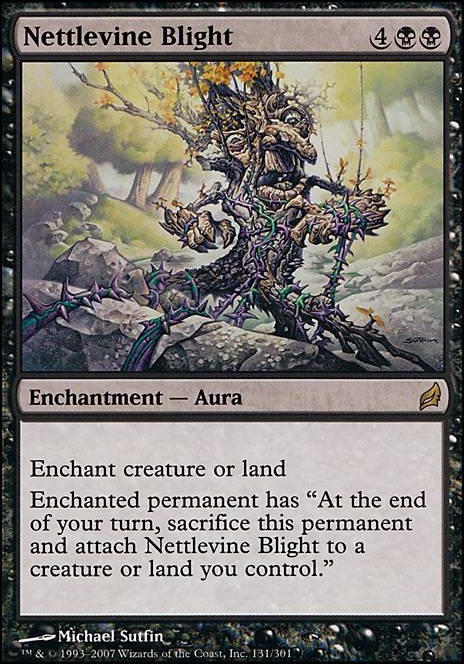 Enchanted permanent has "At the end of your turn, sacrifice this permanent and attach Nettlevine Blight to a creature or land you control."

Will of the Dark Gods
by MisterRoach

More Human Than Human
by Dpm0196

Braids, Cabal Minion , Nettlevine Blight : I was just looking for things to make people sac LANDS. After the first round on Braids, Cabal Minion you would be able to sac other players stuff if you wanted. No pain. The other land sac cards were NOT budget.

Not sure what Underworld Dreams does here? I would replace it with Unnerve , Reign of the Pit , Arterial Flow or Stronghold Rats

Why not try a Nettlevine Blight for continuous punishment? I realize the BB is not ideal for a 3 color deck but with a tiny bit of tinkering in the landbase, it'd be totally doable

Champion of Stray Souls Waste Not and Nettlevine Blight because I derped formatting.

I feel like Nettlevine Blight would be pretty decent in here.

Like, first up I'm not seeing much in the way of stuff that makes me think "exploration". This feels like a low quality modern cube? It doesn't feel like it provides a coherent theme.

The only two clearly signaled archetypes are U/G and W/B. Even then, W/B has a lot of stuff I wouldn't take like Tainted Sigil, because it is a 3 mana gain life card, and just gains life.

I think one issue you have is...this is an 12 person cube. This means you are gonna struggle to have stuff wheel, archetypes are less viable compared to just grabbing value, and if you draft with less than 12 you might never see important archetype enablers.

Secondly, I would push the themes harder in terms of exploration. Like U/W lands as creatures is cool. That can be pushed further. That can cross over into something like U/B lands with cards like Nettlevine Blight or Underworld Connections or Sire of Stagnation that punishes peoples for lands. Then that can cross over into something like a U/R spell slinging Retrace deck, where you can turn excess lands into spells or spell equivalents with Molten Vortex and Flame Jab, which can intresting stuff going along side it such as a G/W Desert deck?

Like, if you want it themed hard, then I would really suggest breaking the idea down into three parts, so for exploration you could have "monsters lurking in the shadows", "new places to explore" and "heroes going exploring" and divide stuff up between them if you get me?

Ultra-Budget: The Thing That Should Not Be

Sagarys well one card I really like in black is Blood Reckoning then there are cards like Nettlevine Blight or the cheap version of that: Brink of Disaster to slow your opponent/destroy their resources or play stuff like Contaminated Bond to stop small creatures early on...

Hope that helps a bit