Slaughter Games can't be countered by spells or abilities.

Name a nonland card. Search target opponent's graveyard, hand, and library for any number of cards with that name and exile them. Then that player shuffles his or her library.

Rakdos is Merciless
by opticnirv

All Pain, No Gain
by thestorebrandslimshady 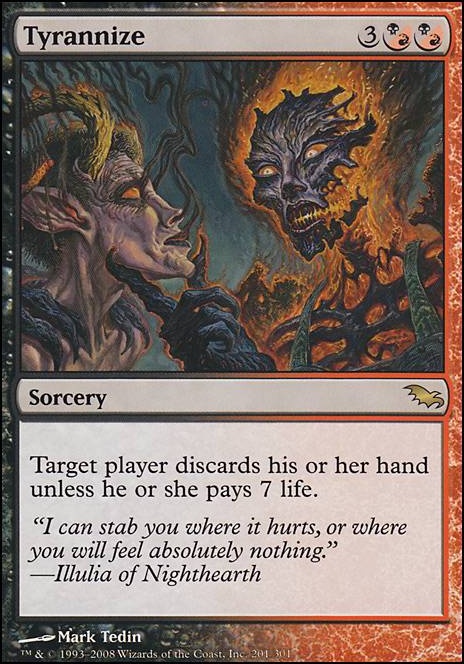 I'd question Unlicensed Disintegration in a format with Dreadbore / Angrath's Rampage / Bedevil particularly since you can gain a prowess trigger from a sorcery as easily as an instant.

You might want to add a sideboard, I'd suggest Rakdos Charm / Alpine Moon / Slaughter Games / Sorcerous Spyglass and Duress would be sensible inclusions...

I hope these suggestions help, good luck with your deck.

I was thinking about taking out 4x Lightning Bolt for 4x Inquisition of Kozilek but it never felt satisfying during playtesting. It felt like i had very dead cards unless i had one in my opening hand.

Of course my playtesting has been kinda superficial and my friends mostly play aggro decks so there's that...

I guess my plancan be slamming Duress and Slaughter Games in the sideboard specifically against combo?

The concern has come up actually, but Emrakul is really hard to remove because of its protection clause once it's in the game, even harder to exile. Cards like Slaughter Games or even my Chandra's +1 are a much greater threat in regards to that imo. I'm not yet convinced this concern is more than a hypothetical one and will only be addressed as soon as this changes.

I'll keep your suggestions in mind, tho!

I've tinkered a lot with various Polymorph/Indomitable Creativity versions, but this Rw version is supposed to be as explosive as possible, while being consistent, which I think I accomplished. I figure a Ux version will play a lot different and gets its resilience from counterspells. This one... well, not a lot of answers to a T2 Emrakul ;)

I don't think that Deathbringer Thoctar is worth it. He is simply to slow and isn't on the same page with what the rest of the deck is trying to do.

I also don't think that Whispersilk Cloak or Swiftfoot Boots are worth it. The likely hood that you are going to draw them is slim and for little reward. If you remove all of what I have mentioned you have room to add either (or any combination of) Shrieking Affliction or Black Vise . Since you are making them discard, hopefully they will eventually not have a hand and these will be a huge win condition in a single and multiplayer game.

I'm not sure that Mind Slash is worth it either, as the only card you have that you can freely sacrifice is Reassembling Skeleton . Instead I would recommend adding 2 Waste Not as he will help you strengthen your board or hand. I realize this is in your maybe board, but I think your main board could very much so benefit form having at least 2 Waste Not . It might even be worth it to remove ravens crime if you replace it with Shrieking Affliction or Black Vise .

I also so that you have removed Slaughter Games and I don't think that was good.I think that this deck would very heavily benefit from 3 Slaughter Games in your sideboard. If you lose the first game, sideboard them in and take out something important.

It might also be worth it to try to squeeze in some Raven's Crime .

TheChaosVault you got to think about it like this. You know your opponents always win with Laboratory Maniac or they always win with Capsize or Triumph of the Hordes or Blue Sun's Zenith etcetera etcetera you get the point. Well just remove it from his or her deck or hand. And even if they had 4 to remove from the deck it's the same a removing one if all they have is one. You still remove them all. Slaughter Games cant be countered. That's Super important.