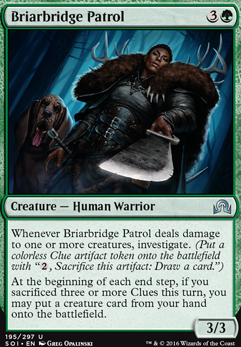 Whenever Briarbridge Patrol deals combat damage to one or more creatures, investigate. (Put a colourless Clue artifact token onto the battlefield with ", Sacrifice this artifact: Draw a card.")

At the beginning of each end step, if you sacrifice three or more Clues this turn, you may put a creature card from your hand onto the battlefield.

Listen, Im somewhat of a Cryptozoologist myself!
by zaerox12345

Ok, that makes sense. As the Twincasters are useful and you are already producing quite a few tokens, how about Esix, Fractal Bloom ? Copying any of your lords whenever you create a tokens seems pretty good.

Also: Briarbridge Patrol is awesome with Tamiyo's Journal . Just use journal's activated ability, tutor for something powerful, then put it down with Patrol at end of turn.

You have inspired me... to build a jank Bant version of this deck using Tamiyo's Journal & Briarbridge Patrol to drop big things for cheap.

This is a really creative and fun deck, I like it alot =)

One suggestion I have is to add Briarbridge Patrol . The investigate on creature damage is not great, but the second ability coupled with Tamiyo's Journal makes up for it in my opinion. Sacking 3 clues to tutor, which 9/10 times will be a creature I imagine, and then getting to play it for free at the end step is stellar.

Yours is a very different Karador deck than my own, but it's the versatility that draws many people to him as a commander. I'd love some input, but beware that I've gone a bit over the top with my maybeboard.

Pieguy396 on Looking for Creatures that Cheat â¦