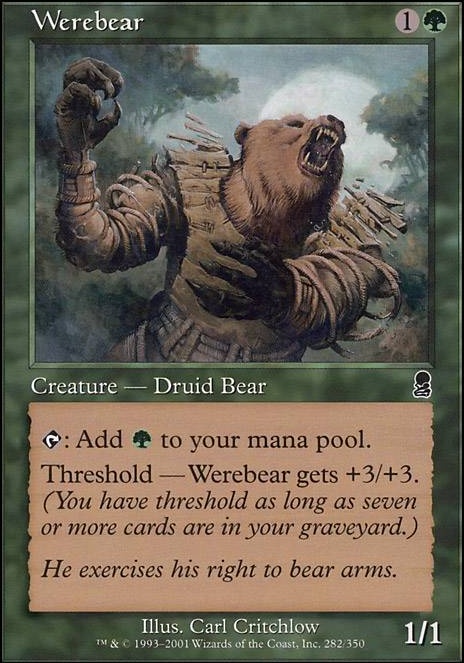 Ayula, Queen Among Bears is the only commander I play. I tried a lot but for me nothing is more fun than just having a blast with some bears. Build a cuddly army of fluffy doom and just have fun XD. Playing bears like River Bear and Pale Bears will even be quite the surprise for all the blue players at the table. Especially if they already starting to ignore you because they think you arenÂ´t a threat. Or just play Bear Cub , buff him up a little and let the little guy fight every big scary thing out of the way due to Ayula's trigger. Thanks to Strixhaven, I recently had a new addition to the deck in form of Ruxa, Patient Professor which makes token generators like Words of Wilding or Bearscape even better.

Rhadamanthus on Spark Double and Helm of â¦

Use double-square brackets around a card's name to create a pop-up. It's the best way to make sure everyone understands what's going on in your question: Spark Double , Helm of the Host

Gidgetimer on Does Phyrexian Splicer require a â¦

Rhadamanthus on Do Sakashima tokens created by â¦

The answer is different depending on whether the Sakashima in your example is currently copying something else. If it isn't copying anything then the answer also depends on whether you choose to copy something or not.

Second example part 2 - Sakashima is not copying anything and you do choose to copy something with the token: Sakashima is currently a Legendary Creature - Human Rogue named "Sakashima the Impostor". Helm of the Host will make a copy and remove the Legendary supertype. If you choose to copy Bear Cub with the token as it enters the battlefield then the token's copy effect will add the Legendary supertype (Sakashima's current Oracle text has been clarified a bit to say "it's legendary in addition to its other types"). It results in a Legendary Creature - Bear named "Sakashima the Impostor". The legend rule will apply and you need to choose one Sakashima to keep and get rid of the other one.