Do sources or players destroy permanents?

Asked by Faiths_Guide 3 years ago

Whenever a source you control would destroy a permanent...

Whenever you would destroy a permanent...

Or does it need to be both:Whenever you or a source you control would destroy a permanent...

Pretty sure it'd be a source. I can't think of any instances where a player themselves is destroying a permanent, as opposed to a source that they control.

What about Aura Shards?

Aura Shards is destroying the Artifact/Enchantment. The way it's worded does sort of make it sound like it's "you" but Aura Shards is in fact creating a triggered ability on the stack that says "destroy target artifact or enchantment". This is actually pretty important because it means protection from White/Green protects from aura shards.

Realistically Aura Shards should be worded "you may have Aura shards destroy target artifact or enchantment". "you" is only really in there because you are making the choice as to whether or not you want Aura Shards to destroy anything.

I'm pretty sure it is neither. "Source" is used exclusively for damage. I think the correct templating would be "whenever an effect you control would destroy...." This would put it in line with the reminder text for indestructible as demonstrated on Sheltering Light.

109.2c If a spell or ability uses a description of an object that includes the word source, it means a source matching that descriptioneither a source of an ability or a source of damagein any zone.

112.7a Once activated or triggered, an ability exists on the stack independently of its source. Destruction or removal of the source after that time wont affect the ability. Note that some abilities cause a source to do something (for example, Prodigal Pyromancer deals 1 damage to target creature or player) rather than the ability doing anything directly. In these cases, any activated or triggered ability that references information about the source because the effect needs to be divided checks that information when the ability is put onto the stack. Otherwise, it will check that information when it resolves. In both instances, if the source is no longer in the zone its expected to be in at that time, its last known information is used. The source can still perform the action even though it no longer exists.

Abilities always have sources. I'm not sure about spells though, now that I think about it. Maybe it should be worded as "whenever a spell or ability you control destroys a permanent"

Yeah I thought about the fact that "source" is used for the source of abilities after I posted but editing on here is not a thing apparently so I just left it. I do maintain that neither players nor sources ever destroy anything. "Effect" is the result of a spell or ability and it is what would actually be doing the destroying as seen in the reminder text for indestructible.

yeah agreed. "Whenever a spell or ability you control would destroy a permanent" is probably the best way to word it.

That isn't what I'm saying :P

"Whenever an effect you control...." is the way I am pretty sure it needs to be worded.

That could work, but I don't know of any cards that use that format, there are plenty of cards that use the term "spell or ability", like Baral, Chief of Compliance, Psychogenic Probe, or Willbreaker.

"Whenever a spell or ability you control would destroy a permanent..."

"Whenever an effect you control..." 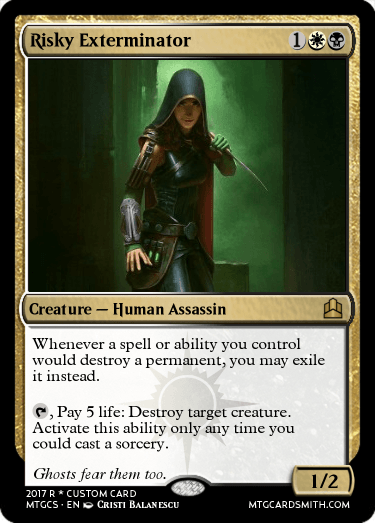 Templating looks fine. Playability and design are a discussion for the custom card forum so go ahead over there if you want feedback on that stuff.

If I had that in play, would it allow me to exile an indestructible creature with her activated ability?

Faiths_Guide no, when you target it with the ability, it attempts to destroy it, but because indestructible causes it to not be destroyed, the replacement effect has no destruction event to replace.

Would this work?Whenever you cast a spell or activate an ability, you may change its text by replacing all instances of "destroy" with "exile."

Yeah that should work. Text replacement isn't used commonly, but that looks to be the correct formatting for those sorts of effect.

Or you could add another ability to the card templated after the archetypes (e.g. Archetype of Aggression).