Helping to continue a cycle

Astral Dragon costs 8 mana. Six generic and two pips. She creates two 3/3 tokens of any noncreature permanent when she enters the battlefield.

To continue this cycle, for Temur, I made Imperious Dragon. 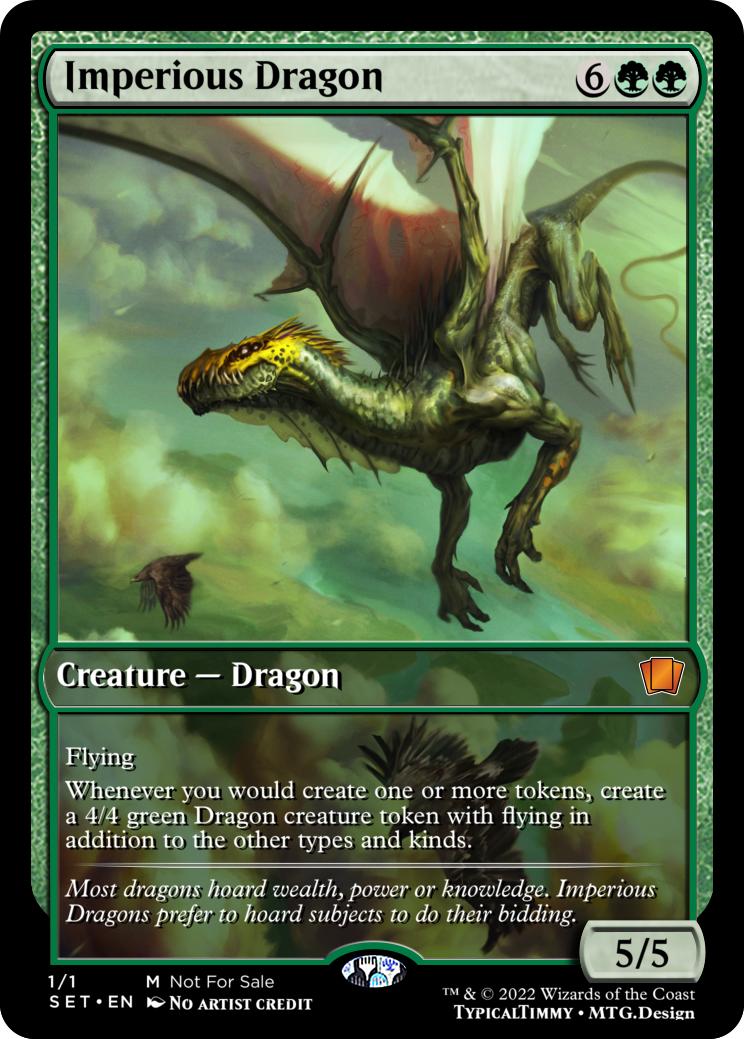 If Utvara had Haste and Astral had perhaps Ward , then I'd give Imperious Defender. Unfortunately, they each only have Flying.

Looking at it a little closer, both Utvara and Astral make DRAGON tokens. So to truly continue the cycle, Imperious would also need to create Dragon tokens.

I had it originally slated to essentially be a Parallel Lives, but that doesn't work. So I revised it on MTG.Design. Should update in a bit, if anyone comments beforehand.

Looking at what "would" happen is something replacement effects do. Looking at what did happen is what triggered abilities do. You need to bring the templating into accordance with one or the other. Since this type of effect is usually a replacement effect (denoted by "If...would...instead"), I would change it to a replacement effect using Chatterfang, Squirrel General as inspiration. "If one or more tokens would be created under your control, those tokens plus a 4/4 green Dragon creature tokens are created instead." Alternatively you could make it a triggered ability, but you would have to exclude tokens made by itself. To do this I would take inspiration from Kodama of the East Tree. "Whenever one or more tokens are created under your control, if they weren't created with this ability, you may create a 4/4 green Dragon creature token."

Gidgetimer, which do you think works better? I think perhaps a triggered ability is more aligned with the other two, as Utvara is a combat attack trigger and Astral is an ETB trigger.

And overall, how do you like the design of the card? I feel like perhaps I should stick to regular 4/4 red Dragons but that seems a tad silly to me, having a mono-green Dragon create mono-red Dragons. Although the color of the tokens shouldn't matter, since it is the color of the primary nontoken creature we are concerned with here.

There are many cases of cards that are one color giving tokens of another mono color. The easiest one to think of is any non-white card with embalm. I would like sticking with 4/4 red Dragons just to minimize the number and type of tokens in the game. Not that it matters since there are hundreds if not thousands of different token types already.

I am partial to replacement effects for messing with tokens, I'm also not really a fan of the aesthetics of an ability referencing itself. Kodama has a cool design, and I'm sure that they went through a lot of iterations of the ability to make it as elegant as they can, which is why I took inspiration from him. I just don't like it for completely arbitrary reasons.

Overall I like the design. It could be useful in certain decks, but isn't generic enough as to become ubiquitous.

I think you'd want Divine Visitation's templating if you're still going for what's in the mock up.