Hello everyone! This is Pattern Recognition, TappedOut.Net's longest running article series as written by myself, berryjon. I am something of an Old Fogey who has been around the block quite a few times where Magic is concerned, as as such, I use this series to talk about the various aspects of this game, be it deck design, card construction, mechanics chat, in-universe characters and history. Or whatever happens to cross my mind this week. Please, feel free to dissent in the comments below the article, add suggestions or just plain correct me! I am a Smart Ass, so I can take it.

Hello and welcome back! Now that my boilerplate introduction is out of the way, let's talk about one of 's oldest abilities, something utterly iconic to them. It's also something that Wizards considers to be mechanically problematic, though not so much that it still can't be used with certain restrictions on it. 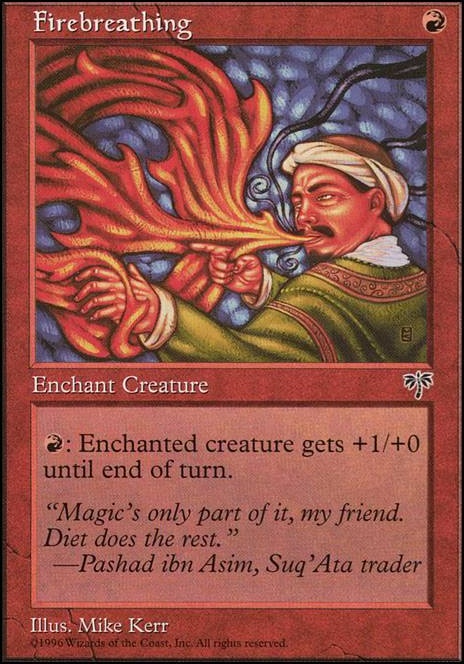 First printed in Limited Edition Alpha, this Aura quickly became shorthand for an entire archetype of abilities found (almost always) in , and was in fact, even included on a creature from Alpha as well just to drive the point home about how awesome the ability is. You might have heard of it. Shivan Dragon? Seriously, that art from Alpha hasn't been beat, and deserves reprinting and proper homages.

Now, I'm going to use the common phrasing here, and when I say "Firebreathing", what I'm saying is "the ability in which you pay for the creature to get +1/+0 until the end of the turn". Yes, there are variations and caveats, but I will cover that later on.

Firebreathing is a very interesting mechanic both in terms of utility and output. It is very simple to understand, yet has some extremely deep options to it, along with limitations that aren't always apparent right at first. Because of this, I use Firebreathing as a teaching tool to teach new players how Activated abilities work. Firebreathing works for new players because they can immediately see cause-and-effect for how the activations work. You pay , and your creature gets more power. And the more you pay - establishing that each invocation of the ability is unique and separate, though you can shortcut it - the bigger the creature gets.

In this way, Firebreathing is very new player friendly. It gives them something to do with their excess and helps impart the importance of math and keeping track of your mana. I like it!

But this simplicity is not without its flaws, something that really only started to become apparent after the release of the Invasion block.

You see, before Invasion, the majority of the decks in the game were mono-colored. Yes, there were two-colored decks, but it was Invasion, and four years later, Ravnica, that really killed that idea and made two-color decks the norm. So in those pre-Invasion days, building a single coloured deck was easy and well-designed around.

However, once multi-coloured decks became more normalized and supported, rather than being exceptional, the real limitation on Firebreathing quickly became apparent. When the activation of an ability costs , but half your mana base is... say... , then your ability to use Firebreathing becomes halved, if not more as you might be using that mana to cast spells or activate other abilities.

So, Wizards created something of a compromise. They experimented with phasing out for +1/+0 in favor of for +2/+0 instead. This... Doublebreathing scales perfectly well with the traditional firebreathing, but iterates in steps of two, rather than in steps of one. For most players this won't be a problem as bigger is usually quite better. But of course, if the person with Doublebreathing only has an odd amount of mana available, they can't use it to its fullest advantage.

In addition, Dragon Engine, first printed in Antiquities, was from the decades before coloured artifacts, so as a Dragon, it should get the ability to breathe fire. But at the time, putting onto an artifact wasn't allowed, so Wizards did their typical substitution and turned one coloured mana into or instead. Yes, there were experiments with creatures with ": Firebreathe", but they had a drawback to help balance that out. Soldevi Simulacrum has a cumulative upkeep cost, while Snow Fortress has Defender.

Other colours also dipped their fingers into this same aspect of , but never to the same extent that did. The most pervasive was of all things, with cards like Order of Leitbur in ancient days, and Mark Rosewater still considers it a Secondary ability in that colour, though ususally as a triggered ability, rather than an activated one, or as a one-shot thing. can also get it, and is usually considered something of a suicide move where the creature in question is not intended to survive the exchange.

Of course, being , they don't just stop there. They also have a couple of (rarely printed) effects which can grant Firebreathing to multiple creatures, rather then just depending on Auras like Firebreathng or Crown of Flames. Homura, Human Ascendant  Flip flips over to grant that ability, and much more recently - a card which stands out in my mind because I've used it to hilariously great effect - is Dragonrage.

Damn, now I have to figure out how to slot that into my Jetmir ManLands deck.

But for all this, Firebreathing really enters into its own, not when you have a lot of mana to throw into it - though that helps. No, it reaches peak effectiveness when you have multiple creatures with Firebreathing in play. Which is what makes Homura and Dragonrage so amazing. Everyone sees the danger of an unblocked - or blocked - Firebreather, but when there are multiple such attackers, then the entire calculus of combat changes. Each creature that is blocked by anything other than a creature you know will die by default is in danger of being killed by pumping the Firebreather. Or if you don't block one, will all the open mana go into that one to deliver a harrowing blow to the undefended player?

Firebreathing is one of those mechanics that hits a nice sweet spot in my eyes of simplicity but depth. It's a known variable on the battlefield as everyone can look at it and count mana, but in doing so, it can also cause confusion by representing the threat of a heavy hit, which can then be followed through on or not a threat and used later in the turn, or even on another player's turn.

It is an ability for all players, new and old. And while it may not seem like much, that's the point. It isn't. It just sits there on a creature, menacingly being a threat. And that's all it has to do. Be a threat. You don't have to punch it up, you just have to have the option to do so, and it will do good work for you.

That's what I try to teach players. Yes, you can do a thing, and yes, that thing can do you. But sometimes, not doing a thing can be the better option because your opponent doesn't know what you're going to do. And Firebreathing helps me teach that.

Well, that or because Char-Rumbler needs to actually hit for damage.

Sorry for the short article. I've gone well overboard with my latest few. But, join me next week for the big 250!

I've always been a big fan of Firebreathing, myself, but always struggle to find the right time to put it on my cards XD

Ghitu War Cry is probably my favorite card with the effect ^^"