Whats a custom card you want to be real?

I love looking at custom mtg cards and seeing what people come up with. So much creativity and ingenuity is on display. So I gotta know fella's, what custom card made you stop and say, "Hot dog little momma that's a real mans card right there, fr fr no cap?"

I would love to give credit to pretty much everybody in the Card creation challenge thread.

Lots of great designs in there, and there's no way I can pick out even a top 20. I don't really go out of my way to find other custom cards. But skim through there (it's more than 750 pages at this point) and find some that stand out to you.

An enchantment or land that gives your Graveyard Hexproof..

Your graveyard cannot be the target of opponents spells or abilities

Your graveyard cannot be in exiled

that_dude33 Yoshimitsu? I love it.

I have never felt so old in my life.

The custom cards forum is for yogurt and phi males.

that_dude33 i don't think there are any cards that target a graveyard. if there are, giving the grave hexproof wouldn't stop grave hate that only targets a specific card, since it's the card being targeted and not the graveyard.

Cards do not target the graveyard, they target the player's graveyard. For example, Bojuka Bog. If the opponent has Orbs of Warding, you can't hit their graveyard because you hit it by proxy of hitting them. Unless I am mistaken (Entirely possible), we do not target zones, rather objects and players. So for example, we can target a player's library and force them to mill, but we are not targeting the library itself.

MensRightsFTW Thatâs fair. You get the idea tho, something to stop or prevent graveyard hate

Best way to thwart graveyard hate is to give yourself hexproof, a la Orbs of Warding / Aegis of the Gods / Leyline of Sanctity. Things of that nature.

that_dude33: Ground Seal. you're welcome lol. granted, it's symmetrical "shroud" and not one-sided "hexproof", but depending on your deck, that might not even matter.

MensRightsFTW what about Relic of Progenitus. Part of my idea was a land or enchantment that says Cards in your graveyard cannot be exiled

These are a few I came up with a few years back. 2nd was my attempt at a color shifted Animar.

Whenever a nonland permanent an opponent controls is put into a graveyard, each other opponent sacrifices a permanent of the same type.

Protection from White and from Green.

Whenever a creature is put into your graveyard from anywhere, put a +1+1 counter on Decimar.

Noncreature spells you cast cost less for each counter on Decimar.

TypicalTimmy there are loads of cards made that target cards in a graveyard. Obvious stuff like Surgical Extraction, as well as more subtle interactions like Snapcaster Mage, Unearth etc

Oooh, and a Vamp I'm particularly proud of.

This one felt like a flavor home run in my not so humble opinion.

What that_dude33 is asking for is a card that prevents the graveyard in totality from being targeted. My point is that the graveyard itself is never the target, rather the individual contents of it are. The only other exception is targeting the player whom controls the graveyard, such as Angel of Finality, targeting the player, not their graveyard. Therefore, if the opponent has an Orbs of Warding, Angel of Finality can not target them, thus it can not view their graveyard for its exiling effect of the ETB ability.

Unless an ability is worded as one of the following, it'll never target the graveyard itself:

Instead, what we see are wordings such as:

I actually made (a now-outdated) deck for my card shown below: 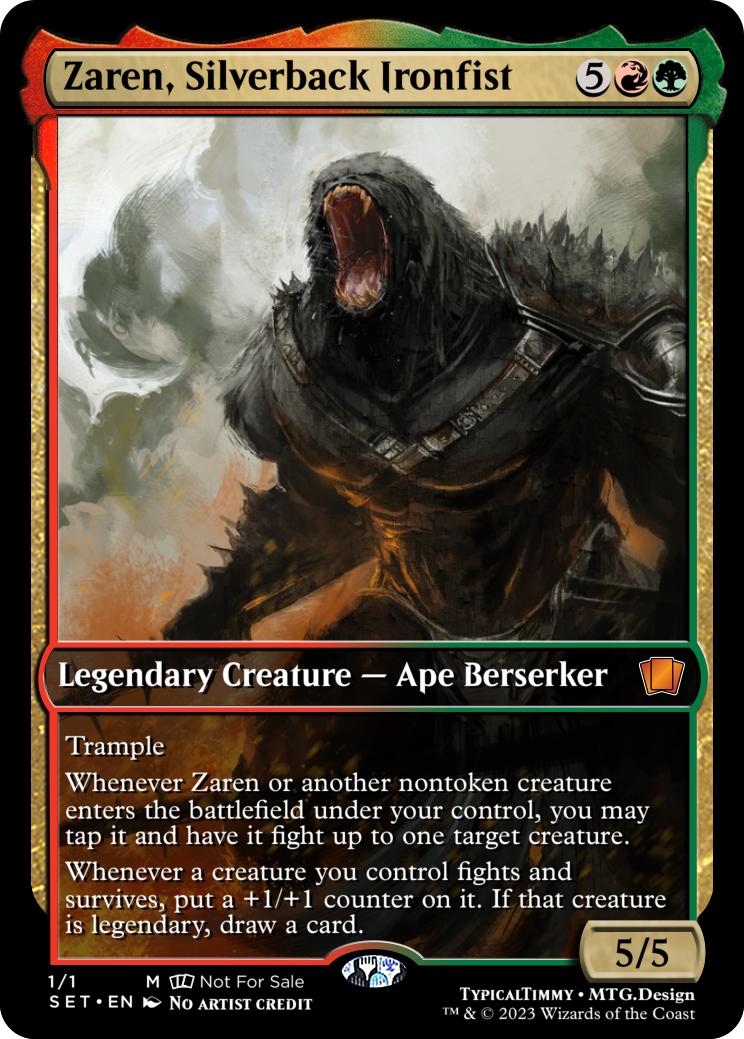 He has gone through multiple revisions and tweaks because of how absurdly powerful this Commander is. He turns every single creature spell into spot-removal, with a permanent anthem effect in the way of +1/+1 counters. Not to mention his draw ability.

Building legendary tribal, you can see how every single one of your 1 creature spells has the potential to remove 2 threats and draw you 2 cards.

I believe the challenge of the aforementioned custom card thread was to create a Commander for a niche that does not yet have one. Since fight does not have a deck dedicated to it, I made Zaren.

Then, I found out why it doesn't and likely never will.

"why? because F U thats why" Garruk.

MensRightsFTW that is the point of the thread, making up cool cards ;)

TypicalTimmy we both know how the graveyard is directly interacted with (via player or card targetting), that wasnât my point. Others here donât appear to fully understand how such zones interweave with the game, and I was trying to give the full picture. Saying that a graveyard is only interacted with via player interaction isnât true, as people can also directly target cards within it. As was already posted, Ground Seal serves as a great way to protect a grave.

For someone to brew a competent card, they need to fully understand how it can interact. I was just trying to widen the view beyond that of âgive the player hexproofâ.

A potential way to widen that gap, then, would be something similar to this:

Sanctity of the Damned

Cards in graveyards can not be the target of spells or abilities.

Avacyn spent eons cleansing Innistrad of the nightmarish atrocities that resides within, but it was only through a brief moment of clarity that she realized the true darkness is that which lurks beneath.

Now a card such as Snapcaster Mage won't work.

Angels are my favorite tribe in Magic, and I know Giada, Font of Hope exists, but even then there are angels outside of mono-white I want to run like Aurelia, the Warleader and Archangel Avacyn Â Flip. I've made a Giada deck that is rule-zeroed into a Boros deck, but I'd still have to ask everyone I play with if they're fine with me playing it. I've also built Kaalia of the Vast, but it's just not the same since she's a human. Give me an angel commander with at least boros colors and cares about card advantage dangit!

TypicalTimmy how is "sanctity of the damned" not a strictly worse Ground Seal?

You guys have been clamoring about making "graveyards" unable to be targeted, and I've been saying how they aren't the targets and how you need to either make the player unable to be the target, or in this case cards within the graveyards.

You're all asking for custom cards as well.

I answered multiple times, and now all you want to do is get pissy because something I made in the fly works, but isn't "competitive"?

Get bent. I'm unsubscribing from this thread. You all can argue amongst yourselves.

Anyways, I really like keyworded mechanics that already exist, but haven't been keyworded yet. I've been trying to codify these, like in Mindburst, which is "Whenever this creature deals combat damage to a player, draw a card."

yeaGO edit: person above me has multiple accounts

1 week and already so unpopular you have to make a second account. Wooooow.

For custom cards I want to be real.

When Soldier, Poet, King enters the Battlefield, you become the monarch and take the Initiative.

Other players cannot take the Initiative if they are the monarch.

Other players cant become the monarch if they have the Initiative.

I love both of these mechanics in commander but if one person gets both, generally the merge into one "super-monarch". The idea is that it stops other players getting both and makes them pick which one they want

TheOfficialCreator: you need to chill. i am objectively not the one in the wrong here. i'm not the one who started insulting people. i wouldn't need to make multiple accounts if the first didn't get shadow banned for no reason. i literally did nothing wrong. how is it that TypicalTimmy isn't getting shadowbanned? i genuinely want to know.

MollyMab: i literally did nothing wrong. people just wanna whine and the devs back it for some reason.

Why do you think you are shadowbanned?

MollyMab: probably because timmy whined to an admin. nobody was even being mean to them.

Not what I asked? Why do you think you are shadowbanned. In what way are your responses hidden?

MollyMab: well your wording was ambiguous. its easy to tell you're shadowbanned when your deck descriptions get deleted, and especially when the entire deck is deleted.

What did the deck description say? Right now all it seems to me is you are just being generally loathsome and failing at making the website work

MensRightsFTW3 - No sir, you have been an inflammatory argumentative douche who derailed this entire thread. Welcome to ignore btw!

Last_Laugh that is blatantly not true

Last_Laugh i literally cannot comprehend how you would think that. i was originally talking to that_dude33, and that person had ZERO problems with anything i said.

real quick before i get banned again, props to that_dude33 for not being butthurt about anything i said, unlike these other dweebos rofl.

Nah. I stand by it. You aren't making us butthurt. At the end of the day, you really do not matter. You have no influence, we do not care enough about your opinions. You are just unpleasant in the way that isolates you. I hope you do not remain that way.

Another card I want to see

MensRightsFTW3 Almost 1/4 of the comments on this thread are you arguing a valid point from Timmy. How is that NOT you being argumentative and derailing this thread? If you're complaining about people's reactions to your nonsense... take a damn look in the mirror. 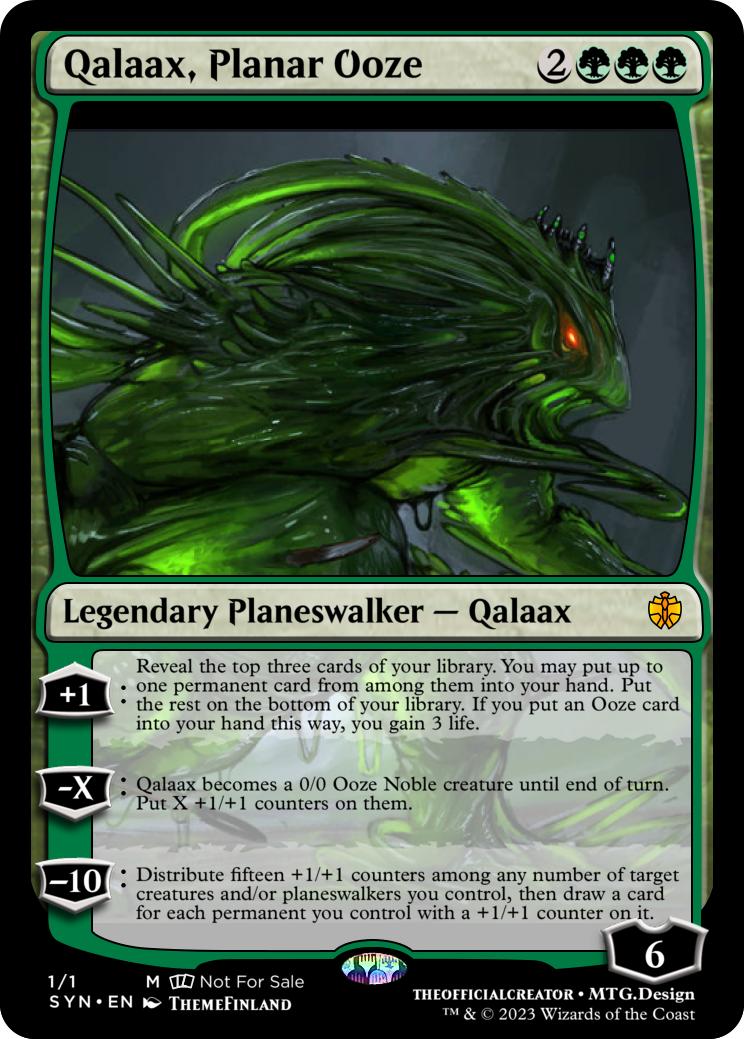 I like the idea of an Ooze planeswalker. Oozes are probably my favorite tribe, and they're so undersupported :(

Last_Laugh timmy literally did not have a valid point because they did not understand the conversation. timmy blatantly ignored any comment involving Ground Seal. you are objectively wrong here.

Last_Laugh: again, you're the one cursing, thus proving my point that i'm not the one starting problems. it's mind boggling how backwards your logic is. is every day leg day for you? cuz that was quite a leap you made.