My idea of what a Battle card may look like 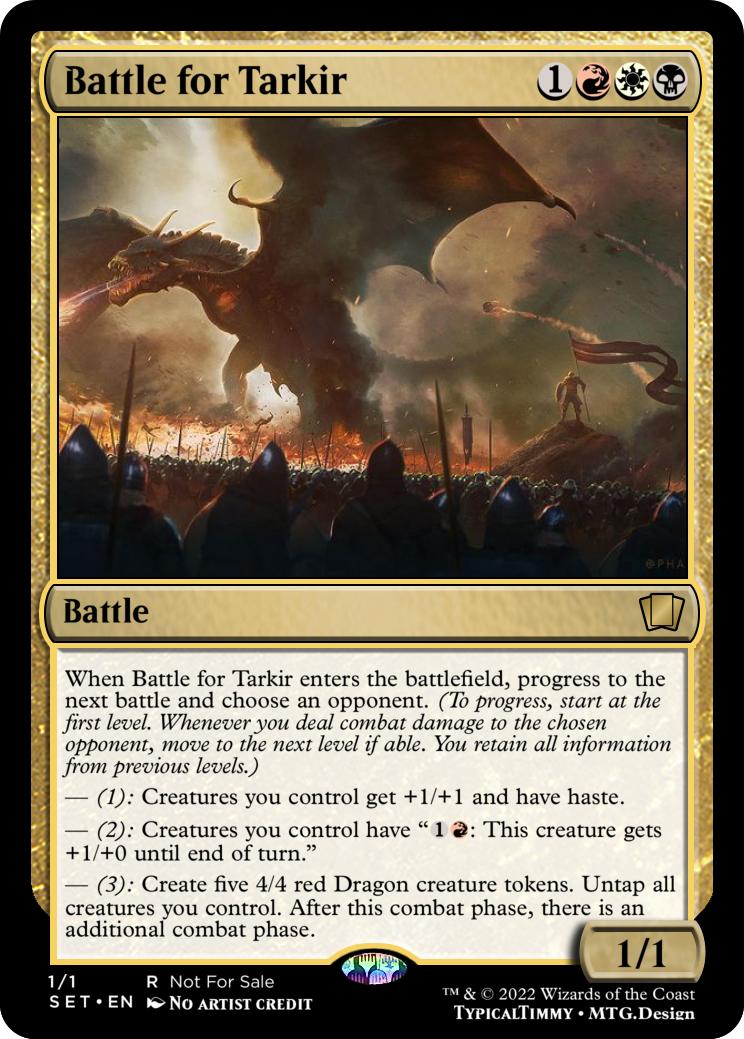 I was trying to think of what mechanically may set a Battle apart from a Sorcery or Enchantment.

This still feels like it could have been a subtype rather than a regular type, but this was my idea.

I think choosing an opponent is both mechanically and thematically appropriate. In non-1v1 games, you could theoretically land the final progression in a single combat phase if you hit each opponent once. That may be too powerful. As for thematically, it makes more sense to wage a battle against one specific opposing force, then multiple.

Although I'm sure it could be something like the Contraption cards where they aren't permanents but still exist within the game.

But they also must be contained within your library, otherwise Atraxa won't see them. So they can't be akin to a Dungeon or Emblem that exist outside of the game, almost like a token.

It MUST be a physical card, that can physically sit within your library, legally. This means it is a spell, and may or may not be a permanent.

Disregard the {1/1} statline. That's an error from MTG.Design

I got it to read Battle by selecting -BLANK- for the type field, then manually writing Battle in for the Supertype where you add Legendary / Snow / Tribal / World.

What if... they're buffs but can be taken with combat damage? Like the Monarch token, but actual cards.

Battle (Whenever an opponent deals combat damage to you, they gain control of ~).

But, like the one you made, this is basically just an enchantment at it's core. Definitely a conundrum.

I think youâre right to guess that itâs something of an offshoot from sagas. Iâm holding out hope that theyâre going to move back towards world-enchantment-style legend rules. I feel like every opportunity to move people away from the solitaire gameplay should be taken. You donât all get to have your own Battle of Tarkir lol

YOU GET A BATTLE FOR TARKIR

AND YOU GET A BATTLE FOR TARKIR

YOU ALL GET BATTLES FOR TARKIR

Do the effects stick around once you get to the third point, or does the card go away?

I could imagine a battle card be a bonus for a player who teachers certain criteria. So like a battle of instants, first player to cast 3 instants in a turn draws 2 cards or something

"The idea behind skirmish was that we wanted there to be a battle between you and your opponent. This battle would be overlaid onto the game and would generate effects that affected the game... The Skirmish token had a tiny "game board" on it showing a field of combat. When you performed one of the stated conditions, you advanced on the field toward the opponent's side. If you advanced enough, you won the skirmish. You would do this because there was a payout for winning, a generated effect."

"The main advancement was tied to dealing combat damage. We wanted the skirmish "sub-game" to tie directly into the main game, and combat seemed the perfect flavor match. You were fighting a war, so clearly you wanted to deal damage to the opponent. The trigger only cared that you dealt some combat damage, so there was no difference between one creature dealing damage and many dealing damage. (There was one playtest that cared about batches of damage, so first strikers dealing combat damage actually got to advance the skirmish an additional time. This was not very intuitive and made first strikers a bit too strong, so we changed it for the next playtest."

"The other most commonly used advancement condition was the casting of a card with skirmish. This was important because the first skirmish card you played started the skirmish sub-game, but we wanted later cards to be relevant to encourage you to want to play a bunch of skirmish cards in your deck. (One of the problems we had was this made skirmish a little more linear than we'd intended.) We also went back and forth on whether you advanced one for the playing of the first skirmish card. This helped offset wanting to play the card when the opponent had a chance to earn a free effect."

"Most of the time we had a third advancement condition. We tried damaging players with spells, but that rewarded red too much. We tried playing Eternals/Zombies, but that also only rewarded certain colors. We tried playing multiple spells in a turn, but that didn't thematically feel right. The one that felt best was advancing when you caused an opponent's creature to die, but this complicated processing combat damage. I just want to note that we spent months on skirmish and experimented with many variables."

"The other big thing that changed a lot was the output of the winning the skirmish. Part of the time we had either player earn the effect if they won, but also tried a version where only the person who generated the skirmish token got an effect. In that version, the opponent wanted to win to stop them from getting it. What the effect was for winning and how big it was shifted over time as we tried to balance them. We also experimented with a version where there were small rewards along the way and a bigger reward for winning the skirmish."

If this is what a Battle is I don't like it since I'm tired of these gimmicks happening outside of a game such as Dungeons.

Yeah, Iâm in multimediaâs boat. âWe wanted to simulate a battleâ in... the... simulated battle between two planeswalker wizards. Ugh. It would be more tolerable if they went an enchantment route, that modified the battlefield or something. But even with that, weâre running the risk of (again) only having one or maybe two that actually get used. As a guess: the blue one would count spells cast and let you draw extra cards, which ends up being super strong and utilized in any decks that have blue... while greenâs will replace creatures you lose with sapporlings, which will only be used in limited BG sacrifice decks, and redâs will only be used in limited goblin decks because they have to dial it back during testing because itâs concepts are way too effective otherwise. Blackâs would have something like constant -1/-1 counter proliferation which would be incredible in limited instances, and then whiteâs would be hilariously over or underpowered... +1/+1 counters on your creatures when you gain life or âfetch a land for every 10 damage youâve taken this turnâ. So, six months after the set comes out, no one will even remember what the battlefields were except for the one (probably blue) that is literally in every commander deck that shares its color. Sort of disheartening.

I have no clue as to what to expect from the design team. All I know is that this better not turn into another âcompanionâ disaster. Bad enough a format like modern got ruined by WAR, MH1 and MH2 by effectively creating a pseudo-rotation issue with a lack of testing and pushing the power levels of cards.