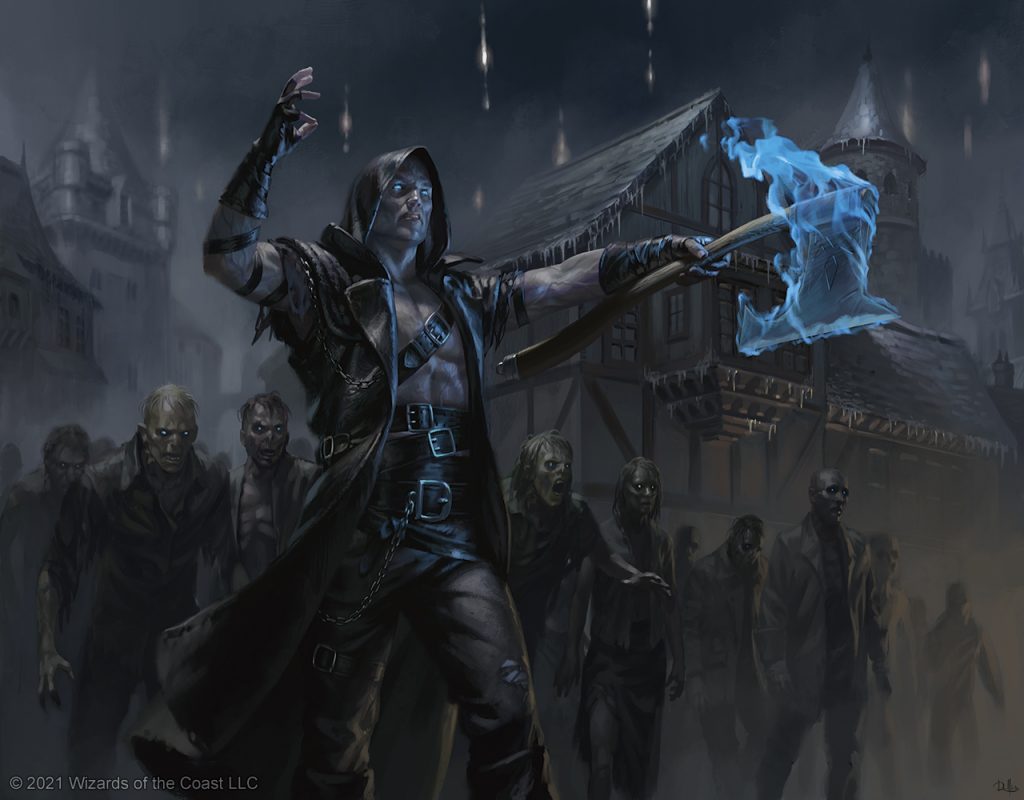 This deck is an alternate version of WILLYâS ZOMBIE COMBO FACTORY [cEDH Primer]. For this build Iâve retained most of the combos and overall competitiveness of the original, while increasing the number of Zombies and Zombie token generators for Willy Wonka to utilize. Now the deck runs more like a traditional Zombie token swarm deck, but is still well-equipped to win via infinite combos. This version is more resilient against aggro as compared to the original low-creature build.

âThere's no earthly way of knowing

Which direction we are going.

There's no knowing where we're rowing

Or which way the river's flowing.

Is a hurricane a blowing?

Not a speck of light is showing

So the danger must be growing.

Are the fires of hell a glowing?

Is the grisly reaper mowing?

Yes! The danger must be growing

For the rowers keep on rowing.

And they're certainly not showing

Any signs that they are slowing!

Iâm running numerous combo lines which are labeled in the deck-list itself, including the following:

If Station and Liliana on the battlefield, I sac Ghast with Station to deal 1 damage to an opponent and generate a Treasure token. Then I use Lilianaâs -4 ability to cast Ghast from my graveyard (spending the Treasure token), untapping Station, then repeatedly sacâing and casting Ghast, generating infinite Enter-the-Battlefield and Leave-the-Battlefield (ETB/LTB) triggers and damage.

With Rooftop Storm, Liliana, Ghast, and a sac outlet in play, I can generate infinite ETB/LTB triggers and also infinite mana via Treasure tokens.

This is Willyâs signature combo. With Willy and Altar in play, each time I sac Crawler to Altar I also generate 1 mana and a Zombie token, so I can repeatedly cast Crawler infinite times and generate infinite ETB/LTB triggers and Zombie tokens with decay. I can then sac tokens to Altar to generate as much mana as necessary.

With Altar, Storm, and another Zombie on the battlefield, I can repeatedly sac Crawler with Altar and recast Crawler for free, generating infinite ETB/LTB triggers and infinite mana.

With Necroduality and Altar on the battlefield, I can cast Crawler and generate a token copy of Crawler. Then I can repeatedly sac the nontoken Crawler and recast it for free, generating infinite token copies of Crawler and infinite mana. Similarly, with Colossus, Altar, and Crawler I can generate infinite Zombie tokens and mana.

I sac Titan and 1 Zombie token with Altar to produce , which I then spend on Deathmantle to return Titan to play with 2 more Zombie tokens, and so on, generating infinite ETB/LTB triggers and Zombie tokens.

With Storm on the battlefield, I can repeatedly cast Acererak for 0 mana, venture into the Lost Mine of Phandelver infinite times, and drain each opponent with Dark Pool until each has 0 life. Admittedly, Acererak is pretty useless outside of this combo, so I donât play him unless I intend to win.

This deck is optimized to completely self-mill itself with Pact (if I name a card not in the deck), enabling easy wins with Oracle.

I cut Demonic Consultation and Laboratory Maniac, which are often dead cards in my hand. Consultation is less useful than Tainted Pact outside of the Oracle combo, because I can accidentally exile my entire library if I name a card within the first 6 cards exiled with Consultation.

Altar of Dementia can be used in place of other sac outlets to mill cards from my own library, or even target an opponent for elimination with a Gravecrawler or Shambling Ghast/Liliana, Untouched By Death sac loop.

With Willy and Poppet Factory in play, decayed no longer matters, and any Zombie token I sac comes back with an additional Zombie token, so I can generate infinite tokens.

With Reservoir, Citadel, and Top in play, I can repeatedly draw a card with Top, using Topâs ability to place it on the top of my library, allowing me to cast Top with Citadel, draw a card, and so on, until I generate enough life with Reservoir to deal 50 damage to each opponent.

Aetherflux Reservoir can also be used in conjunction with the Phyrexian Altar/Gravecrawler or Shambling Ghast/Liliana, Untouched By Death sac loops to generate infinite life and eliminate each opponent with Resevoir.

The most basic way to generate tokens is with Wilhelt, the Rotcleaver + Gravecrawler + Sac Outlet.

I can also generate tokens with the ETB triggers of Diregraf Colossus or Necroduality + Gravecrawler + Sac Outlet.

I can go wide with Zombie tokens and penetrate the opponentsâ defenses with Gleaming Overseer or Wonder.

If I have enough tokens on the battlefield, Gempalm Polluter can eliminate an opponent without the need for combat.

The following are sacrifice outlets to achieve combo loops with Gravecrawler or Shambling Ghast + Liliana, Untouched By Death:

Once a loop is created, the following ETB/LTB triggers can be abused:

I chose Fierce Guardianship and Pact of Negation to protect my combo pieces even if I am tapped out, which an opponent usually doesnât expect.

Iâm running relatively few blue cards, so Force of Negation or Force of Will are not ideal for this build.

Willy himself is an excellent source of card draw, especially with a steady supply of Zombie tokens or Gravecrawler.

This deck is optimized for Ad Nauseam and Bolas's Citadel with a lean average CMC of 2.47.

Gempalm Polluter cycles while dealing damage, which is useful even if a player isnât eliminated in the process.

Nihil Spellbomb is primarily in the deck for graveyard hate, but it can also serve to draw a card.

Graveborn Muse, Necropotence, and Undead Augur are life-intensive but allow me to draw obscene amounts of cards, especially with Reliquary Tower.

I can abuse Skullclamp by repeatedly equipping it to Gravecrawler, killing it in the process, and as long as I have another Zombie in play, I can repeatedly cast/sac Crawler, allowing me to draw 2 cards for every spent.

Sensei's Divining Top is an excellent way to filter through the top 3 cards of my library and ensure optimal plays.

Demonic Tutor, Diabolic Intent, and Sidisi, Undead Vizier tutor for a card immediately. I have to wait until my next turn for Imperial Seal, Mystical Tutor, and Vampiric Tutor.

Entomb and Unmarked Grave are primarily for digging for Gravecrawler, but other possibilities include Dread Return, Wonder, or a creature to Reanimate.

Tainted Pact is a pseudo-tutor which not only combos with Thassa's Oracle, but is extremely flexible. I can draw as deep as I want into my library and choose a critical combo piece.

Death Baron bestows my horde with deathtouch, turning every Zombie into a threat. Suddenly those little Zombies with decayed are a lot scarier!

Undead Warchief provides a large +2/+1 boost while reducing the cost of other Zombies, including Willy himself.

Iâm on the fence with Headless Rider. It may be more efficient than Necroduality at generating tokens, but this requires further testing.

I considered each of the cards shown on the Maybeboard, but ultimately I cut them to either increase consistency, make room for more important cards, or reduce CMC.