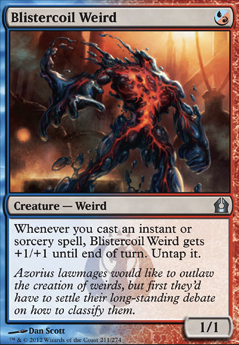 Some decks revel in the complexity of their game plan, having a wide array of answers and complex interactions, but today we're all gathered here to attain a simple goal: Get Blistercoil Weird to swing for lethal through the power of cantrips.

This deck is the pinnacle of glass cannons, being able to win as early as turn 2 using a single land and the combined efforts of Blistercoil Weird and Paradise Mantle . Usually, 19 cantrips would be required for a 20-power attack, but thanks to Viridescent Wisps and Defiant Strike , this number can be as low as 11 (although that is very unlikely).

To avoid drawing chain-breaking cards as much as possible, we have a few cantrips with card selection in Opt , Serum Visions and Sleight of Hand , as well as the new-to-Modern Abundant Harvest which avoids lands altogether. We also have a mini- Tormenting Voice in Magmatic Insight and the wonderful Slip Through Space to ensure all our efforts aren't thwarted by a blocking creature.

Despite the name of the deck, this deck doesn't have any actual Storm spells, but I could see Grapeshot or Chatterstorm working as a transformational plan or hidden tech (haven't tested that, however).

I will also point out in an effort to keep this deck budget-friendly, fetchlands have been excluded. They would however very clearly benefit this deck, so if you have some lying around or have bought into them now that they got reprinted in Modern Horizons 2, I recommend you include them (mostly for deck-thinning purposes).

Turns out, I wasn't being as innovative as I thought, although I did have a sneaking suspicion somebody had figured this out way before me. In my defence, I made this deck in 2018 and only decided to upload it when Modern Horizons 2 came around to add a new piece.

I decided to follow the steps of My Modern Storm and Blistercoil Weirding and reduce the amount of lands, in my case by cutting 4 Islands. I added two copies of Peek and two copies of Assault Strobe.