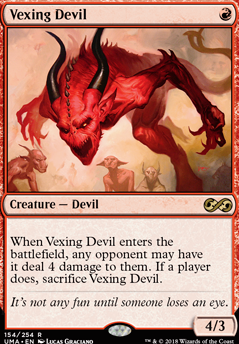 The idea is that everyone's life total is measured in edible candies. If a source would deal damage to you or cause you to lose life, the controller of that source also takes that many candies from your "These candies represent my life total" pile and exiles them to the "I won these candies which can not be interacted with" pile!

[UPDATE] - Causing yourself to lose life results in that candy being placed in the "Divided amongst all players at end of game pile", where at the end of the game, self-lost candies are divided one at a time starting with the last remaining player in the game at the time of the game ending and going clockwise.

[UPDATE II] - There are only 20 candies per player, regardless of life total. If your life total increases, you don't gain candies, but you can still lose them! Be careful!

[UPDATE III] - Causing a player to simply "lose the game" nets you all their life total candies! If you cause yourself to lose the game, your candies go to the share pile!

The winner isn't the person who loses last... person with the most candy at the end of the game wins!

In a 5-player game, that means there are 100 M&Ms, or Skittles, or marshmallows, or any combination of delicious cavity/diabetes inducing confections out there. Make sure you win them all!

Basically, this deck's idea is to Impact Tremors and Purph your way to massive success - dealing damage to each opponent to snag their candies. A single creature with a single Impact Tremors in a 5-player game means four candies to your pile!

There are a number of cards that involve a choice, and this is simply for trick-or-treat flavour. This deck doesn't necessarily want to attack, it's all about the scary presence!