Lost In The Blind Eternities
by skoobysnackz 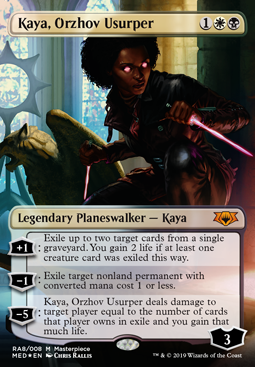 Puff the Magic Dragon
by skoobysnackz This is my less budget Muldrotha, the Gravetide deck that started out as Budget Muldrotha. It keeps the typical grindiness and overwhelming value that the budget version had, but is more focused on finding a combo to end the game rather than just trying to out value everyone.

The first "combo" really represents the Muldrotha gameplan and its pretty simple: If you play Primal Surge with Jace, Wielder of Mysteries in your deck, you win!

The next combo requires Ashnod's Altar and Nim Deathmantle and any creature that creates two tokens in response to either entering the battlefield or being sacrificed. I play Grave Titan , Wurmcoil Engine , and Deranged Hermit . Using River Kelpie will also work to draw as many cards as you need. The combo creates infinite creature tokens, and by default infinite mana with Ashnod's Altar , by sacrificing the main creature and one of the tokens to get 4 mana, then pay 4 to Nim Deathmantle to get the creature back with a net gain of 1 creature per loop.

The third combo is pretty easy to assemble, and pretty well known to commander players, it consists of Mikaeus, the Unhallowed , Walking Ballista (or Triskelion ), and a free sacrifice outlet like Ashnod's Altar or Viscera Seer . Mikaeus will make the ballista a base 1/1 letting you ping off his counters at people's faces. Then sac the ballista and it comes back with a counter from undying. Repeat this until all opponents are dead.

The fourth combo is another pretty simple and straight forward combo that really fits in with Muldrotha's flavor. If you can get Lord of Extinction to have a higher power than all life totals, you can just fling him at all your opponents simultaneously with Jarad, Golgari Lich Lord .

Finally, the last combo that I'd like to mention is Underrealm Lich with The Gitrog Monster . These two cards allow you to pick the best of the top 3 cards in your library repeatedly until there are no lands in one of the piles. While not necessary to gain a huge card advantage, anything that sacrifices lands like Sylvan Safekeeper to get Gitrog draw triggers helps out a lot to make this instant speed. While this doesn't really win the game, it helps find one of the other combos that will.

Since most of these combos rely primarily on creatures, I have a few tutors that are permanent based which makes them repeatable, most notably Fauna Shaman , Defense of the Heart and its little brother Pattern of Rebirth . However, the combos can often be put together just by dredging or somehow milling myself and then reanimating the combo with Muldrotha.

Edit: Since the spoiling of Prime Speaker Vannifar I've been trying to figure out a good way to fit her in here, and I think I've found it. With Prime Speaker Vannifar , Intruder Alarm and any 1 other creature with cmc below 6, I can win the game by tutoring out the Mikaeus, the Unhallowed combo with Triskelion instead of Walking Ballista . Basically the Vannifar intruder combo lets me sac a creature, find one with exactly 1 greater cmc, put it onto the battlefield, then untap and repeat as many times as I can find a creature in my deck. The idea is to find a creature that has persist or creates tokens before finding Mikaeus, the Unhallowed . Then sacrifice the token and repeat the process, this time finding Triskelion (I can't get Walking Ballista this way because X=0 anywhere but the stack). From here, Prime Speaker Vannifar can be used as the sac outlet instead of Viscera Seer or Ashnod's Altar because Intruder Alarm will untap her when Triskelion re-enters the battlefield even though there are no creatures with cmc 7 in the deck. But Viscera Seer can still be found if needed by sacrificing a token to Prime Speaker Vannifar .

Note: Click the "Muldrotha's Maggot Brain" tab to pause the music. Also, it doesn't seem to work all the time so click on that tab if you want to listen to the cool music.