People keep telling me how weak Tetsuko is.

Then I kill them.

Then they sulk (and/or cry). 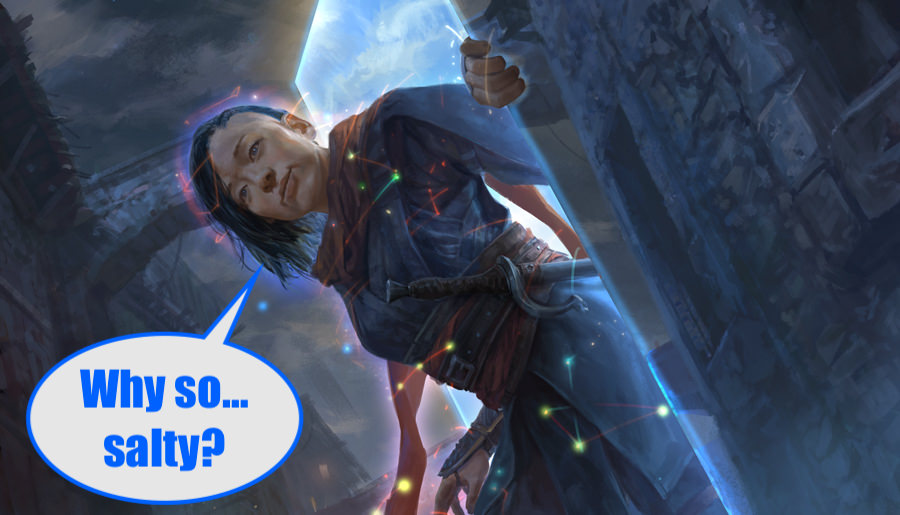 Welcome to my most oppressive deck!

Story time! When I first learned Magic, back in 2003, I only had one friend to play against, who had more money and experience than me.

Using a vicious mono-blue control deck, he brutally defeated me every day...for four years. When I finally beat him, he literally burned his cards and quit the game rather than play against me again. I was left with nothing, except a visceral hatred for blue mages.

When playing this deck, I want to share this experience with my opponents.

The moral of this story?

...Okay, I'll admit it, it turns out that I'm a bit of a control freak. You either die a hero, or live to see yourself become the villain, as they say.

This is a mono-blue control/aggro list. It's optimized for 1v1 play (where your counterspells do the most work), although it still definitely works in multiplayer. The deck is built around combat damage triggers, particularly ones that draw cards or disrupt opponents. The goal is to slowly whittle down our opponents' hand and resources, counter whatever wincons they try play, and beat them to death with our army of tiny blue beaters.

The goal is to control at least a few creatures that draw cards upon connecting with opponents, so that you draw 4+ cards per turn, and use this card draw to dig for answers and counterspells.

In order to win in a reasonable amount of time, we have several methods to boost creatures' power while still leaving them unblockable (Umezawa's Jitte, Runechanter's Pike, etc), use infect (Inkmoth Nexus), use Quietus Spike, or create our own pseudo-Annihilator (Cephalid Constable). When playing this deck according to the 1v1 banlist, the deck adds a few other "fast" win-cons as well. Don't forget that 6/1 creatures are still unblockable due to Tetsuko's ability, but 6/2s are not.

Overall, the cards in this deck can be sorted into several categories:

This deck gets most of its card advantage from having its creatures connect with opponents, often with the help of Tetsuko's ability. We are running 9 creatures that automatically draw a card when they hit an opponent, in addition to 5 non-creature spells that have similar effects (Bident of Thassa, Coastal Piracy, Smuggler's Copter, Mask of Memory, and Tezzeret the Seeker tutoring Bident) - in effect, we are running 14 copies of Phyrexian Arena in the deck. As long as we control 1 of these creatures, we rarely run out of cards to keep up with our opponents. On a good hand, such as Master of Waves accompanied by Tetsuko and Bident of Thassa, we can easily be drawing 7+ cards per turn.

Other non-draw combat triggers are covered in the sections below, but they generally have some form of disruptive effect to our opponents' plans.

Preemptive disruption can be anything from stax pieces (such as Damping Sphere or Arcane Laboratory) to silver-bullet answers (Phyrexian Revoker), to hand disruption (Riptide Pilferer or Vendilion Clique) to library-attacking spells (Riptide Thief or Raven Guild Master). I will go into further detail later in this primer, but your suite of preemptive disruption can be tailored to your meta and opponents if you know their deck well. Our final form of preemptive disruption is to attack landbases, through cards like Strip Mine, Wasteland, Back to Basics, or often a Stifle pointed at an early fetch land (or under rare circumstances, Commandeering an early mana rock).

Long story short, we have many ways to neuter opponents' threats before they even have the chance to try and cast them.

This deck runs 11 pure counterspells, of which 6 are truly unconditional. It also runs Stifle and Nimble Obstructionist as pseudo-counterspells to answer battlefield-based effects such as Aetherflux Reservoir or several infinite loops, as well as interfering with fetch lands. Beyond these counterspells, we also have access to Commandeer, which can be amazing 0-mana disruption against non-creature win-cons, such as powerful planeswalkers or enchantments.

Most of our battlefield disruption is based on bounce effects - making our opponent cast each permanent 5 times forces them to waste mana, and gives us many more opportunities to counter them. Cephalid Constable, Mistblade Shinobi, Sigil of Sleep, and Arm with AEther can bounce opposing threats upon combat.

Meanwhile, we have mass bounce effects from Cyclonic Rift, Thing in the Ice Â , Crush of Tentacles, and Wash Out, in addition to repeatable targeted bounce from Capsize and "bounce" effects from AEtherspouts. Overall, bounce effects are the bread and butter of our temporary removal. When playing in 1v1, I would swap River's Rebuke over Crush of Tentacles, by the way.

Finally, Curse of the Swine, Reality Shift, Rapid Hybridization, and Pongify are valuable because they are some of the very little perma-removal that blue has access to. I would generally save these for when you are desperate or you think that your opponent has no other threats, since they're too important to waste on something smaller.

The "standard" win-con for this deck is slow attrition with 3 or 4 unblockable creatures, dealing 5 or so damage per turn. (Normally I never have to play this out to the end - people tend to concede when you counter every spell they try to cast.) But there are a number of other win-cons this deck can strive for:

And, of course, I win more than half my games from concession at this point. Once this deck gets rolling, it can be more oppressive than you can possibly believe.

Overall, the plan for this deck is to stall, then win in the late-game once your opponents' threats are neutralized, countered, or disabled. This is in fact harder than it sounds, because this deck has very little at the high end of its curve - you will almost always be winning with 2-4 drops. However, you'll find that you can frequently answer everything your opponents throw at you, and simply win once they've started top-decking.

Against an aggro deck, Propaganda, Mistblade Shinobi, Sigil of Sleep, and Cephalid Constable are your best options, depending on whether the aggro deck goes wide or tall. Continually bouncing an opponent's creatures before they can hit you (or use tap abilities) is a completely viable way to stall games, especially against a commander like Krenko. Since aggro decks generally run out of steam in the late-game, your goal is to shut down their early pushes (with cheap removal/counters, Curse of the Swine, etc), and overpower them with card advantage and answers in the late game. It's not uncommon to fall below 15 life before stabilizing in this matchup.

Against combo decks, your best answers are generally Arcane Laboratory, Damping Sphere, and a good knowledge of what they plan to do. As everyone knows, combo decks are vulnerable to counterspells, so you have a natural advantage in this matchup. As far as "silver bullets" go, you'll have to decide for your own meta, but I included more information in the "Sideboarding" tab. Don't forget that, if Arcane Laboratory is out, you only need 1 counterspell per opponent to lock them out of casting spells entirely.

Against other control decks, the advice isn't as obvious. They generally play more colors than us, and have more options. I would prioritize countering their board wipes and card draw - since our creatures can draw us several cards per turn consistently, we'll usually outvalue them eventually as long as we protect our creatures on the ground. Reserve your counterspells for things that REALLY need to be answered, and try to play cautiously. Longer games are your friends here.

When playing against multicolored decks, particularly ones with "greedy" manabases, one of your most important cards is Back to Basics. Seriously, the card frequently wins games single-handed against 3+ colored decks. I would personally suggest casting it around T5-6 when they've emptied their hand of lands and tapped out for something, especially if you countered this thing ;)

Against commander-reliant decks, having either Declaration of Naught or a counterspell on Isochron Scepter is vitally important, and can lock some glass-cannon decks out of the game entirely.

For the fastest cEDH metas, I would play cards like Spell Pierce and Flusterstorm over some of the more mana-intensive counterspells (such as Cryptic Command or Forbid). A counterspell doesn't do anything if you don't have the mana to cast it in early turns.

This iteration of the deck doesn't attack opponents' mana as much as some of the earlier drafts: I used to play a solid suite of mana denial (Winter Orb, Static Orb, Mana Vortex, Land Equilibrium, etc) and ways to get around it (As Foretold and a few others). If your meta relies more heavily on mana dorks or artifact ramp, you can include Cursed Totem or Null Rod respectively, especially since we are minimally affected by either.

One hard choice when building this deck is choosing which "silver bullet" stax pieces to use. My meta is pretty storm-heavy, so I chose to play the hardest available answers to that strategy (Arcane Laboratory and Damping Sphere), but your choices may vary. If you play against reanimator frequently, Grafdigger's Cage might be your best bet; if you play against decks with many ETB effects, Torpor Orb is your friend (especially since we frequently bounce opponents' creatures). If you play against superfriends, Sorcerous Spyglass/Pithing Needle can take their place alongside Phyrexian Revoker. Et cetera - half of the battle in a control deck is knowing exactly what you need to do to shut your opponents down preemptively.

I would love any thoughts or suggestions you have on this deck! Thanks for reading :)
...if you savor the salty tears of your opponents like exquisite wine!

This deck is being rebuilt and updated.

HOWEVER. Someone stole my Force of Will, and I don't have the budget to re-buy it right now. So we may have to use Foil in that slot instead for a while.