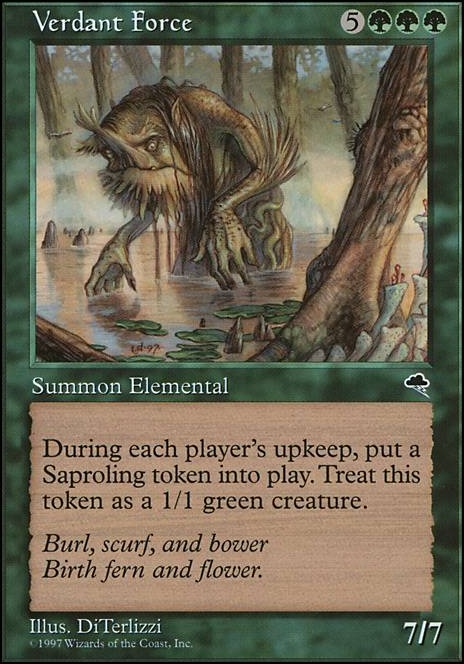 This deck is a modified version of the legendary 'Secret Force' by Jamie Wakefield. This isn't (by no means) meant to be a better reincarnation of it. If anything, it is my interpretation of it.

Before I start discussing the deck, a quick note: if you are familiar with the deck you may have noticed that there are no Gaea's Cradles (the original build ran 3x) and no Wastelands. While the inclusion of Wasteland could be a plus, the lack of Gaea's Cradle limits the deck's potential at times. The point is: I don't have Gaea's Cradle and don't like to proxy cards (it forces me to build around constraints); beacuse of that I had to ensure I had roughly a land to drop each turn and Yavimaya Elder makes this more likely (besides being interactive card advantage, the kind Jamie favors... and also being damn cool!). Also: I lack a fourth Natural Order: although more situational, Defense of the Heart does the trick just fine (and when it does, it overperforms).

This deck embodies Green's Endurance. And, man, it endures. The original concept was specifically designed to stop Sligh. Between Wall of Roots, Spike Feeder and his cousin Spike Weaver, it managed to do that egregiously. It had very poor matchups, also. Tradewind Rider used to be a nemesis for this deck. For added flexibility and resiliency, I figured two Living Wish wouldn't hurt. They can't solve all of your problems, but: hey, it's still a smashing deck to play with! ...and a very clever too.

As Oscar Tan wrote somewhere, this is a control deck. Yes, it has Verdant Force ("Best Fatty Ever Printed"...ahh, good times...) and it's really cool when it hits the battlefield. But the deck aim is not to drop it as soon as turn three, even if it often can. It plays differently:

The whole philosophy of this deck is: 'you don't have to deal with their threats if they have to deal with yours'. It might even have been Jamie Wakefield to have said that, I'm just too lazy to doublecheck. Because most of your answers are played preemptively and as early as possible, the opponent can't help but trying to find a way to get them out of the way, while you keep finding what you need thanks to the deck's soft toolbox component provided by Natural Order (and Living Wish), the original Tinker card. Between actual copies of the cards you need and virtual ones provided by Natural Order, you can keep troubling your opponent while sneaking a few points of damage before that moment. Yes, the one you were waiting for: the one when Verdant Forces start coming out of nowhere and your opponent is depleted or is at a point of the game where he or she just can't do anything about it.

This deck runs 23 lands, one more than Jamie's signature one. They are enough, considering you have 8 Llanowar Elves, 4 Wall of Roots and means to cast creature spells for the inexpensive cost of . Even so, if there is one thing you've got to get used with these kind of Tinker decks is that bad hands happen. You may draw 4 Forests and 3 high CMC creatures. If in your opening there isn't a mana dork you may want to consider a mulligan.

Don't underestimate Overrun. It seems that kind of card a kid would play to impress his or her friends: it's not. Overrun can be a game changer. I had a copy of Genesis in place of a third Overrun, as I thought it would help the deck reboot once it hit topdeck (which happens, with all the Fog provided by Spike Weaver). However, considering that - even without a Verdant Force - the deck can easily have 4 creatures on the battlefield, Overrun can close a game at any moment.

Since I play this deck with friends who own decks from a slightly different period, my metagame doesn't match the one Jamie Wakefield had to deal with when he built this deck and my fifteens may be a litte messed up for this reason. Besides, I believe Living Wish is a nice addition to this deck and it definitely changes the way you build your sideboard.

As for how to play this deck, keep in mind this: while a 10 land stompy deck emphasize tactics over strategy, sacrifices Card Advantage for Tempo, and throws expendable creatures at the opponent, you gotta be more thrifty with a Secret Force. Your resources are valuable and you can't afford to waste them: you don't have a stream of 1CMC beaters waiting at your topdeck for you to pick up. You wanna plan ahead and choose very fast if you are the beatdown deck or the control deck (Bless you, Mike Flores!). Stall you opponent up to a point where his threats are no longer relevant, or assault early on with your utility creatures... and maybe, yes: a Verdant Force on 3rd turn.

A trademark of this deck is that it relies very much on creatures to do everything: if there is a creature card that can perform a utility task while costing more than the sorcery or instant variant, this deck wants the creature over the other options. Always. It wants interactive card advantage and wants to beat you in the process.

I've finally put my hands on a fourth copy of Natural Order ...and a copy of Defense of the Heart! Out the Living Wishes, in the new acquisitions!