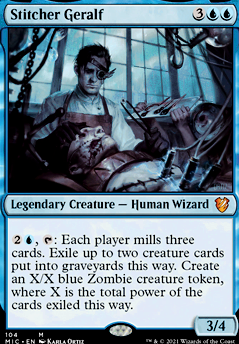 The moon shone brightly over the empty skies of the Moorland, casting a calming glow through the lab's windows. Geralf set down his forceps and pulled a hand from its grimy glove to wipe his brow. He took a moment to admire his latest creation.

The skaab that lay on the table was an impressive amalgamation of pieces, freshly (or, at least what passed for fresh in the field of stitching) dredged from the lake not too far away. Of course, it was becoming increasingly difficult to procure human remains in light of the recent developments on Innistrad; his homunculi had fetched all manner of otherworldly bits. Geralf was loathe to stitch the limbs of eldritch horrors - the sinew and muscle of tentacles did not play well with humanoid physiology - but he had been feeling particularly inspired that day. The pile of flesh on the table sported two heads - one of a human, and one of a wolfir. The torso sprouted a multitude of limbs, skin grafts, and rusted armor, all sewn into each other in what would be considered a horrifying mess to anyone other than an accomplished skaaberen.

Ludevic's suggestions worked to perfection! I cannot wait for the next lightning storm, thought Geralf. He pulled off his gloves and lifted his eye loupe. "But until then..." he said aloud, as he glanced across his laboratory at the large tackle box perched on a stool near the door. "I suppose I've earned a day off."

Geralf walked calmly out of his home, passing by a pair of his homunculi as he headed for the forest. One hand held the tackle box, the other, a magnificent fishing pole left for him by his late father. "Oglor! Igretch!" Geralf called to his servants. The diminutive assistants peered up inquisitively with their comically large, singlar eyes. "I leave to relax, and find inspiration in the watery deep!"

The two homunculi looked at each other, then back up at Geralf.

"No! Oglor, you stay." Geralf gritted his teeth in frustration. "Igretch, you stay too. Master will be back in a day."

"Igretch stay!" The shorter of the two homunculi snapped off a goofy-looking salute.

"Good," Geralf said finally. He hastened his pace for the woods. There was a very particular fishing hole he was heading for, one that, thanks to its location in the middle of the Moorland (read: nowhere), was nearly untouched by meddlesome humans. Not even his obnoxious sister knew of it. Geralf's mood picked up as he imagined himself at his destination, and he hummed a tune to himself as he walked.

A short while later, Geralf arrived at his beloved fishing spot. But something was different this time. Geralf kept a curious eye on the water as he set down his tackle box and fishing chair. The water seemed to swirl with magical energy, almost as though it were a portal to a faraway land. Intrigued, Geralf moved to the edge of the water and tentatively dipped a finger into it. It felt like ordinary pond water at first, but soon a tingling sensation gripped at the skaaberen's hand. He retracted his finger and stared at it, perplexed. It didn't hurt, but it was certainly out of the ordinary.

Geralf shrugged and stepped back, settling into his chair. He popped open his tackle box and plucked an Eldrazi tentacle, about the size of a human index finger, from one of the bait trays and stuck it on his hook. I know not what has happened to my beloved fishing hole..., Geralf thought. He reached back with his fishing rod and cast his line into the aetherized water.

...But if it is the work of a sea creature, then its limbs shall soon adorn the body of Geralf Cecani's finest new creation!

Things the Deck Does:

Things the Deck Does Not Do:

Thassa, God of the Sea Monsters

All you can eat seafood