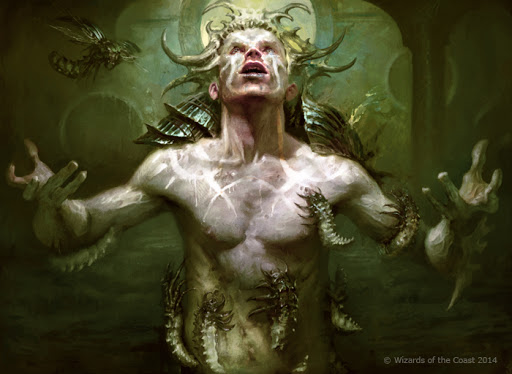 This modern-layout, creature-heavy, casual Karador build is centered around using Primal Surge to its full potential as a win condition and thus the deck does not contain any other instants or sorceries. Consequently, resolving the Surge will put the entire library onto the battlefield and that almost certainly results in a victorious outcome. However, I rarely cast the game-winning sorcery spell as I prefer to exclusively hardcast it to end long-running games in which all players got to play their game of Elder Dragon Highlander. I've purposefully not made any card choices dedicated to making it easier to play the Surge. It's powerful enough as it is, and sometimes a welcome end to a dragged out game. At turn 10, I would much rather lose to a powerful combo than to an opponent that draws their deck and still needs several turns, often taking ages, to win the game. Including a single game-winning card in your deck can be quite controversial and can lead to negative reactions, so I have always tried to use it with caution.

That being said, running Primal Surge this way puts restraints on card choices as only permanents are included in this list. I've further limited myself to using exclusively cards with a modern layout, so that means no access to cards like Academy Rector, Wood Elemental etc. Some reprints can be rather expensive (Hermit Druid, Survival of the Fittest) and I tend to stick to a budget of max $50 per card. I have obtained my copy of Karador, Ghost Chieftain in 2013 and this list has been evolving ever since.

The deck only contains 15 noncreature spells which is the exact size of a sideboard. Swapping all of them for creatures lets us use Umori, the Collector as a companion for Karador. I'm currently playing around with the idea to run the deck as a collector whenever I start an EDH game and them SB a bunch of creatures out for the Surge and other non-creature permanents.

To dredge or not to dredge

Recently I came across a Karador cEDH tutorial on YouTube by Laboratory Maniacs where /u/djmoneghan was quoted (jokingly) describing Karador, Ghost Chieftain as "the worst card in the deck". Even though my list differs a lot from his, this statement holds true for my deck, kind of. In any case, it does so more now than it ever did before. Naturally, der GeisterhÃ¤uptling's high CMC and ability combined require some preparation before value can be generated. As I've played the deck throughout the years, I've diverted from a graveyard centered strategy to a more conservative style of play. This means that it generally takes longer for me to get to the point of actually casting the Antlered Reanimator and subsequently get to work reanimating creatures. It is my experience that relying heavily on graveyard filling strategies is extremely powerful but proportionally susceptible to GY hate. Instead of running Leyline of Sanctity and Shalai, Voice of Plenty (which only prevents targeted GY Hate) to deal with the existence of (mainly) Bojuka Bog, I've decided to focus less on graveyard filling and instead lean toward a more grindy, reactive style of play. The graveyard filling cards that are included in this list are ones that have the potential to bin massive amounts of cards (Greater Good, Altar of Dementia, Death's Oasis) and let you go off on the spot or are just too good to leave out (Stitcher's Supplier, Golgari Grave-Troll). This way, I keep my graveyard at a non-threatening, manageable size during the majority of the game. It prevents a Crypt or Relic from having the wrecking effect of a sledgehammer or the potential to keep me in a stalemate (e.g. Having a hand full of dredge/graveyard cards while staring down at a Crypt on the other side of the table.

The general game plan for the deck is to start with putting out mana dorks or ramp creatures and keep flooding the board with ETB creatures interacting with the board, assisted by the non-creature spells that function to generate card advantage. Karador is incredibly resilient by itself but for it to really shine you need to fill up the graveyard. As I've previously stated, I chose to divert from that as a dedicated strategy. Therefore, I've found that I needed to add additional recursion spells to interact with my graveyard before I get to the late game where Capitano Fantasma can shine. Overall, Karador, Ghost Chieftain has become less and less a focus of the deck and more of a extra layer of resilience in an already fairly resilient list that can operate and win independent of its general.

Graveyard-filling cards are limited to Golgari Grave-Troll, Altar of Dementia, Death's Oasis, Greater Good and Stitcher's Supplier as I prefer to play the game slow and not risk using the graveyard too much. Instead, I choose to play cards that fill it up fast when going off. The graveyard is also filled by cards like Pernicious Deed and Oblivion Stone. Fauna Shaman can do some work but mostly I count for the graveyard to be naturally filled by the many creatures the deck already runs. If needed, facilitated by one of many sac outlets.
Kozilek, Butcher of Truth is included as a way to protect myself against mill strategies and protect me from decking myself.

I hate when my guys get exiled. That's why I love to have a sacrifice outlet available. This deck runs seven in total, of which five are free to be activated at instant speed (Viscera Seer, Vish Kal, Blood Arbiter, Greater Good, Ashnod's Altar and Altar of Dementia)

Greater Good is the all star of the deck. Combos with Sun Titan and Saffi Eriksdotter for an alternative win con. As does Altar of Dementia. Another wincon is available in the Biorhythm mana dork. The list includes many of the usual suspects from the Abzan reanimator suite like Karmic Guide, Rark, big Mike, ewit, Rallier, Sun Titan, Saffi and a plethora of creatures with various ETB abilities like acid ooze, draindragon, combotree and TheBetterBaldAngel. Amongst these, many combo's can be made to win the game. Finally, Craterhoof Behemoth has been known to pack a punch.

The deck contains a Sliver subtheme: Manaweft Sliver, Gemhide Sliver, Harmonic Sliver and Necrotic Sliver. Getting additional value from combining these is good fun and happens surprisingly often. I have yet to encounter a Sliver EDH player, but I imagine these will come in handy when I do.

No Boonweaver combo. I still have to give it a try as I have recently obtained a Pattern of Rebirth. I'm thinking it leads to linear plays. The same reason I try not to include two card combo's, although I did at some point ran both Big Mike and his persisting SinkholeTree but I can justify that by their demanding casting costs.

Cards to cut for better alternatives once I obtain them:

I'm considering including one of these 9CMC targets to pod Karador for:

Any thoughts or suggestions?

Thank you for reading

Guess who's back, back again