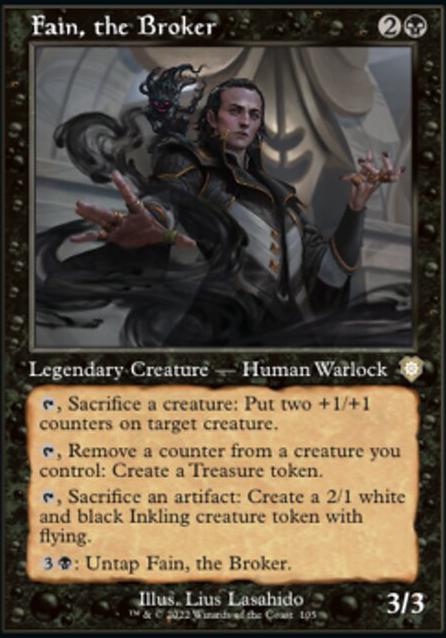 Starring Fain, aka Tom Hiddleston as Loki from the Marvel Cinematic Universal. Or, a close enough lookalike. I'm not the only one, right?

Jokes aside, Fain spoke to me the most out of the sub-commanders of the recent spoiler season. I also knew how to break his little remove-counters-for-Treasure ability right away, as Aristocrats is my favorite archetype and I've seen it in action with similar abilities to his (i.e. Marrow-Gnawer). Inspired by his ability to make Treasure and to sac artifacts to make other tokens, I also went for a heavy artifact theme as well. To reuse creatures, there's a decent amount of Reanimation as well. Its very satisfying to loop Wurmcoil Engine or Phyrexian Triniform repeatedly for value and Token-y goodness.

The gameplan is thus: sac creatures, place counters with our commander (and various other cards such as Yawgmoth, Thran Physician and Mikaeus, the Unhallowed), remove them for ramp, and sacrifice artifacts for our gain. We have a few combo win-cons, which generally involve a sacrifice outlet and go into creating infinite mana.

How to break Fain's ability: Have him, a creature with Undying (Geralf's Messenger, Butcher Ghoul, or any non-Human with Mikaeus), Thornbite Staff, and a Sacrifice outlet. Attach Thornbite to Fain. Sacrifice the Undying creature. It comes back with a +1/+1 counter. Tap Fain, remove counter, create treasure. Sacrifice Undying creature again, Thornbite untaps Fain. Repeat. Win by feeding it into Hangarback Walker for infinite Thopters upon its death, Walking Ballista for infinite pings to the face, or to pay Torment of Hailfire enough so our opponents have nothing left.

We also have Cathodion+Nim Deahtmantle+Ironworks/Ashnod's Altar. Sacrifice Cathodion, use mana to activate Deathmantle's special ability. Repeat until opponents are drained from Blood Artist, Zulaport Cutthroat, or Disciple of the Vault, or the infinite mana you require is enough to kill everyone.

Finally, there's Yawgmoth + 2 Undying Creatures for drawing our deck or infinite death triggers. Activate Yawgmoth's Pay-life-sacrifice a creature-place-counter ability and place a -1/-1 counter on one of the creatures. Undying creature comes back. Activate again, this time sacrificing the create that already had the -1/-1 counter on it and place the new counter on the Undying Creature with a +1/+1 counter on it. This makes both counters disappear. Keep doing this alternating pattern until you're satisfied.

Name of the deck has changed, Inspiration struck! Inspired by this song here-

I Refuse to Play Magic Normally

Finally, a commander for Ugin copy