A Vicious Cycle
by clancy292 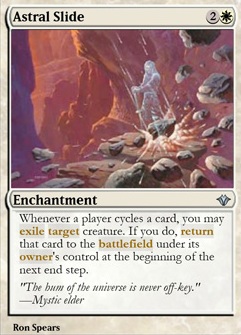 Esika, God of the Tree Â  deck that focuses on ramping to The Prismatic Bridge as fast as possible, cheating one or both of the only two creatures in our deck, and a lot of shrines/enchantments/lands with the purpose of mounting value from upkeep triggers and taking advantage of possibly getting land tutors 3 or 4 times a turn from shuffling Golos, Tireless Pilgrim back into the deck. Since we only have two creatures, we can have a lot of fun by putting either one of them back into the deck to pull back out with the Bridge.

Full description coming soon, but from the times I've gotten to play this I've had so much fun, especially if you're looking for a departure from infinite combo/"I have these two cards so I win" gameplay! If you love innovative deck-building, upkeep triggers, and VALUE, this is a sweet deck to try out. I might try and theme the deck around the show Twin Peaks, but that'll take some work.

-The idea of the deck is enchantment-based gameplay to allow for The Prismatic Bridge to pull Golos, Tireless Pilgrim and/or Sphinx of the Second Sun . Shrines get extra value from the Sphinx and Golos powers the engine. I'm not saying that Golos is a secret commander here, but I could understand if you guys might think that. Whenever you pull Golos the first time, the main choices for the land tutor are The World Tree for mana fixing, Field of the Dead to start generating tokens/blockers per our singleton mana base, or Maze's End to begin our Guildgate plan, the for-sure win condition of the deck outside of value from our token generators, Sanctum of All + Shrines. Reshape the Earth would be a great card for the deck, but I'm not that big on hitting an instant-ish win with this deck.

-The removal and interaction pieces serve double duty here: Chaos Warp / Oblation / Terminus / Hallowed Burial / Bant Charm / Hide / Seek / Reito Lantern / Noxious Revival / Submerge are geared to return Golos and/or Sphinx back to the deck so they can pull them back out and get more land fetches and protect our value pieces, as well as deal with threats on the board or in the graveyard. Pull from Eternity is in the deck for a similar effect to hopefully never be without Golos if he happens to get exiled. All in all, there are about 9 ways to get Golos back into the deck if he ends up in the graveyard, and one way to get him back from Exile.

-Our anti-aggro and stabilization effects like Ghostly Prison / Propaganda / Sphere of Safety protect us from attackers, and Authority of the Consuls / Honden of Cleansing Fire / Sanctum of Stone Fangs are useful for gaining life. In addition to these, we have several token generators that serve to create blockers in case the other outlets aren't online yet: Field of the Dead / Endless Ranks of the Dead make us zombies, Honden of Life's Web produces 1/1 Spirit tokens that are good for chumping or sacrifice fodder for Goblin Bombardment , and last but not least, Outlaws' Merriment generates 1 of 3 tokens that all have different uses for defense, or offense. Starfield of Nyx is good recursion for a third of our deck as well as turning our enchantments into creatures to attack/block. Other ways to police the board include Honden of Infinite Rage / Sanctum of Shattered Heights / Goblin Bombardment to shoot down creatures and Sanctum of Tranquil Light can tap down Commanders and/or Scary Threats.

- Wheel of Sun and Moon is a card I discovered while building this deck, and I've gotta say, it's destined to be one of my new pet cards. Enchanting yourself means any one-time-use cards get put back on the bottom to be shuffled back in if The Prismatic Bridge has no targets to pull out. It also ensures Golos sticks around as long as he isn't exiled. Goblin Bombardment is featured as a sac outlet if I need or want to do so at instant speed which can fizzle peskier effects that might exile or steal my creatures. And on the converse, Wheel of Sun and Moon is a cute way to hose graveyard, self-mill, or mill decks that can be recycled with Chaos Warp, Oblation, or effects like Starfield of Nyx and Open the Vaults . Very flexible card. I love it. Also makes room for Energy Field if I ever decide to take the deck that direction.

Leave a like if you enjoy! and check out some of my other builds!