*Note: Description is out of date, but information is still relevant; some cards choices have changed. Updated description coming soon when Strixhaven is released and card prices stabilize.* 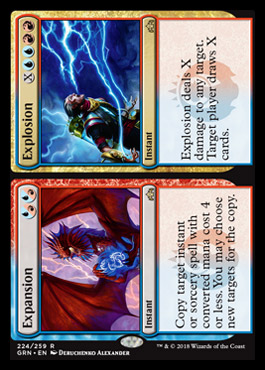 Instant Forks create so much value with tapped Kalamax. For as low as two mana I can end up resolving two copies of the instant/sorcery I copied and put infinite +1/+1 counters on Kalamax. The main goal is too get infinite +1/+1 counters on Kalamax using an instant Fork to copy itself on the stack an infinite amount of times. As long as a Fork is the first instant I cast during a turn it can be used with tapped Kalamax and another card to make an infinite copy instant loop.

The first way to do this interaction is by copying any opponent's instant or sorcery. This results in making a copy instant loop during an opponent's turn and having an infinite large Kalamax on my next turn.

The second way is I cast a sorcery, hold priority, with Kalamax tapped cast a Fork. This way can use Chandra's Ignition with an infinite power Kalamax as a win condition.

Merchant Scroll is excellent with tapped Kalamax and a Fork to setup the rest of the game as well as give Kalamax infinite +1/+1 counters. For as low as four mana this gives me three Scrolls which gives me many options of blue instants I can tutor for. Most of the time I tutor for an instant to give evasion to Kalamax such as Shadow Rift , a mass draw spell such as Pull from Tomorrow and a counterspell such as Stubborn Denial . Other options with three Scrolls are tutor for Turnabout , Muddle the Mixture and a counterspell. Muddle can transmute for Nivix Guildmage to assemble the Turnabout combo.

On my turn with an infinite power Kalamax Chandra's Ignition can be a win condition without a Fork by doing infinite damage to my opponents. Since Ignition is a sorcery then it can start the Fork combo with Kalamax where Kalamax gets infinite counters giving him infinite power.

In the combo, copies of Chandra's Ignition after resolving at the end of the combo see Kalamax with infinite power which does infinite damage to opponents. When I first cast Chandra's Ignition targeting Kalamax it doesn't matter what his power is because this just puts the spell on the stack. It's when I want to resolve Ignition that's when it matters how much power Kalamax has, but in this combo that doesn't happen right away. The three Ignitions stay on the stack all the way until Kalamax has infinite counters giving him infinite power and then they resolve last.

I first choose a target creature to put Chandra's Ignition on the stack and then when it resolves it looks at that creature's power. If that creature is still on the battlefield then Ignition does damage, but if there's no creature then no damage is done. When using these spells that are relying on Kalamax's power to do damage then I need a way to protect Kalamax before I combo because if he leaves the battlefield in response then these spells don't do damage.

Kalamax tapped + Turnabout + Nivix Guildmage + at least five lands = infinite mana by tapping and untapping all my lands and draw the rest of my deck with Guildmage to assemble a win condition.

I can do this combo at instant speed on an opponents turn since the win conditions are instants. I want to make infinite and mana because then Guildmage with it's abilities can be the enablers to draw into a win condition/copy that instant with infinite mana.

Win conditions with this combo:

This combo doesn't need Kalamax to go infinite and win. If Kalamax is involved then he gets infinite +1/+1 counters because of Guildmage infinite copying Turnabout. If not using Kalamax then the combo costs 8 mana (4 for Turnabout and 4 to copy it with Guildmage). Kalamax speeds up the process because I only need 4 mana to cast Turnabout to combo. Chandra's Ignition is a backup win condition if I can't win at instant speed with the combo because Kalamax will have infinite power. Before ending the combo I should draw Ignition with Guildmage and have it in hand just in case.

Putting infinite counters on Kalamax and not winning the game that turn puts a target on Kalamax and I most likely will become the archenemy of the game. I need to be prepared if attacking with an infinite power Kalamax. I don't have to win on the spot when I put infinite counters on Kalamax. I can instead use an infinite power Kalamax as an attacker each turn which can and most likely will kill my opponents one at a time with lethal Commander damage.

If using Kalamax as an attacker than repeatable evasion helps to do combat damage to an opponent. Kessig Wolf Run and Shadowspear equipped can give Kalamax trample. Wolf Run is the better of the two because it can be tutored for and put onto the battlefield with Crop Rotation . Shadowspear can be a source of lifelink as well as a way to remove my opponents indestructible/hexproof for the turn which can be helpful in multiplayer Commander. Gaining infinite life if infinite power equipped Kalamax connects makes it more difficult for my opponents to kill me.

Hadana's Climb Â  flips if target creature has three or more counters on it thus it has good interaction with Kalamax as a fast way to flip. Winged Temple of Orazca can give Kalamax flying as well as double it's power/toughness. The double of power/toughness is less needed if Kalamax is infinite large, but is quite good when it's not. The double of power with flying is excellent when I only have to do 21 Commander damage to an opponent. Shadow Rift and Leap are not repeatable like the other options, but they're instants that Kalamax can copy. For one mana it makes Kalamax unblockable or flying and draws two cards.

The power of Kalamax's ability comes from when he's tapped. Attacking is the best way to tap Kalamax, but sometimes I'm disrupted can't attack or Kalamax can't safely attack. In these situations having other ways to tap Kalamax at instant speed are needed because Kalamax has to be tapped to copy the first instant each turn. Holdout Settlement and Survivors' Encampment are the best options for tappers because either one or even both can be tutored for with Crop Rotation .

Kalamax has to be tapped to combo. Without a tapper I can only do these combos if Kalamax can attack and at my second main phase. With a tapper I don't need Kalamax to attack; can combo at my first or second main phase or really any phase, mine or opponents.

With a tapper Kalamax can be a big body blocker and also be able to utilize his ability when he's tapped. Kiora's Follower is helpful when using Kalamax as a blocker. After Kalamax attacks, Follower can untap Kalamax to block on an opponent's turn and then use a tapper to tap Kalamax before I cast an instant. If Kalamax can attack then with a tapper I can combo with a Fork at my first main phase to give Kalamax infinite counters. After that untap him with Follower and attack that same turn for potential lethal Commander damage.

Instants that can return to my hand after casting them can be powerful with Kalamax giving me repeatable instants to cast. Narset's Reversal can be a lot of repeatable value since the copy of it from Kalamax can bounce the original back to my hand. It's a repeatable way for two mana to copy any instant or sorcery, mine or an opponents.

Capsize with buyback for six mana with Kalamax can bounce any two permanents on the battlefield and then return to my hand. Sprout Swarm with buyback for five mana with Kalamax can create two Saps. Convoke with buyback is a nice combination because Kalamax and the Saps can help to pay to convoke Swarm. Because of the Saps it's essentially a free instant to cast with convoke. Convoke is another way to tap Kalamax at instant speed. I can use Kalamax to convoke and still trigger it's copy ability with Swarm.

There's 25 instants here that can potentially be imprinted making Isochron Scepter versatile. Activating Scepter to copy the imprinted card and cast it will trigger Kalamax's first ability because the instant is being cast. It won't trigger it's second ability to put a +1/+1 counter because Scepter isn't copying a spell it's copying a card.

It's helpful and honestly important to have repeatable creature token sources with Kalamax. Without token sources then opponent sacrifice creature effects wreck Kalamax because then he's the only creature. I want to keep Kalamax on the battlefield and I can stop most targeted removal towards him, but I can't stop sacrifice effects without tokens. The convoke of Sprout Swarm is very good because Kalamax can be tapped to help to pay for the cost of Sprout which then copies Sprout. Young Pyromancer , Saheeli, Sublime Artificer and Murmuring Mystic give me repeatable token value by doing what I want to be doing with Kalamax which is casting instants.

1x Dryad of the Ilysian Grove

1x Grove of the Burnwillows

1x Into the Roil

1x Learn from the Past

1x Tribute to the Wild