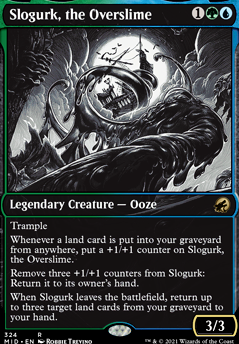 Slogurk, the Overslime spoke to me the moment I pulled the showcase copy from my First Midnight Hunt Set Booster box opening. Slogurk checks all the right boxes;

It was clear that this deck had to be made. So, how do we build Slogurk? Consulting with EDH Rec and other sites, there are several strategies discussed:

To be honest, all of the above plans are viable options. However, a YouTuber pointed out that Slogurk gains +1/+1 counters whenever lands are out into the grave - FROM ANYWHERE - with no hard cap on how big this boy can get. This means you can Mill lands into grave, play lands that can sacrifice themselves to the grave, discard lands in hand down to hand size at your end step, and play ramp spells that let you sacrifice and search for lands. Once Slogurk has 3x +1/+1 Counters on Him, you can pull those in response to removal and bring Him back to your hand which means you get to cast Slogurk without Commander tax AND you get 3x lands out of the grave as well.

A self mill strategy can be employed for massive Slogurk and swing to victory. I have not explored Self Mill in EDH, so Slogurk was born with this goal in mind. We use flashback cards to not have a lack of options. We also have constructed a mana base heavily filled with lands that can end up in the graveyard through sacrifice.

Any deck that mills is a natural ally of Slogurk. We do not mind "Wheel effects" at all and many of our spells have flashback to cast from the yard. That being said, self-mill is not a win condition in this deck, as we are not running Laboratory Maniac or Jace, Wielder of Mysteries. We ARE running wheel cards which prevent us from milling ourselves to death; Echo of Aons, Time Reversal and Windfall. Blessed Respite keeps you alive in a pinch and recycles lands from the grave. These are insurance policies which need to remain in the deck in it's current form.

We are a dedicated land destruction deck. This is why Slogurk is a Jerk. The most powerful spells here allow us to keep on recycling lands for fun and profit. We can pivot in this direction to keep other players in check and threaten land destruction as a deterrence from attack.

+1/+1 Counters power up Slogurk, so there are important cards to do this in the deck. Simic Ascendancy was a formerly included win condition but has since been scrapped after playtesting.

The Ozolith - is a hell of a Counter Insurance Policy. It banks all your efforts and builds a bigger, badder Slogurk.

Since Slogurk puts lands from Graveyard to hand, you just need cards which allow you to play additional lands from hand per turn. Expensive cards like Wayward Swordtooth, Exploration, and Ilysian Dryad aren't required but could slot here if you have copies. Here are some cards that pair with Slogurk to get this job done.

I previously had Simic Ascendancy as a win condition and many +1/+1 counter cards in the deck. However, we found that in playtesting, Slogurk was being pulled in too many directions. Self Mill will be all that is needed for the Counters. You can even bump up to 50 Lands if necessary.

Tolaria West can transmute for ANY land or for Zuran Orb if you need to sac lands for Titania. You can find Boseiju and Channel it for an answer when no removal is handy. You can search for a Strip Mine or Vesuva to start the land destruction chain. The flexibility here is huge and since Simic does not normally have access to tutors, the effect is unexpected.

Token generation is an option to stay alive, but not for victory. Cards like Ayula's Influence and Bearscape - when the sexy version drops - exist to give you a board state. Other than Slogurk, you will not be attacking with many huge creatures for victory.

I actually removed Lightning Greaves because Shroud does not allow +1/+1 Counters to target Slogurk. This is one Commander you will happily let be removed.

Overall power level of this deck is 6.0/10.0. I argue that this is stronger than the average PreCon deck with a robust mana base, but we have boarded in a lack of quality removal options/board wipes and we have no infinite combos. We are vulnerable to graveyard hate and to opponents countering/killing our Commander. Without Slogurk, the deck barely works, so play around these vulnerabilities and slime your opponents!