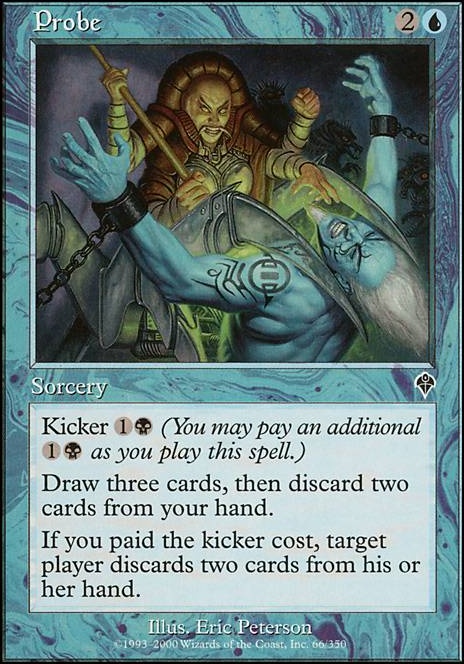 This deck is currently a Lurrus deck however I have changed to and from the Lurrus builds a lot. As of now I have deemed that it is worth it to be playing Lurrus however this is a close decision for sure. Cards like Kess, Dissident Mage, Tasigur, the Golden Fang, and Jace, the Mind Sculptor are all very powerful and might be worth running in the future over the Lurrus builds.

All that being said, I have included the necessary cards to run my Kess version of this deck in the maybe board.

4x Polluted Delta - Fetches 1-4, can get us any shockland in our deck or our sole swamp. It is very important for this deck to play 8 blue fetchlands as it makes our mana base very consistent and lets us get islands at any time.

4x Scalding Tarn - Fetches 5-8, can get us any shockland in our deck and our 4 islands or our sole mountain.

2x Creeping Tar Pit - Acts as an alternate win-con if games go long and as it coming in tapped isn't a big deal since its only a 2 of.

1x Sulfur Falls - The best izzet dual land that isn't a shock in modern. Falls lets us take less damage off of our mana base while still giving us our important colors.

2x Watery Grave, 2x Steam Vents, 1x Blood Crypt - Our shock lands that support the spells we need to play on curve, can be fetched with our fetchlands too. This specific configuration is important to give us consistency and redundancy as well as supporting our most important colors.

1x Riptide Laboratory - An incredible utility land that lets us get extra function out of our Snapcaster Mages. This is a flex slot and I wouldn't push anyone to play Riptide if they're not high on it but it's a very small deck building cost for very high potential upside.

3x Island, 1x Swamp, 1x Mountain - These basics are here to cast our spells through blood moon as well as relatively painlessly with our fetchlands. The 3 blue sources are very important as they allow us to cast Cryptic Command through a blood moon, which can bounce the enchantment and let us cast spells again. We only run one of swamp and one of mountain however because drawing non-blue sources in the early game can make casting our countermagic very difficult.

4x Snapcaster Mage - Simply just the best creature in modern, allows us to get so much extra value out of our spells, can also be a surprise blocker in a pinch. We want the whole set as it gives us so many extra casts on our powerful spells. This is a card that I would never replace in this deck, and I would never play less than the full playset.

2x Dauthi Voidwalker - Do not underestimate this creature as I once did. Voidwalker is so much more than a Leyline of the Void on a stick. It is an unblockable 3 power attacker with grave hate stapled on. Most importantly, Voidwalker's activated ability turns the Tron matchup on it's head, allowing us to counter a karn and cast it ourselves, amongst other powerful plays against big mana decks. Voidwalker, in grindy matchups is grave hate with upside, and against big mana decks, that would normally be terrible matchups, it lets us turn every counterspell into a Desertion.

4x Opt - Simply the best cantrip in the format. Opt gives us so much amazing card selection throughout the game. If you are running more than the singleton Drown in the Loch you should turn these into Thought Scour.

4x Lightning Bolt - The premier removal spell in modern, can kill half the format very efficiently and can become a win-con late into grindy matchups when paired with a Snapcaster Mage. If you combo two bolts with lab and snapcaster you can do 9 damage instead of the normal 6 for bolt snap bolt. In my opinion, with how grindy this deck is, I would not play less than the full playset of bolt. This deck wins the game through tar pit attacks and dauthi and snapcaster attacks, a good percentage of our games are finished with bolts.

3x Fatal Push - A more conditional removal spell without the flexibility of bolt but still capable of killing many things that bolt cannot. We only play the 3 because it becomes more useful past the first few turns when we have a higher chance to draw it, additionally it can't be pointed at the face in control or attrition matchups.

3x Kolaghan's Command - An incredibly flexible card, K Command lets us remove small creatures and artifacts, recur creatures, and force our opponent to discard. This card just gets better after game one as well, in post board games we can recur our creaturewalkers in the form of JVP. We specifically play 3 because of the singleton Rise / Fall, if it weren't for that card I would consider the fourth K Command.

1x Izzet Charm - A pet card of mine, Izzet Charm gives us extreme flexibility between removal, countermagic, and card selection, all on a 2 mana instant. Charm gets better with snapcaster as it can act as 2 different spells each time it is cast. This card is not good, do not play it if it isn't a pet card of yours.

4x Counterspell - Counterspell has heavily proven itself to me. This card is incredibly efficient and powerful and having a hard counter to anything on 2 mana actually lets us keep pace with the fastest decks in the format. As long as your deck is primarily blue I would be playing 4 CS.

3x Archmage's Charm - For 3u with this spell you get 3 incredible effects. Countering target spell is strong, drawing two at instand speed is strong, and permanently gaining control of a token or small creature is incredibly strong. The only downside is the strict mana requirement Charm has to be cast on curve. Similar to Izzet Charm, A Charm gets much more powerful with snapcaster as it can be a counterspell on turn 3 and a flash mulldrifter on turn 5.

3x Cryptic Command - A wise man once said that you cannot die on a turn in which you can cast Cryptic, this is very much true. CC is still one of the most powerful and versatile spells in the modern format and any control deck is worse without it. I have yet to find myself wishing I had a faster spell in the place of CC but there is certainly an argument to be made to play the fourth A Charm before the third CC.

1x Rise / Fall - This is a card I have been testing for the last week or so and it has really overperformed. The Rise half is often times just a sorcery speed K command for 2 mana which is very powerful but sometimes it can also help us deal with a Murktide Regent or an Urza's Saga token very effectively. The Fall half isn't the reason we play this card but often times if you get a good read on your opponent's hand you can just Hymn to Tourach them, especially against aggro decks that are low on lands which is an archetype that we have a bad matchup against.

1x Dreadbore - A one of catch all removal spell that can destroy any of the most powerful threats in the format is really strong. This is a flex slot that can be filled by either a dreadbore, Angrath's Rampage, or Terminate, as all three can kill any creature. Right now I am on dreadbore as it can also kill walkers in the attrition mirror.

1x Fact or Fiction - The best big card advantage spell in the format is even better in this deck. With FoF we can either draw 3+ for 4 at instant speed or can get us the best card out of our top 5. Additionally, with K command and snapcasters, anything that goes to the yard just comes back later in the game.

Disclaimer: This sideboard is made for an in-store LGS meta that can be expected to be very broad. Most of these cards are made to be answers to deck archetypes not specific meta decks.

Additionally, depending on how you feel on any given day, you can swap around 2 voidwalkers and the pyromancers in the main.

3x Engineered Explosives - A very powerful mass-removal spell right now that can be recurred with Lurrus in grindy matchups. EE allows us to board wipe with mana efficiency against token and tribal decks as well as deal with permanent types that our colors can't normally deal with. EE allows us to remove enchantment and planeswalkers very easily.

2x Alpine Moon - A decently powerful land hate spell that hits the most powerful lands in the meta right now (tron and urza's saga decks) that fits into our Lurrus plan and can be recast if it's removed.

2x Young Pyromancer - Our go-to game 2 win con against decks that will actually plan to answer our game 1 win cons. Young Pyromancer attacks from an entirely different axis from our other threats and will counter the sideboard plans of decks like UW control and Jund that seek to answer our threats. Pyro is also great against go-wide decks as it can act as a red Moat.

2x Dauthi Voidwalker - Copies 3 and 4 of Dauthi allow us to answer graveyard strategies as well as providing a massive tempo swing against big mana decks. Dauthi is capable of being a bad Leyline of the Void against graveyard strategies and can turn all of our counterspells into Desertions against decks like tron and amulet titan.

2x Dress Down - This is a very powerful and flexible sideboard card right now. It completely nerfs certain decks and just slightly disrupts others but it hits about 60% of the meta. Dress Down famously insta-kills Urza Construct tokens, turns Prime Time into a vanilla 6/6, turns DRC into a vanilla 1/1, insta kills Scourge of the Skyclaves, turns goyf into a vanilla 0/1, and many other powerful things. Additionally, with Lurrus out you can actually lock out abilities with Dress Down.

1x Jace, Vryn's Prodigy Â  - This is another alternate win-con for the deck, additionally it's a powerful planeswalker and card advantage engine that can be recurred with K command, Rise / Fall, and Lurrus. Finally, JVP allows us to win the game without damage through his ultimate which is relevant in some matchups.

1x Dreadbore - Originally intended to be an answer to Teferi, Time Reveler, Dreadbore #2 has turned out to be an all star against Murktide and other big creature decks. Having an additional unconditional removal spell that can answer any threat in our deck is super important.

1x Kolaghan's Command - K Command #4 comes in against artifact decks or in grindy matchups where the additional creature recursion is very powerful. For the most part K command #4 does the same thing copies 1-3 did.

(P.S. The deck is called Skate Park because the route to victory is casting tall lanky malnourished white skater kids)

Over the course of this weekend I have gone 12-0 in games and 6-0 in matches and taken down two separate events. This list that I am on right now feels very optimal and I don't quite know where to go from here so until I run into difficulties in matchups or start losing I don't intend on switching things up. This sideboard plan has also been very powerful and flexible.