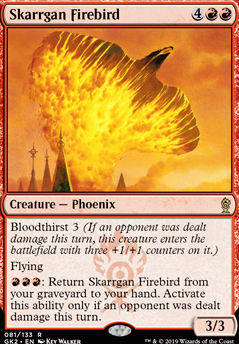 Red has many weaknesses, but with pauper EDH they suffer from a lack of draw and recursion. in-addition, with a lack of creature protection and recursion means that once a creature dies, their dead till the cows come home. Or, in the case of your general, he/she starts to cost more each time he/she dies and quickly gets to the point you can't afford your general...did I also mention red suffers from a lack of meaningful land excel? That's why more so than any other color, the actual general and what he/she does really matters for red. Let me introduce Skarrgan Firebird .

She has a natural recursion ability that makes it so that once you cast her from your command zone, you can let her die repeatedly (with zero protection she will a lot) with little fret. Her recursion is easy to activate, damage through combat or one of reds many TIMS (or toms if you prefer) will do. Hell, even other players hitting your opponents triggers her recursion (just be sure to pay ). Also a 6/6 flying body is not chump change.

She also alleviates red's other weakness...draw. with the printing of this crazy guy Wizards has finally cemented draw for red...even if it is awkward and terrible. But don't worry, Firebird solves this by being your personal squeeZE. And after a while you can even build card advantage in monored (albeit expensive and inefficient). And the idea of card advantage for a monored mage brings a tear to their eyes...which turnout to be only fireballs so be carful.

Lastly, red at the common level is getting more and more sac outlets, so when you want your general dead (so you can put her in your hand) or you want to stop 'It that shall not be named' from making you forfeit, you can.

I've had a lot of fun with her, and as a red mage, I'm interested in your thoughts on potential improvement and other monored EDH decks you guys have built. Give me a shout, especially with those decks.