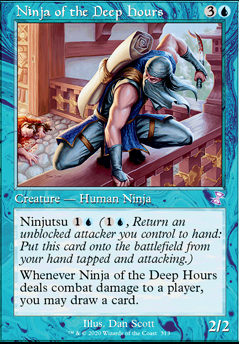 I recently played Ghost of Tsushima for the first time, and after the majestic grandeur of the game set in I knew I wanted to build something of the same flavor. Yes, Samurai and Ninjas are different blah blah blah, you know what I mean. I threw this together to capitalize on the neat aspects of ninja trickery. Enjoy!

Nothing too crazy here. We derive the bulk of our mana from basic islands, and to supplement this we run two different support lands.

â¢Halimar Depths lets us stack the deck in our favor, setting up subsequent turns.

â¢Skyline Cascade helps slow the early game down if weâre getting hammered by weenie or aggro decks.

Thatâs not the spell youâre looking for.

Any opponent worth their salt will spot our basic game plan a mile away. Itâs imperative that we be able to protect our unblockable creatures, as theyâll be sitting at the top of the Empireâs Most Wanted list. We run a plethora of spells ranging from countermagic to tempo to augmentation, all in the name of protecting and bolstering our admittedly wimpy creatures.

â¢Counterspell is the best of the best, and in mono is an automatic inclusion. Fizzle anything remotely threatening and set yourself up for victory.

â¢Memory Lapse is a grand old spell from bygone days of yore. Reduce the opponent to tears by butchering the tempo of their game. Odds are good weâll be able to nimbly sidestep it again the following turn anyway.

â¢Vapor Snag doesnât hit Enchantments, Lands or other permanents, but thatâs what a Sideboard is for. Weâre really only looking to keep the battlefield relatively clear and remove creatures with particularly formidable abilities, and the bonus 1 point ping is helpful.

â¢Smoke Shroud proved more useful than it looked at first glance. Our Ninjas will be doing most of the heavy lifting as we plod along to victory, but itâs no secret they arenât very powerful. There are an endless supply of +X/+X spells we could choose from, but Smoke Shroud has value far beyond its initial castingâ¦

Strike me down, and I shall become more powerful than you can possibly imagine Show

If left attached to whichever ninja it entered targeting, we gain the benefit of adding +1/+1 and flying, thus making it all the more likely that ninja will be able to push damage through the following turn. But Smoke Shroud really shines when we bounce the creature itâs attached to (or if that creature should happen to be otherwise removed). Should that occur, the Enchantment, being an aura, will go to the graveyard. Itâs now safely hibernating until we ninjutsu in our next ninja, at which point we may reattach it for free. This loop performed rather well in playtesting, and Iâm very happy to give it a home here.

Help me, Shinobi-Wan Kenobi! Youâre my only hope.

The main strategy is simple and effective. We want unblockable creatures on the battlefield and attacking, at which point we can exchange them in a puff of smoke for our ninjas waiting in the wings.

â¢Triton Shorestalker and Slither Blade are a lot like C-3PO and R2-D2. Theyâre small, weak and seemingly inconsequential, and yet when the bantha fodder hits the fan they save the day. About as defenseless as C-3PO, they will be completely reliant on support magic to avoid removal. Both are lightning rods and neither is boltproof, so expect the hate.

If we do manage to deflect any vitriol hurled their way, once they are declared as attackers and are subsequently not blocked itâs time to strike from the shadows.

â¢Mistblade Shinobi will likely be the easiest ninja to get into play, costing a lone . His ninjutsu ability will help tremendously in the early stages of the game, bouncing one of the opponentâs creatures back to their hand and turning back the clock on their boardstate, leaving them likely a turn behind. Eats tokens for breakfast too!

â¢Ninja of the Deep Hours (old school card frame, of course) is probably our MVP. Between the various bounce spells and effects slowing the opponent down and abilities like this one putting more cards into our own hand, the potential is here to quickly turn the tide in our favor. At 2/2 he doesnât hit very hard, but weâre in this for the long haulâand a bit of Ninja-nuity (Ninja+ingenuityâ¦Boo!) in the form of Smoke Shroud does add up over time. Itâs all about control, tempo and a gradual wearing down of our opponentâs defenses.

â¢Moonsnare Specialist is another tempo adjuster, returning a creature of our choice to its ownerâs hand. Worthy of note is that this potentially includes our own creature, which opens up all sorts of bouncing ninja shenanigans. Light on cards? Set up another draw by returning Ninja of the Deep Hours to our hand. Need a little extra oomph to finish off the opponent? Bounce whichever of our ninjas Smoke Shroud is enchanting. The aura spell will go straight to the graveyard and when the bounced ninja is ninjutsuâd in again, you may reattach it free of cost.

â¢Protect the unblockable creatures (or ninjas thereafter) with countermagic, bounce or tempo spells.

â¢Abuse the ninjutsu capabilities of our ninjas, appearing out of nowhere and slashing from the shadows, vanishing into the smoke, only to strike again.

â¢Spell Pierce is a classic multitasker.

â¢Boomerang can target any permanent, helpful when facing down Tron, or Artifact or Enchantment heavy decks.