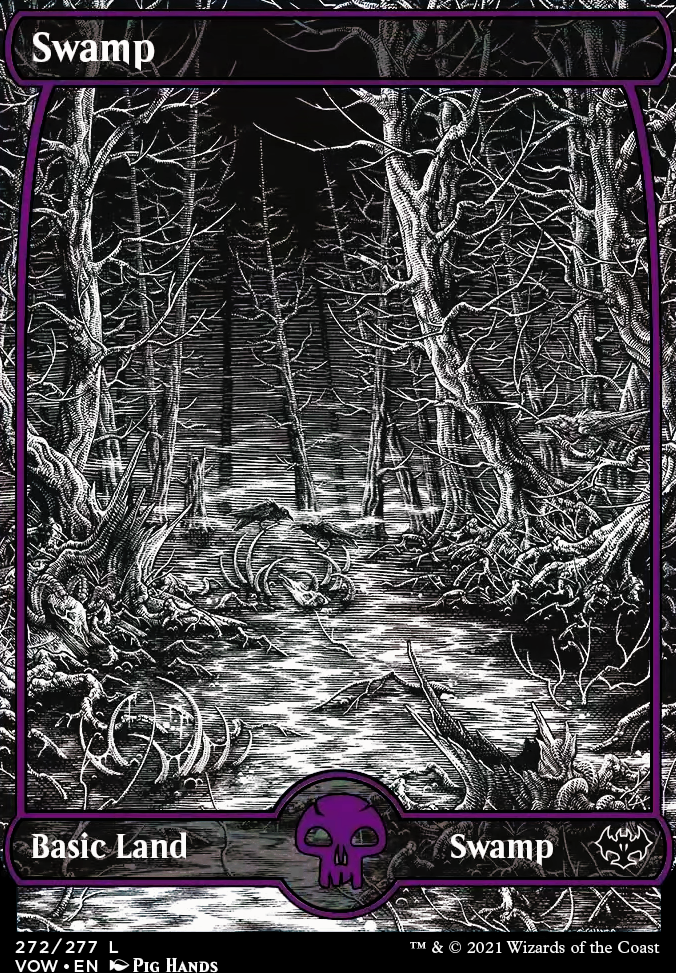 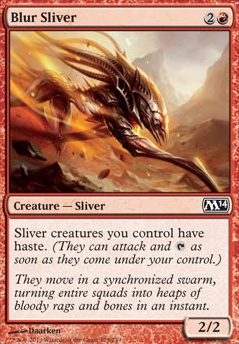 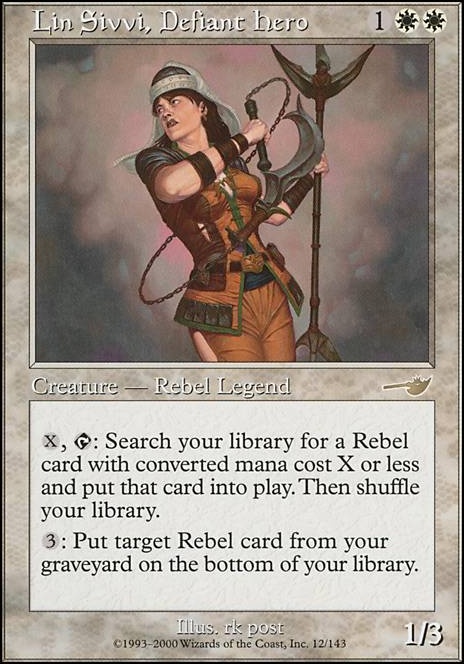 Hello, and thanks for viewing my deck.

This is my attempt to bring a favorite deck from many years ago back to life in today's gaming environment. I have always enjoyed playing Rebels due to their recruiting ability. In years past, quite a few Rebels were introduced - most with some cool little ability which provide the opportunity to incorporate various sub-strategies into a deck.

I realize that I tend to attach large "Maybeboards" to many of my decks which may seem ridiculous to some, but I find it helpful as I play test and ponder new ideas. Hopefully, it also helps others to have a handy list of the most commonly used cards for a given deck archetype readily available in one location. Think of it as a template as you design your own Rebel deck.

Addenda: This is turning out to be more of a challenge than I expected. Rebels were once a proud Tribe, but they have been left behind over the years. When I look at other Lin Sivvi decks, they have more non-Rebels in them than Rebels, so it is hard for me to consider them "Rebel" decks. Black has a few Rebels, but nothing exciting. Green has one Rebel - but it recruits Elves. I would prefer to keep this a White Rebel deck, but I may have to splash another colour. Perhaps I can wrap my mind around the idea of a Rebel/Elf Alliance.

I am always open to hearing ideas from others on potential improvements to my decks.

Once I decide that I am going to construct a new deck around a given archetype (i.e. tribal, affinity, combo, control, mill, etc.) and flavours (i.e. Vampires, Slivers, weenie, stompy, colour(s), etc.); my first thought is, "What game mechanics do I want to incorporate to create a deck that is fresh, fun, interesting, and reasonably competitive?"

Once I have a general idea what I want, my next thought is, "How am I going to win the game?". From there I begin considering my Wincons and studying what cards will take me to my desired end state.

When building a deck, I feel it is important that one can quickly and easily articulate a purpose/reason/mission for each and every card in the deck. Trying to decide what to pull when considering a new card for the deck should be a painful experience.

Simply put, this is a go wide deck designed for combat. The primary strategy is to utilize the Recruiters to quickly amass a formidable Rebel army and destroy my enemies by fire and maneuver.

I typically strive to keep my decks within theme, nevertheless, a few non-Rebels managed to work themselves into the deck. Rebels can be put directly into play from the library once I have a recruiter or two on the battlefield.

The relatively low cmc average allows me to control the tempo of the early game in most cases; keeping my opponents on the defensive and disrupting their ability to develop their own battle plans.

I never keep an opening hand which does not contain at least one land.

This deck is hungry for mana in order to build the force quickly. Colourless mana provides the vast majority of the fuel required to take the deck to victory. Besides having a fairly solid Land base, the deck utilizes numerous mana rocks (Artifacts) such as Basalt Monolith , Gilded Lotus , Mana Crypt , Mox Opal , Nyx Lotus , and Sol Ring .

I chose Snow-Covered Plains as my basic Land so that only I would gain benefit from Extraplanar Lens . Once I begin to get a sizable board developed, Nykthos, Shrine to Nyx , Serra's Sanctum , Extraplanar Lens , and Nyx Lotus begin to produce mana at rates my opponents can not compete with.

Card advantage is an important aspect of any winning deck. To ensure I always have cards in hand, I included Mangara, the Diplomat , Inheritance , Endless Atlas , Mentor of the Meek , and Gift of Estates . For top deck manipulation, Sensei's Divining Top . So far, I have not included any fetch lands on the theory that the multiple Tutors and Recruiters, among a few others, will give me ample opportunity to force a shuffle if I am dissatisfied with what I have stacked at the top of my Library.

This deck is heavy with artifacts to include Artifact Creatures and an Artifact Land to help obtain metalcraft for Mox Opal as well as to take advantage of their built-in abilities. Likewise, the deck runs a few more Enchantments than many EDH decks.

Once I cast the first Recruiter or two from my hand, I use them to recruit bigger and better Recruiters during the early game. You almost always want to save your mana and recruit at the end of your opponent's turn. This keeps your mana available if a "situation" arises and avoids dealing with summoning sickness during your turn. Lin Sivvi, Defiant Hero is the most mana efficient Recruiter in the game and getting her on the board early pays big dividends as the match progresses. An important distinction is that your Recruiters do not "cast" a Rebel spell. Rather, they put the Rebel directly into play. This means that your recruited Rebels are immune to counter spells or any card which slows, stops, exiles, or alters a "Spell".

Most of the Rebels in the deck provide various abilities and benefits - recruit those you need to meet the specific situation you face. You can recruit at any time you have priority!

Recruiters do not "cast" a Rebel spell. Rather, they put the Rebel directly into play. This means that your recruited Rebels are immune to counter spells or any card which slows, stops, exiles, or alters a "Spell". For those creatures you do have to cast from your hand, Cavern of Souls can help ensure they make it onto the battlefield.

Mother of Runes and Giver of Runes are worth their weight in gold to help me survive until I can assemble my forces and to protect against attack.

Reconnaissance is an incredible card in any deck with attack triggers and doubly so in a deck with a go wide strategy, such as Rebels. The ability doesn't prevent damage that has already been dealt, it just removes the creature from combat (after which it can't deal or receive damage, hence the reminder text). To put the card to best use, attack with all your creatures (even a 0/1). Once your opponent has assigned blockers, untap any of your attackers facing an immediate lethal threat. After first strike damage is assigned, but before normal combat damage, untap any creatures still in peril. Finally, untap any remaining creatures after normal combat damage is dealt, but before the combat phase ends. This plan will leave you with all your creatures intact, untapped and ready to block or activate abilities.

Lightning Greaves provides Shroud and Haste to the equipped creature. With no equipping cost, you can freely move it around as needed from creature to creature (you control) during (only) your turn and when the stack is empty. At the end of your turn, put it on your most vulnerable/important creature to ensure said creature makes it through to your next turn.

Once I have a few Rebels in position, Coat of Arms will pump the entire army into an insanely powerful force. If you have a changeling on the field, remember that it gains +1/+1 for EVERY creature on the battlefield. Most of the older Rebels and Mother of Runes have updated errata assigning them the additional sub-type, "Human", allowing me to also pump most of the non-Rebels. Do use a little forethought before throwing Coat of Arms onto the table as it's ability will also apply to your opponent's creatures.

Combining first strike with deathtouch, via Basilisk Collar , is a devastating attack for any attacking or blocking creatures. It can also pay to think outside the box when considering deathtouch as deathtouch applies to ANY damage a creature inflicts - so, for example, Ballista Squad equipped with Basilisk Collar can take out most any attacking or blocking creature before combat damage is dealt!!! The same thought process can be applied to a collared Zealot il-Vec or Walking Ballista to remove seemingly undefeatable Creatures from the battle.

Lin Sivvi, Defiant Hero and Ramosian Revivalist can bring Rebels back from the graveyard (to include Bound in Silence ).

Ramosian Revivalist recruits from the graveyard. He is expensive to use, but it puts your Rebels directly back into play at Instant speed. Typically, I hold Ramosian Revivalist in reserve and only put him on the board if I need to bring back a key Rebel or to recover from a board wipe.

I included Argivian Archaeologist and Buried Ruin to help get key artifacts out of the Graveyard and back into the game.

This area is under construction - check back often

Deserted Temple + Nykthos, Shrine to Nyx + Rings of Brighthearth + devotion to white of 6+

With any Rings of Brighthearth infinite mana combo, you can add Sensei's Divining Top to draw out your deck.

I am currently using the "Sideboard" to hold cards which I am play testing and/or want to move into the main deck.

Thinking about putting Captain Sisay into the Commander slot and moving Lin Sivvi, Defiant Hero into the Main Board. The deck already has quite a few Legendaries which would make Sisay a valuable Tutor. This would also allow me to splash Green and slide in a Gaea's Cradle .