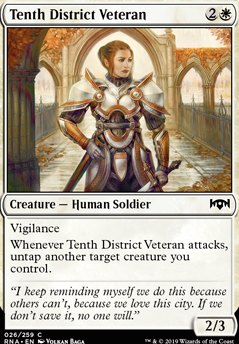 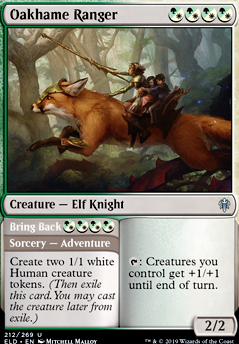 The gameplan of this deck is to build a large board state woth several small creatures, then make them all into much larger threats using Oakhame Ranger's activated ability. To go with that, I have 4 other themes. First, creatures that draw cards upon entering the battlefield or dying allow us to build that wide board state without depleting our hand as badly. Next, we have creatures that tap opponents' creatures when they attack, which both lets us connect for more damage and keep our creatures alive easier. Third, cards that give vigilence let us both attack with and activate our commander in the same turn, effectively making our board even wider and more effective. Lastly, we have some effects that can untap our Ranger, allowing us to activate its ability multiple times in one turn.

The obvious comparison here is Woodvine Elemental , which also specializes in buffing a whole team of attackers. I prefer Oakhame Ranger, though, because the buff is more predictable and the commander has attached token production, which helps keep you from depleting your hand. I also think Oakhame will be a bit faster just because you will always have a turn 4 and turn 5 play that builds your board. Many people who build this deck will probably try to tilt it more towards aggro by playing more cheap token producers like Scion Summoner and Seller of Songbirds, but I prefer the cantrip creatures because they give more consistent access to untap and vigilance effects.

This deck's weaknesses are counterspells and board wipes like Pestilence. Wipes can get rid of most of the board state you mostly expended your hand to build, while a counterspell aimed at the token generating half of your commander will usually set your deck back a whole turn.

I was pretty pleasantly surprised by the deck the first time I played with it. On turn 7, I was able to attack with 8 creatures and activate Oakhame's ability 4 times. Even with 3 blockers, I still connected for 25 damage and lost none of my attackers.

For future improvement and experimentation, I am going to try adding a few more mana dorks like Druid of the Cowl to increase the mild elf tribal theme and make it easier to recast the commander if it's removed multiple times. Hopefully this alsp speeds up the deck a little and allows for big swings to happen half a turn earlier, on average.