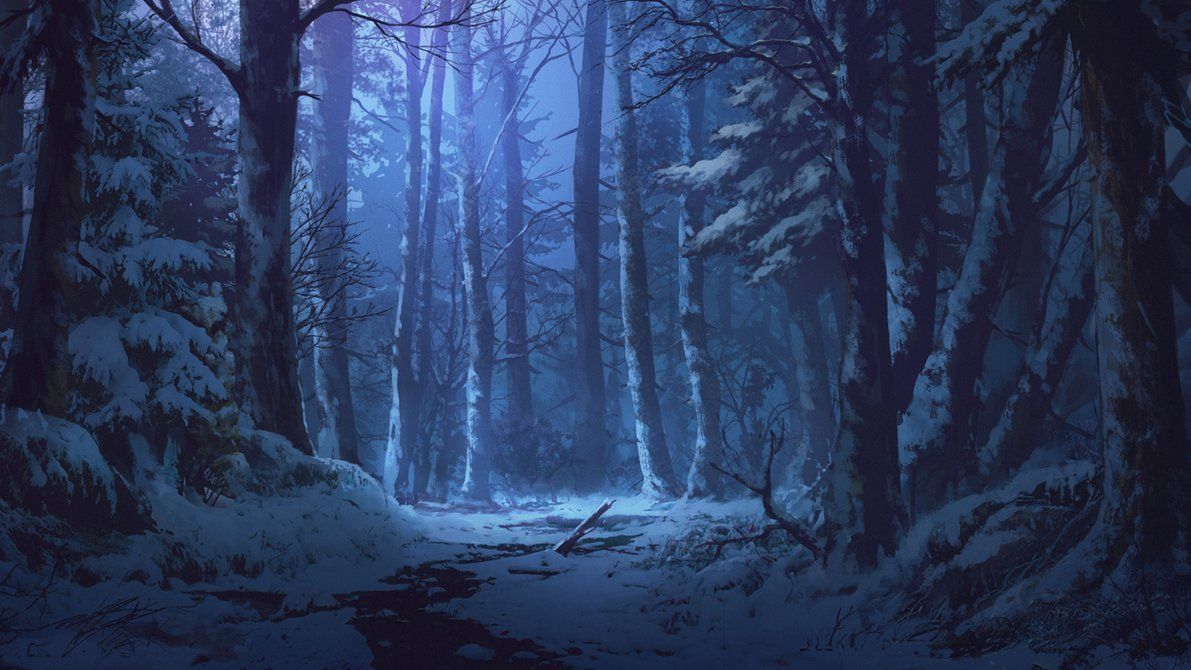 Snow fell softly in the dark wood. The wood itself remained still as the countless snowflakes tumbled and fell onto tree, bush, rock, and ground. Soon the whole forest was frosted over in the chilling embrace of winter. The hours of the night passed slowly. A quarter moon shyly rose above the tree tops, shedding some light throughout the eerie wood. Shadows of leafless trees stretched themselves across the snow, like bony fingers reaching-attempting to grab something, anything. For a while, nothing moved but the swirling snow, still covering the woods like an icy blanket. After a time a new shadow appeared. Unlike the shadows of the trees, it was moving. It was the shadow of a man, who stumbled out of the darkness into a clearing. Into the light of the weakened moon stepped the man, hooded and cloaked in black. He was hunched over, arms crossed tightly, as if that was how he was holding himself together. He was breathing hard, as if he had been running, and his breath clouded the air. The man looked up, and the moonlight revealed a harrowed face, as white as the snow he stood on, and contrasting dark eyes, blacker than even the darkest parts of the wood. The man's face was a mixture of anger and hatred, yet also sadness, regret, and the deepest hopelessness. All the signs of a man living a tortured existence. He quickly bowed his head, as if he didn't want the moon, or anything else for that matter, to see his face. The man trudged on, occasionally stumbling in the deepening snow. He had no consistent direction, he didn't seem to care where he was going. He didn't seem to notice the cold. He frequently shot nervous looks over his shoulder, or would stop and wait in silence as if listening for pursuers. But there were no other living creature in the wood with him; his only pursuers were his memories. A chilling wind picked up slightly, sending snowflakes swirling around the man. To the man's horror, the snowflakes seemed to transform into the horrible memories he had been running from, each one more gruesome than the next: memories of tragic things that happened to the ones he loved, horrible things that happened to him, and the terrible things he had done to countless others in response. The lives he had destroyed, the souls he had corrupted, the bodies he had mutilated. The memories seemed to make the man cry in anguish and regret, but his sunken eyes were no longer capable of producing tears. The man closed his eyes tightly, but couldn't escape the vivid memories of the torture and blood. He covered his ears, but he could still hear the screams. The man fell to his knees, shaking and shivering. The deep cold of snowy forest were no match for the afflicted man's burning heart. The man let out an anguished scream that totally shattered the silence of the dark wood. The scream nearly tore his throat apart; blood spilled out of his mouth, adding color to black and white landscape. The scream seemed to wake the man out of his nightmare of remembrance. He uncovered his ears and straightened his back. His face was calm but deathly. He surveyed his surroundings, and crossed his arms again. He stood, walked over the blood on the ground, and was quickly swallowed up by the darkness of the woods, his footsteps receding into the distance. The wind died. Snow continued to fall, and slowly started to cover the blood on the ground. The wood returned to the silence of winter, but it would never forget that scream.