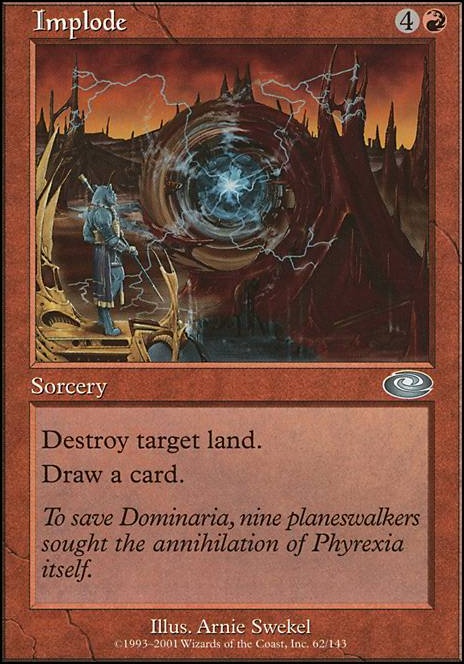 There is no sugar-coating it; this is a MLD deck. For those who don't know, MLD stands for Mass Land Destruction. The purpose of this deck is to continuously destroy all lands throughout the game, while recovering our own lands with our commander Lord Windgrace. His ability to get two lands back from our graveyard to the battlefield UNTAPPED is just begging to abused. Not only that, but he synergizes wonderfully with the best MLD cards such as Obliterate and Jokulhaups because he is unaffected by them. Being a Planeswalker commander makes him especially powerful, and there is a minor super-friends theme to the deck.

So, blowing up lands is not going to make you any friends. I love doing it, but there are real ramifications to doing so. You can lose friends playing this archetypes. Heck, be prepared to close the door on potential friends if you sit down with strangers and use a MLD deck. If you are playing with old-school MTG players who used to jam Armageddon in Type-2, then you won't get many complaints. Newer MTG players haven't had to deal with MLD archetypes very much, so they are especially pissed off when they get their lands destroyed. In my opinion, discovering players who will not scoop after a Decree of Annihilation while you have a Planeswalker out makes it all worth it. Those sorts of players are the sort of people you want as friends, because they'll stick around during hard times. â¥

If you are still okay with playing MLD after reading that, then let's get into the finer details of the deck. This deck tends to spend the first four turns ramping, ironically enough. Birds of Paradise into Sakura-Tribe Elder into Harrow is always fun in a green deck. We tend to play our commander on turn five, mainly because our MLD cards become symmetrical without him. We run several creatures to help defend him, such as Geode Rager and Multani, Yavimaya's Avatar. Sandwurm Convergence is a great way to protect our green deck from flyers, while also creating tokens to further protect Lord Windgrace from ground threats. It is also an enchantment, which evades our board wipes. Constant Mists works as a great repeatable way to protect ourselves and our walkers from pesky combat damage, especially since we can recur the lands we sac.

I recommend having at least two value-generating permanents out when we decide to blow up everything. Planeswalkers and Enchantments dodge our boardwipes, so these are the two to focus on. Abundance seems harmless to most opponents, but is a great way to refill our hands with lands after a Boom / Bust. The Mending of Dominaria gets our lands out of the graveyard eventually, and is a surefire way to especially piss people off if you blow up all the lands with this saga out. Tibalt, Cosmic Imposter can steal lands he exiles from opponents, while Wrenn and Seven digs for lands we may not have in our hands.

There is a Lands subtheme to the deck, though this deck does lean pretty fully into the MLD theme. Repeatable Dark Depths tokens with Thespian Stage can be made slowly with recursive cards like Crucible of Worlds and our commander. Evolution Sage let's us turbo-charge our Planeswalkers with its bonkers landfall-proliferate ability. I have won this way a few times. Field of the Dead can make many zombies when we aren't blowing up lands (duh), and The Gitrog Monster can draw us a lot of cards when we are destroying or sacrificing lands (also duh).

This deck tends to win mainly by making opponents tap out of the game of endurance it forces. Destroying all lands multiple times during a game wears on people pretty quickly, especially when we don't seem that badly affected by it. Despite that, we can still win through more conventional means, such as through attack with big dumb creatures and directly dealing damage with Seismic Assault. This may not seem like a powerful deck, but I win with it pretty consistently. It is deceptively powerful, mainly because EDH is a very lands-reliant format when you aren't playing with money-decks full of low-cost mana rocks. Just remember to let people know that you are playing Land Destruction before playing with them, if you want to keep or make friends while using this deck. Some men just want to watch the world burn, though. If that's you, take this deck into a random shop and watch people curse at you for playing such a meanspirited archetype. â»

All of these lands belongs to you, my son.