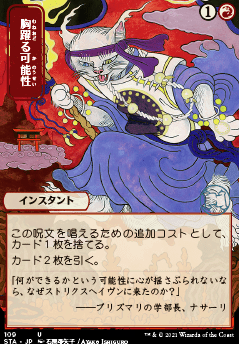 The deck is a Krark Sakashima combo deck revolving around casting copious amounts of spells and copying them until you can win the game in fashion with 800 lightning lightning bolts.

It's really fun to play, but maybe not so fun your opponents once the combos start. The fun part is that the win con can be different every game, instead of just tutoring for one card every time. Once you get a combo going, you might be able to cycle through 20+ cards in a single turn before winning (I've done this in testing as early as turn 2).

Basic combos (Everything here will require Krark to be in play):

This is one of the fastest and easiest combos in the deck. Turn 2 Krark into turn 3 Jeska's Will and a little bit of luck and you can straight up win the game. The card draw allows you to utilize the mana from Jeska's to be able to do many of the more advanced combos listed below, beginning a combo chain. Ramp can speed this up to a turn 2 win.

Both of the creatures listed above can generate massive value from casting spells. They will give you mana for casting spells, with Tavern Scoundrel creating treasures upon a good Krark roll and Storm-Kiln creating them on every cast AND every copy. This means you can cast cheap draw spells while making the mana back or even GAINING mana from that card advantage. Now it's just a matter of doing this until you hit a more powerful card or combo that can win the game.

Create enough mana to cast Sakashima as a copy of Krark. Use excess mana from one of the many ramp spells or mana rocks to cast heat shimmer targeting Sakashima. Pray to the lords of chaos that it is copied. If it is copied once then sent back to hand this is optimal. It can now be cast again with an even higher chance of success as there will now be at least 3 Krarks on the board. Continue doing this until you are satisfied with the amount of Krarks and then copy a ramp spell an indefinite amount of times until ludicrous amounts of mana and then find a win con.

This combo requires a bit of setup, but if it comes online, many cards will be drawn. Using Sakashima to create 2 Krarks and combing it with the double spell trigger from Veyran or Harmonic, each gitaxian probe will cause 4 Krark triggers. Gitaxian probe can be paid for with 2 life meaning it can be cast repeatedly after it is sent back to hand. 4 triggers means 4 chances for it to be sent back. Most likely it will be cast quite a few times before getting copied 4 times in a row and going to the graveyard, resulting in an insurmountable card lead and a view into everyones hands. Adding a Storm-Kiln or a Scoundrel pretty much guarantees the win.

Very similar to the last combo, however gut shot does not generate card draw. Instead, this relies on having either Storm-Kiln or the Scoundrel out in order to generate a ton of mana. Worse comes to worse you can still kill most of the enemies board with a bunch of shots to the gut.

Bonus round is probably one of the most underrated and broken cards in the deck. With a successful double copy of desperate ritual or pyretic ritual, bonus round can be cast 3 times just with the floating red mana. Each time it is copied, the next time the copies will double, since the copying effect lasts the entire turn. With enough copies, any cheap draw spell can turn into a "draw my entire deck" spell, and a lightning bolt can one shot 3 other players simultaneously. Synchronizes very well with Jeska's and heat shimmer too.

Strike it rich, rite of flame, and brightsone ritual all require only one red to cast and create a treasure, 2 red, or 1-2+ red respectively. Using Storm-Kiln, these spells are practically free, as he will create a treasure upon cast, whether or not they are sent back to hand, allowing for them to be cast again using the treasure. Sakashima allows for a copy to be made and for the spell to be sent back to hand to be played again. The copy will create extra mana, along with an extra trigger from Storm-Kiln. This can generate a ton of mana from a tiny spell, allowing you to cast any draw spells, heat shimmer, bonus round, Jeska's, or any other combo cards in your hand or even just straight cast Epic Experiment for a large and pray it goes through.