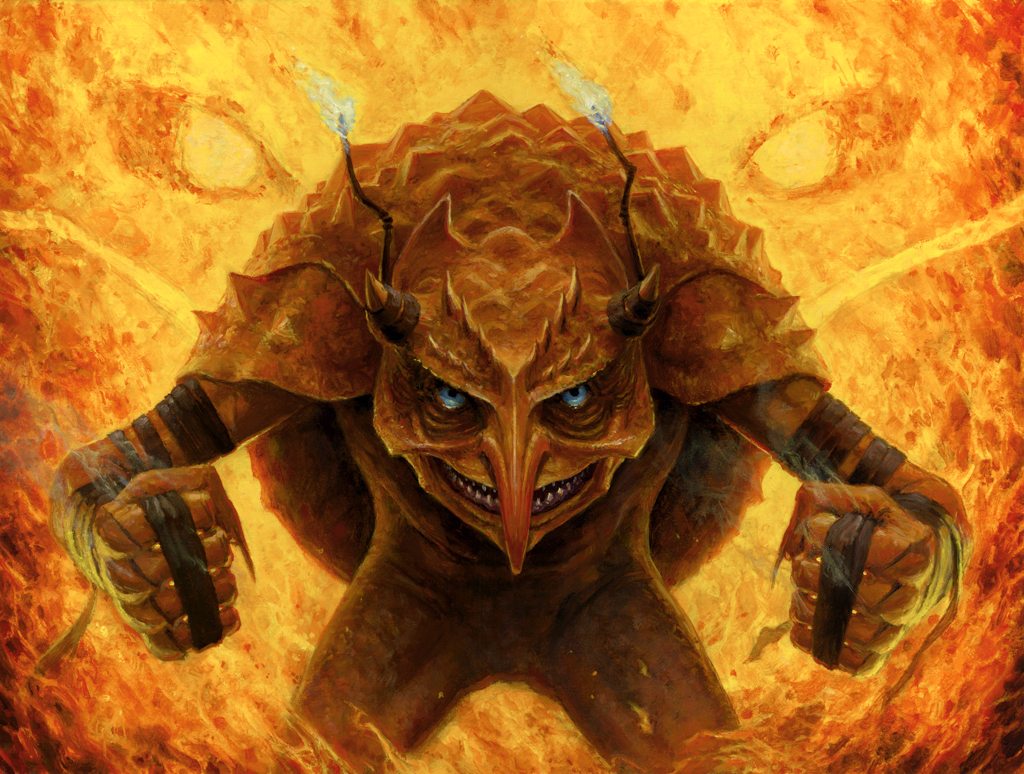 I chose Kiki-Jiki, Mirror Breaker as my general because of the potential chaos he can cause and I rather enjoy that. The deck's general focus is the synergy between Kiki and nearly every creature in the deck and other various cards. There are also a few infinite combos involving Kiki and some not.

Basalt Monolith + Rings of Brighthearth = infinite mana, using that with [comet storm]] to clear out the table.

CARD DESCRIPTIONS AND REASON OF CHOICE: Work in Progress

Clone Shell- allows you to dig and grab your powerhouses and other various creatures.

Duplicant - either can be used as spot removal or play it not exiling something and from there using kiki to copy it and having the copy removing troublesome targets.

Goblin Matron- allows tutor of our various goblins or if kiki gets tucked.

Godo, Bandit Warlord- tutors up your swords or your Thornbite Staff. Big body to beat down your opponents.

Hellkite Tyrant- Your typical dragon but with a great ability in EDH. nearly every deck is going to be running artifacts and who knows you might even get 20+ artifacts for the win.

Hoarding Dragon - great synergy with kiki to be able to keep using the ability. tutors up your great selection of artifacts.

Inferno Titan- One of the major beaters in the deck, easy target to abuse with kiki.

Lightning Crafter- Lightning bolt ability on a creature, infinite combo with kiki and a sacrifice source enabling infinite bolts to everything of your choosing.

Mindclaw Shaman - Great ability in EDH and super fun to abuse. lots of potential big plays with this guy's ability.

Mogg Fanatic- One of you many potential combo pieces with kiki

Myr Retriever- allows for recursion of your artifacts after a board wipe or some sort of removal spell. again great synergy with kiki.

Precursor Golem - three 3/3 golems for 5? why not! continue copying precursor with kiki for even more 3/3s? hell yes!

Ravenous Baboons - removal on those pesky non basic lands all those 5 color players may be using.

Siege-Gang Commander- Another abusable token generator like Precursor Golem but with a unique ability to turn your tokens into fodder in shock like abilities.

Urabrask the Hidden - Bringing two great abilities, giving haste to your guys and putting your opponents one turn behind you.

Wurmcoil Engine- Big body with lifelink and deathtouch, that just keeps kicking after being taken out. Awesome target for kiki, giving you your little wurms each time.

Zealous Conscripts- Great ability to go infinite with kiki, or make another game changing take over with a permanent on the battlefield.

Price of Glory- Makes others really think about instant removal and counters before using them.

Vicious Shadows- Another card to take advantage of kiki's ability along with the death that goes on during the game from others.

Warstorm Surge- And another card that greatly allows you to burn with kiki's ability. This will allow amazing burn on players or creature removal.

Incendiary Command - A general utility card for various effects. Has a iffy spot in the deck and may be removed for something better.

Mizzium Mortars- felt this was a very good card for my playgroup being creature based. 2 for 4 damage on a creature isn't bad but for 6 you can generally clear out everyone elses board leaving yours intact.

Warp World - One of my favorite cards in magic, and provides a very fun effect to change the game around.

Wheel of Fortune- Needed draw for red and allows us to refill our hand with fun.

Ashnod's Altar- Sac source providing us with mana in exchange, allowing us to take advantage of copies or our combos to go infinite

Basalt Monolith- One of our mana rocks to help with acceleration, also goes infinite with Rings of Brighthearth

Basilisk Collar- Deathtouch and lifelink all in one card allows for lots of fun, it combos well with different things like Goblin Sharpshooter allowing you to clearing the board to your choosing.

Batterskull- Another good equipment with a living weapon effect, can instantly be tutored onto the field with Godo.

Caged Sun- One of our mana doublers which adds lots of acceleration, with a added lord buff effect to our red creatures.

Gauntlet of Power- another mana doubler/buffer though it works for all of those using mountains and/or red creatures.

Sword of War and Peace

Generals in our playgroup:

Card ideas to use against the listed generals greatly appreciated, thanks.

Thank you for taking the time to look at my deck.

karen bought a new copy machine for the office