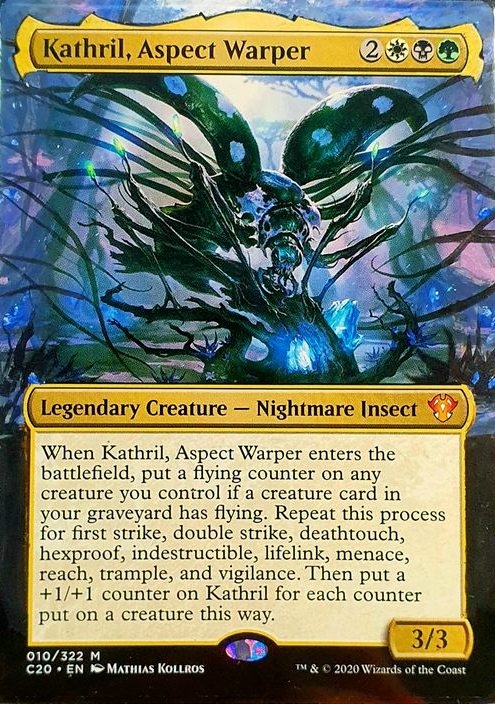 Voltron but you still get to put a ton of creatures in your deck? Voltron without auras and equipment to worry about?! Voltron with Eerie Ultimatum and Living Death as backup wincons!?!? Sign me up, buttercup.

SORT BY CUSTOM TO SEE DETAILS

Gameplan: Get Zetalpa and at least three other keywords into the graveyard, then one shot people with your 11/11 (or more) doublestriking indestructible hexproof flying vigilant trampling lifelinking deathtouching commander. Buried Alive and other graveyard tutors usually will get something like Bassara Tower Archer, Vampire Nighthawk or Kunoros, and Zetalpa. Tutor things to the graveyard, mass mill with Hermit Druid, sacrifice creatures with Birthing Pod for value and to put more keywords in the yard.

Trying to not put in too many creatures just for the sake of giving keywords, they're usually somewhat useful otherwise unless they just have really solid keyword combos like Nighthawk. There's enough tutors to get what you need in the graveyard without resorting to including too many bad creatures with good keywords. Stuff like Kunoros, Mirri, Questing Beast, or Oakhame Adversary are solid out on the board while you're preparing the graveyard for Kathril or recovering from a setback, and are also great if reanimated with ultimatum/living death. Playtest this for yourself and you'll see why some "obvious" cards like Aerial Responder got cut. I mostly stuck with tutors that are conditional (Fiend Artisan etc) or send to the graveyard, the deck is consistent enough already without expensive $ tutors.

And if your graveyard gets exiled, Pull from Eternity to get Zetalpa back!

This is seeming to be a popular list... I think I'll try writing up a primer here eventually.