Death is only the end if you assume the story is about you. 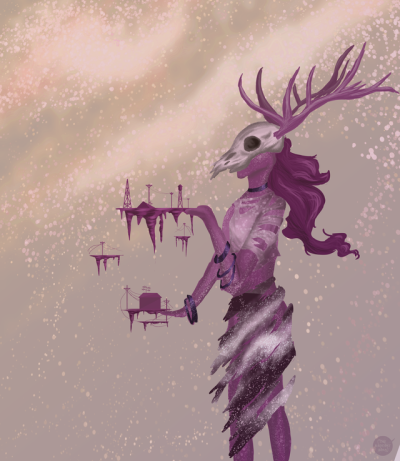 Karador, Ghost Chieftain is somewhat of a pet card to me. He was the first legendary creature I went out and bought a single of for the express purpose of making a commander deck. Me and Karador have had many ups and downs throughout the years. He has been built as a "goodstuff" deck with just the best cards I had to begin with (which is to say he was god awful at first, but so were my friends' decks). Then he gradually went to spirit tribal since the first innistrad set had just come out and I heard tribal is a good way to go if you want a deck that works together (this wasn't much better than before, but it made me love cards from the Kamigawa block). Some of the cards in that iteration that I liked the best were token producers... so we now turned it into a token deck with waay too many enchantments and planeswalkers to be a deck that really ever utilized the commander. Then, after seeing another Karador deck played, I thought "Maybe I should reanimate thicc archons and praetors and dragons and ol' nasty terasty". This was a prosperous time in the deck's life, and this is when I accidently assembled about half of the reveillark and friends combo. Upon finding the combo, I started looking to the internet for single cards that I could add to the package for different infinite combos. Eventually Boonweaver came to my attention and the deck started to lean more and more into combo. Hulk gets unbanned and immediately yeeted into a sleeve. I started playing at Hobbytown for the Commander league and saw people playing fast combo decks at the top tables... and that gave me the excuse to make it quicker and more powerful with cards that I had already been eyeing for about 4 years.

Karador has been instrumental in my understanding how to play the game, but the deck is currently retired as a physical deck and I have decided to just make it the best deck possible as I continue to update. Therefore I have switched to Tymna/sidar

Thank you for coming to my TED Talk.

The main goal of this deck is to create an infinite sac loop with a mixture of Karmic Guide, Reveillark, and Saffi Eriksdotter to a) infinitely drain with Blood Artist or Zulaport Cutthroat b) infinitely mill with Altar of Dementia c)use Boonweaver Giant or Protean Hulk to search for (nearly) all of my creatures in my deck.

If I don't have the combo, I will slow down the combos of others through HateBears like Thalia, Guardian of Thraben and Hushwing Gryff

3) Sac boonweaver to one of the many sac outlets

4) Find Karmic Guide bringing back boonweaver to the field, which in turn brings back pattern of rebirth

12) sac boonweaver to find any creature

Protean Hulk follows an almost identical line, but you can get a few extra creatures with each hulk sac(up to 6 cmc each time) and it can win marginally quicker due to less steps.

Phyrexian Delver acts as Karmic Guide in a pinch during my Boonweaver Giant or Protean Hulk lines, but I need to be careful with my lifetotal.

There are alternate combos that use some of those pieces that I have for redundancy in the combo. Each needs a sac outlet to work

Another combo that is contained within is Animate Dead + Leonin Relic-Warder . It doesn't need a sac outlet, but it needs something that can be used to bring a win, such as Blood Artist, Razaketh, the Foulblooded, or Altar of Dementia.

A notable exclusion from previous versions of this deck is Sun Titan. I had been considering taking him out for a long time, but he occasionally would win games for me. It is just that too often I couldn't/shouldn't cast him instead of being able to use him to full effect, and I never tutored for it because there are too many better options to tutor for. Farewell Sun Titan, you are gone but not forgotten.

Exile on a Stick

Fiend Hunter and Leonin Relic-Warder are some really interesting cards. One of my favorite things to do with them is to cause one of my opponent's permanents to exile permanently. To do this, we need to understand the stack.

"Boonweaver Giant and Protean Hulk have too high of mana cost to be able to be part of a competitive deck!" -you probably. But that is where you are wrong bucko. There are a couple types of options this deck has to cheat the mana cost as early as turn 2 (could be earlier, but I will not be buying mox and LED any time in the forseeable future).

The first way is to use a reanimate effect to yoink them from the graveyard.

The second way is to put Pattern of Rebirth on a dork and sac it to start your wombo combo. You can easily find this with Academy Rector so it functions as a second copy of pattern most of the time.

Chord of Calling for Academy Rector, Eldritch Evolution for rector, Birthing Pod for rector, and Natural Order for Protean Hulk are all also quick ways to get the combo going.

T1: black land and Viscera Seer T2: black land Entomb Protean Hulk and then Reanimate him so you can sac him and go through your wombo combo

T1: Green land and Llanowar Elves T2: land and Altar of Dementia T3: land and Pattern of Rebirth on your mana dork, then sac your patterned dork to start the combo