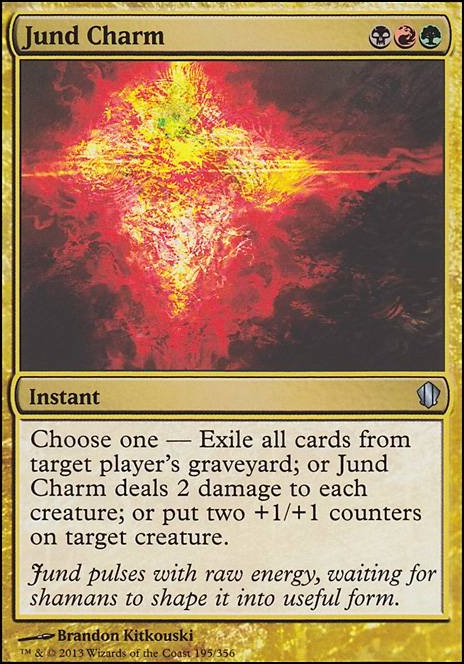 This list is meant to be used as a guide for your own deck creation. I have compiled the majority of pioneer legal cards that are suitable to include in a Jund midrange deck. I have also provided an explanation about the types of cards that are included and why they are important/what roles they play in the deck.

Jund is an attrition based midrange deck that seeks to disrupt the opponent's plan with wide spectrum removal and hand discard, then play beefy threats, value generating cards, or burn to close out the game quickly.

Each of Jund's colors has a pivotal role in the deck

Black is the foundation color of Jund. It lets us play hand discard and efficient creature and planeswalker removal. this is the color that mainly lets us stop whatever the opponent is wanting to do. Without black you would be left with a Gruul deck that has difficulty in interacting with the opponent's cards.

Green is the second most important color in the deck and provides us with three key aspects; Large and undercoated creatures to pressure the opponent and defend us, amplifying our removal package to hit artifacts and enchantments, and providing added card advantage in the late game. Without green the deck would become a Rakdos deck with much less staying power.

Red is the last color of Jund and the cherry on top. Red gives us access to two desirable traits that we want in our deck. Speed and Flexible damage that we can direct at our opponents. Haste creatures and direct-to-face burn give us the ability to close out the game very quickly when we choose to, this gives us a better game against control decks that usually do well against midrange. Red also supports the decks ability to "Shift" from a more aggressive deck to a more controlling deck. We can point our burn damage at opposing creatures or planeswalkers if we want to be on the defense and at the opponent's face if we want to be on the offense. Red gives the deck true midrange flexibility. Without red, Jund would be a more rigidly slower and grinder Golgari deck.

In short, Jund's strategy can be characterized with the following mantra: "Stop their stuff, Play good stuff, Then win quickly."

A decks mana base is its most important aspect and tells a lot about what the deck is trying to do. With the deck we really want to have T1 untapped black mana and T2 untapped green and red mana available. In pioneer, a 3 color manabase is very doable but there is not much room for including utility lands and going below 23 lands total. The sample mana base I've listed allows for maximum availability of colors while providing some multicolor utility lands and containing a high number of lands that come into play untapped.

All of these cards cost 3 mana or less and provide a large body that can beat down the opponent with. Many of these cards have some upside of providing value or flexibility in some other way as well.

A good number of cheap creatures is around 4-8 depending on other utility provided by them and your overall curve and meta.

Discard is our only way of stopping threats and combo cards efficiently before they are cast. Thoughtsieze is the best card in the format and should always be a 4 of in any Jund build (and ANY deck playing black). This should be supplemented by a few more discard spells. Davriel is a very easy to cast potential 3 for 1 that has the upside of dealing damage to the opponent sometimes. Liliana, waker of the dead is very good at Junding 'em out although sometimes can feel like it comes down too late and the symmetrical nature of the discard can really hurt us sometimes.

Extraction spells like necromentia and slaughter games can be really important against decks that rely on a single card for value like niv mizzet reborn. Some control decks only play 1 or two win condition cards that can be easily extracted with these cards resulting in essentially a 1 card win the game combo for us.

You will want 8-10 discard spells.

These type of cards are the bread and butter of how a midrange deck wants to win most of the time. They can let you draw cards, deal extra damage, or provide more creatures for you. There are many many cards that can fit in this slot in the deck and they are no means limited to this list. I would try hard to keep the mana curve as low as possible and not include anything above 5 mana value. You want these cards to be immediately impactful of they cost 4 or more mana and cause a 2 for 1 trade to happen the majority of the time they are played.

Jund has fantastic removal, most of it is 2 mana value or less. Whatever mix you decide on, be sure to include at least some spells that you can choose to use to burn out an opponent.

You will want around 8-10 removal spells with 3 or more of them being able to deal direct damage to the opponent as well.

The "Maybe" section provides card choices that are good in more specific strategies that requires a more "All-in" approach to a specific midrange strategy. Delirium and Sacrifice are the main alternate strategies for Jund right now. A Lurrus value based deck is also possible. I would also keep my eye on the energy midrange package in the case more energy cards are ever introduced to pioneer, they could form a strong base for a deck.

The upsides to playing a fair midrange deck are numerous. The first is that it effectively means the opponent is playing without a sideboard making the overall match your 75 card vs their 60 cards. Jund midrange doesn't rely on any combo, creatures, graveyard strategy, or large board presence. It is a flexible mesh of good cards that work well together without being reliant on one another. This makes the deck almost impossible to "Hate on" with sideboard cards.

Another good strength touched on earlier is the ability to pivot from being the defender to the aggressor at a moment's notice. From turn to turn, game to game, match up to match up, a good midrange deck should be able to easily adapt to anything the opponent is doing.

Jund does not come without its weaknesses. Its main weakness (Especially in Pioneer) is a lack of a solid card advantage engine. If an opponent starts drawing cards or bouncing things with yorion or reanimating with lurrus and you can't close the game out fast enough or answer threats fast enough it is easy to be buried in card advantage, especially against decks that have fantastic card advantage engine built into their already powerful combos or strategies.

Another weakness is that against decks that use strong synergies or combos, their power level can outshine our ability to be flexible if we can't provide a powerful enough threat/ answer combination. Rakdos arcanist gets massive advantage out of the graveyard, Yorion gets a huge advantage from playing many ETB effects. Niv mizzet reborn gets to draw a ton of cards because it plays many 2 color cards that it can draw easily. Combo decks can win on the spot if not disrupted. Jund midrange has no special property like this which can make our value out put and power level feel lackluster in comparison.

A third major weakness is while trying to build a deck that can't be hated out and a deck that can handle anything we can be so far strung that some of our cards wont be as effective against certain decks. Or our ability to handle one aspect of the game might be weaker than required because we have planned to handle ALL aspects of the game. This can be mitigated by playing cards that serve multiple roles and having a good sideboard appropriate for the expected meta. 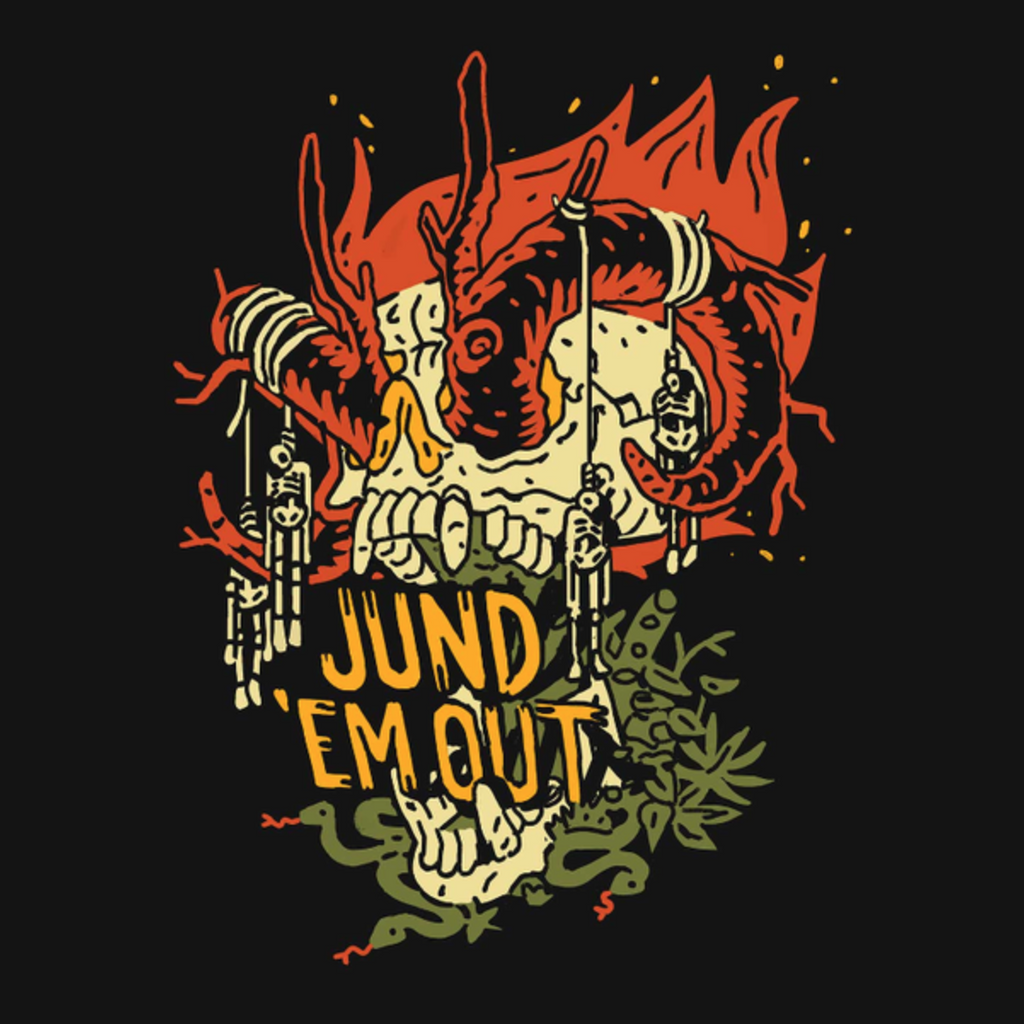