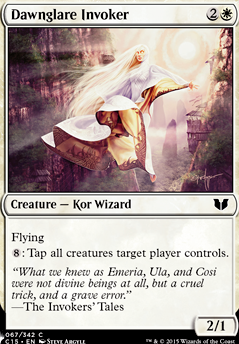 The idea behind this deck is to be a somewhat aggressive tempo deck, with an emphasis on Keyword Soup for defense.

Jubilant Skybonder's ability makes it uniquely suited to a go semi-wide strategy. Having many smaller targets makes it less worth your opponents' time and mana to remove your creatures, and reduces your losses when they do decide to waste a whole turn targeting one of your fliers. Meanwhile, the tax also makes it safer to put auras on your creatures to need them up a little. This also works well with a tempo style where you play aggressive fliers and start hitting early, since some decks won't be able to pay the removal tax until fairly late in the game.

The gameplay is pretty straight forward. Accumulate fliers, maybe attach some equipment and auras, and start beating face. Any fliers with vigilance help you keep blockers available to reduce counterattacks, and lifelink will help keep you alive through the attacks you can't block.

Other tricks include counterspells, tapdown effects, and team buffs. Abilities like on Disruptive Pitmage, which amplify the effectiveness of Skybonder's tax, and can also help slow down how fast your opponents can deploy their own large combat threats. Counterspells like Confound are also more effective, since your opponents are spending so much more mana on their removal. Tapdown effects and team buffs like on Rhox Veteran help you get damage in against opponents with flying blockers and greatly amplify the offensive threat of your creatures.

The obvious weakness of this deck is board wipes like Crypt Rats. Increasing the number of counterspells or indestructibility instants like Rootborn Defenses would help, but I think it will be difficult to increase the number of spells too much more without damaging the aggressive stance of the deck.