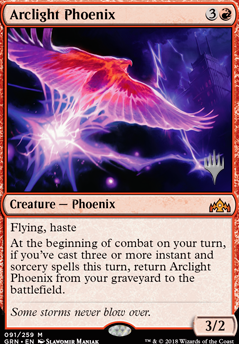 This version of Jeskai Phoenix is a deck using the cards I have collected. I will be editing the deck until it becomes the same as the other Jeskai Phoenix deck this deck is based around. The final decklist is here: Jeskai Phoenix - Aim.

Ah yes, rotation. After some cards rotated due to Zendikar Rising I traded and bought some good additions to the deck. First of all, I will (Hopefully) have all my basic lands be Unstable basic lands by the end of the year. Second, I added a second Crash Through and another Lightning Helix (I will get more). Third of all, there are some new additions. First up is Dreadhorde Arcanist , with three copies being added. It's very valuable to this deck in multiple ways. It can "Flashback" a spell for free, whether that be card draw, mill, removal or burn. It also is a removal target as it can get out of hand pretty quickly. Also it's cute alongside our one copy of The Royal Scions . The second new addition is one copy of Ral, Izzet Viceroy . It's mana cost is a little high, but it's game ending if your opponents leave it alone. There isn't enough removal to take out all the creatures in this deck, nevermind this planeswalker. Also, it mills us and also deals with creatures. Lastly, I have added two copies (soon to be more) of Mana Leak . Realistically, in Modern, this is a hard counterspell.