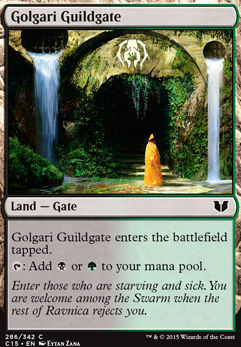 It's Raining Elves (1st at FNM)

From their groves
They come in droves
And Death follows


The goal here is to push out elves and screw stuff up. This deck consistently puts out turns 4/5 wins. The sideboard is still under construction.

Please upvote, I don't know why but I love those little things

Check out the other version of this deck here:

Okay first comment sweep and thank you all so much for your support and suggestions!

This deck took first again, but was unfortunately only in a three round game

I'm not really sure what to call his deck, but I think it was a W/U/G CoCo-Control...? He was running Reflector Mage and Eldrazi Displacer , but he was nowhere near fast enough

G/r Ramp/Stompy First game I just wasn't getting any creatures, and he was getting plenty. Second game he got to rampy and I stampeded him. Third round he succumbed to 3 Shaman of the Pack .

Because of the way everything had shaked out no matter how this game went me and my opponent would have gotten 1st and 2nd respectively, so we put in a draw and screwed around. That being said in our fake games I still came out 2-0 so make of that what you will.

Long story short, I've decide only my non-elf creatures and given into the Advocate