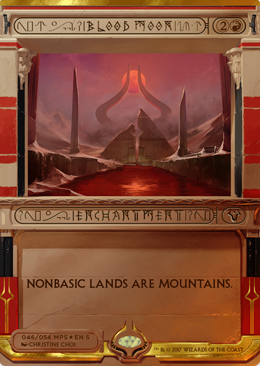 I am your Warden. Welcome, to my Prison

Blood Moon - This is the staple in any mono-red deck, as well as other red decks even in multiple colors. With the amount of fetchlands and shocks in modern, this card can very easily disrupt colors. Especially if it is played on turns 1-2 with the ramp that is in this deck.

Chalice of the Void - Staple in prison decks. This card on one can disrupt MANY early plays which allows me time to build up the fort. While putting this on 2 can hurt me as well, it is another way to lock out my opponents if I draw into multiples.

Ensnaring Bridge - This is a way to ensure that my opponent doesn't just blow me out with creatures. It is fairly easy for me to reduce my hand size with the explosiveness that I try to achieve. Also, Hazoret the Fervent helps in this regard as well.

Anger of the Gods - This will be put into the control aspect by hopefully slowing down my opponent enough so that I can continue getting my lock down. The exile effect is a huge step with dredge and Phoenix decks.

Chandra, Torch of Defiance - This card is one of the most powerful planeswalkers ever printed. It can kill troublesome creatures (Thalia, Guardian of Thraben comesto mind here), help me filter through my deck to find more lock pieces or deal damage once the lock is achieved, mana boost if necessary, and her emblem is a game ender.

Goblin Rabblemaster/Legion Warboss are powerful if not answered immediately. The ability to go wide can be incredibly helpful. Note, Ensnaring Bridge may seem like a nonbo here, but actually they work very well together. Say I'm out of a hand. I draw for turn, enter combat, make a goblin, attack with all of my 1/1s, then play my card in main phase two. I get to attack and my opponent doesn't. If they have blockers, I simply build up my army until I can attack with lethal. This tends to get out of hand quickly if I get more than one on the battlefield.

Hazoret the Fervent - This combos with Ensnaring Bridge when necessary, as well as being an indestructible attacker/blocker with the chance of coming out turn one. She is also helpful in getting some last bit of damage if I'm hiding behind my prison.

Pia and Kiran Nalaar - Similar to Hazoret, they can help get the last bit of damage through by throwing artifacts at my opponent if necessary. Drawing additional lock pieces can be helpful, but sometimes it's upsetting sitting there with 3 Ensnaring Bridges and doing nothing. P and K help in this regard by using the unneeded lock pieces as extra damage. The three bodies for four mana isn't anything to disregard either.

Desperate Ritual/Pyretic Ritual - These can help get early plays that will lock out my opponent. A potential turn one or two Blood Moon, Legion Warboss, Goblin Rabblemaster, Chandra or Hazoret when comboed with Simian Spirit Guide is a way to take over the game quickly.

Simian Spirit Guide - Same reason as above. Also, can potentially be hardcast for blockers or attackers if necessary. That, however, is not something to strive for.

I have chosen to run Snow-Covered Mountains for the benefit of also running Scrying Sheets. This can potentially move lands from my library so that I can dig further.

Scavenger Grounds - While Blood Moon does turn this off, this is potential mainboard graveyard hate. Our lock pieces do tend to help against graveyard decks (game one), this is just another boost to try and ensure we pull through with the win.

Ramunap Ruins - These are extra deserts to sac to Scavenger Grounds, or extra damage if necessary. Paying the one life can be upsetting sometimes, but we play enough artifacts that it shouldn't be deadly.

Gemstone Caverns - This is being used to try and be ahead on mana if I'm on the draw. Very useful to be ahead of my opponent even when they play first. Legendary is a draw back, but if there are ever two in the opening hand, I have a perfectly useful card to exile for the luck counter

Anger of the Gods - Just in case the deck can pump out creatures faster than me. This is a third way to wipe the board.

Boil - Obviously for control decks. If I don't outrace them in the beginning, they tend to outrace me in the late game. This is a way to either draw a counter, or put them WAY back on lands.

Dragon's Claw - For burn. Also helpful against storm decks since all or their red spells don't net them that one damage.

Eidolon of the Great Revel - For decks on the lower end of the CMC list. Specifically, storm and Arclight Phoenix decks. They cannot beat this card if it stays on the battlefield.

Ratchet Bomb - Pretty much just a catch all if necessary. Red doesn't do well against things like enchantments, so this is helpful. Plus, another board wipe if necessary.

Ravenous Trap - I wanted graveyard hate that would be able to be cast if not drawn in the opening hand (unlike Leyline of the Void) and I try to get a Chalice on one as fast as possible so things like Relic of Progenitus are out of the question. I may look into Tormod's Crypt for this spot, but we'll see.

Sorcerous Spyglass - This basically replaces Pithing Needle because looking at my opponent's hand makes this card SO MUCH BETTER. This is for things that are hard for me to deal with such as planeswalkers, potentially artifacts (Walking Ballista, Arcbound Ravager, Oblivion Stone, ect), and anything else that has an activated ability.

Torpor Orb - This is helpful against things like humans, spirits, Snapcaster Mage, ect. This is a fairly straightforward sideboard card.

Trinisphere - Since modern is such a fast format, if I can get this on turn one or two this can seriously hinder my opponent. Another great hate card for stuff that wants to play too fast such as storm, burn, and Phoenix decks.