The HATE deck
by Sorin_Markov_1947 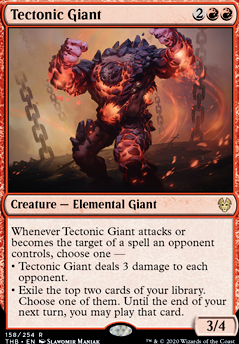 This is why we don't talk about politics
by Sorin_Markov_1947

Take a look at the history of the past few standard sets. Throne of Eldraine standard, Core Set 2020 standard, the Ravnica block. All of those standards were broken using strategies that took the marquee strategy/mechanic, and twisted it in some way to make it immune to the built-in checks on it. This is my attempt to do so for THB standard: Bant Enchantments.

Not a lot of people remember (because it wasn't a tier one archetype), but enchantments was a decent strategy in Throne of Eldraine standard. Mostly, it was on the back of one card: Dance of the Manse. So, we're going to combine the strategies of Dance decks with the newer enchantment decks.

I think this deck has the potential to be a serious contender, but only if people start playing it. Unfortunately, as a 16-yr-old student with little money and only a Mac to play on, I can't do it on Arena or any other platform. So, the task falls to you.

Please let me know if you do, because I take pride in my decks. Especially when they actually work and people get use out of them, which this deck certainly has the potential to do.

Advice is appreciated on the sideboard and maybeboard, as I think those are the decks weak points.

Believe it or not, Jund Sacrifice is still around - and strong! This is actually a difficult matchup, since this strategy left to propagate on its own is unstoppable, and we don't have a ton of disruption. +2 Devout Decree and +2 Whirlwind Denial is a solid call here, as is a possible Disenchant or two for the ovens. As for what to take out, -2 Elspeth Conquers Death, -2 Alseid of Life's Bounty works here. If you need more, flicker of fate isn't that great in the matchup either. Sorcerous Spyglass targets Witch's Oven, or is sideboarded out.

+3 Whirlwind Denial for the Krasi (or anything else that annoys you), and use your removal carefully! -1 Shatter the Sky, -1 Flicker of Fate, and -1 Teferi, Time Raveler seems about right. Sorcerous Spyglass should target Nissa, Who Shakes the World.

This is nearly a mirror, so it's rather interesting. Remember - especially in games 2-3 - to play around the wipes of Shatter the Sky and Heliod's Intervention. +3 Disenchant, +1 Sorcerous Spyglass, -2 Banishing Light, -1 The Birth of Meletis, -2 Shatter the Sky is my choice for this matchup. Depending on how heavy your opponent goes on counterspells vs enchantments, you might want 1-2 Thryx, the Sudden Storm instead of (or even in addition to) Disenchant.

The main reason I put Sorcerous Spyglass in this deck is for this matchup. Azorius control usually only has one way to kill you, to actually deal the 20 damage it needs to win: Dream Trawler. Now, it's a daunting task to kill all four copies when it can give itself hexproof, when they have Elspeth Conquers Death, and a Banishing Light isn't likely to stick any longer than a turn or two. What you have to do is play Sorcerous Spyglass (naming Dream Trawler), then hit it with Elspeth Conquers Death. If you're having trouble with either one getting countered, Thryx, the Sudden Storm can help.

This is probably our weakest matchup. Mono-red aggro has started taking over arena, and we don't have a great response to it. +2 Devout Decree, +2 Aether Gust, +1-2 Disenchant, -1 Elspeth Conquers Death, -2 Sorcerous Spyglass, and -1-2 Teferi, Time Raveler is the way to go. Use shatter the sky when death seems imminent, and always assume they have Embercleave!

A combo deck has finally made it into standard! Unfortunately, we aren't prepared for that. They'll be ready for counter-wars with a sideboarded Mystical Dispute, so our best bet is to go for +3 Disenchant hitting the namesake of the deck, +1 Dovin's Veto, and if you want, bring in some Mystical Disputes too. As for what to take out, -2 Sorcerous Spyglass, and the rest to take out is Shatter the Sky. Don't discount your removal, since after game one a lot of Temur Rec decks like to bring in flash bois and become a Uro/flash midrange deck. Especially don't discount Elspeth Conquers Death, which is a gamesaver in games 2-3 vs Rec.

This deck has really taken off since the weeks before World Championship XXVI! Unfortunately, it's another problem for us. +3 Disenchant, +2 Aether Gust, +2 Mystical Dispute, -3 Alseid of Life's Bounty, -3 Shatter the Sky, -1 The Birth of Meletis is my best idea here. Lifegain is important against fires, because it helps you race and stops potential Cavalier of Flame 18-damage game-ends.
Currently working on how to sideboard/play against Temur Clover.

As per Khunzo 's suggestions, I've removed 3x Narset, Parter of Veils and 2x Flicker of Fate from the mainboard, adding 2x Dream Trawler, 1x Archon of Sun's Grace, 1x Omen of the Sea, and 1x The Birth of Meletis.

In the sideboard, +2 Narset, Parter of Veils, and -2 Disenchant. I think artifact/enchantment removal is very important, but we already have 3 Knight of Autumns in the sideboard, and I think a 2/1 body and versatility is acceptable for one extra mana.