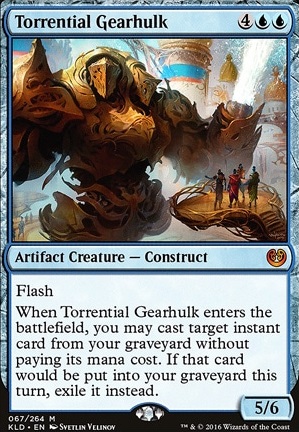 Traditional flash decks are boring. They faded out of relevancy long ago. Cards like Brineborn Cutthroat and Thassa's Intervention are far outdated. Instead, today we're playing BIG boys!

I got this deck from Jeff Hoogland, who is fantastic at creating good jank, particularly in Historic. There are some amazing game-winning synergies in the deck that I'd like to show you now.

Your counterspells like Jwari Disruption Â  and Quench are mainly to last you until you have four mana, as T1-3 are where the deck struggles. Aggro is particularly difficult, which is why we have Blast Zone as a land. Shark Typhoon and Brazen Borrower can be used for similar purposes, but they're just general value cards.

I don't play Bo3 with this deck (I don't have the wildcards), so I can't comment much on the sideboard. I will say that I know god-pharoh's statue is for the new storm decks and Ratchet Bomb for aggro. Everything else is relatively obvious, I think.

The manabase is also me being limited by wildcards and not wanting to invest into a Historic manabase. The original deck had more Breeding Pool and fewer temples/Fabled Passage and I think there were check lands as well. My manabase is still fine and I rarely have troubles. There are a lot of lands, but you really want to be sure to hit your land drops and ramp with Growth Spiral , and you have a lot of cards that can win on their own.

This is a really fun deck to me, I've always really enjoyed good synergy and especially flash decks. It performs really well in the play queue, but I haven't taken it into ranked since my version is incomplete and I don't play a lot of Historic.

EDIT: Added 2x Magma Opus as additional ramp, taking out 2x Jwari Disruption Â , which I found I almost never used either side of. Opus also has great synergy with Torrential Gearhulk . The manabase has also been adjusted slightly to give the option to hardcast Opus if Gearhulk is not drawn and ramp is not needed (late game). The very first game after adding Opus, I discarded it to ramp into a Gearhulk to cast Magma Opus which killed an Embercleaved Bonecrusher and blocked a Questing Beast. Literal perfect scenario.

Mega oof if you loose