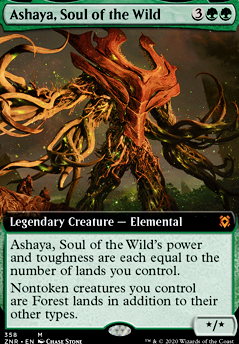 "Then how about Ashaya?" Nissa said. "Ashaya, the Awoken World." She had gotten the idea for the name from Hamadi. The first time Nissa had summoned the elemental, Hamadi had called Nissa "Shaya," which he said meant "Worldwaker." If she was the Worldwaker, then it only made sense that the elemental was the awoken world.

Nissa stopped the elemental halfway through, taking hold of its large thumb in both of her hands. With the touch, the tension went out of her own shoulders. She breathed in the smell Ashaya carried, the scent of the forestâdirt, sap, wood, and leaves. It was wonderful. It was powerful. "I'm sorry. I wish I could understand you." Her heart ached with the honesty of her longing.

Ashaya moved its other hand on top of Nissa's, clasping Nissa's small elvish hand between its two expansive branch-like ones. This was something new, something the elemental had never done before.

Nissa's heart quickened and her fingers tingled, anticipating whatever was to come..."

- For Zendikar by Kimberly J. Kreines

The Premise of the Deck

Welcome to my favorite EDH deck of all time! Like many people, when I first started playing Magic! I was very much attracted to the big monsters and the big damage potential offered by green. However, my love of the color and strategies were often stomped by (no pun intended) heavy removal and faster strategies within my house, so I had to develop a way to protect myself and speed up my strategies if I were to stay in the game. What I ended up with was a deck the played the way I really loved, but in a significantly faster, more unique, and oddly powerful way. I hope you enjoy this deck and fall in love with Ashaya as much as I did!

When I built this deck originally, it was under the commander Nissa, Who Shakes the World . To my surprise, I found out that this was not a viable commander, so it went through many iterations and changes. From there, it turned into a nerfed Selvala, Heart of the Wilds "brostorm" deck. From there, a very weak Yisan, the Wanderer Bard deck that nowhere nearly approached cEdh. After that short lifespan, it lived a long life under the leadership of Kamahl, Fist of Krosa. Upon the spoiling of Zendikar Rising, however, Ashaya stood out to me and I think best fit into the synergies and strategies I was trying to develop.

Benefits of this commander:

The premise of the deck in short: Turn your lands into creatures and your creatures into lands for extreme value. Focus your early game on ramp and finding your card draw engine - Tireless Tracker or Horn of Greed or The Great Henge . Cast Ashaya, Soul of the Wild and start out-valuing your opponents. If you can protect your board state well enough into the midgame, you will find yourself in one turn dumping out nearly your entire deck and overwhelming your opponents into a victory.

Why play this deck? If you enjoy smacking people down (what's up my Battlecruiser friends) and want to do so in a higher optimized or powerful meta, this deck could be for you!

Side Note: I use proxies in my mana base because I haven't been playing the game for 20+ years and cannot afford true dual lands, Gaea's Cradles, etc. This is how I've been able to keep the budget for this deck relatively in line. I'm a public school teacher in America so I'm used to making do with what I can. *that's all.

This is a creature heavy deck because I am a proud #Timmy player. We are also in mono-green, so that works out just fine. Most combo pieces for this deck are found within the creatures, so we have tutors built into this deck to help get those pieces out as soon as possible so we can start working.

The absolute MVP creature of this deck is... Stone-Seeder Hierophant . This card will allow any creature spell and landrop to untap our other creature/land permanents (aka Nykthos and Gaea's Cradle or Circle of Dreams Druid). I find that once I get her out, the deck tends to pick itself up and sail to victory.

This deck for the most part runs itself, but there are a few interactions/combos/strategies that I've personally really enjoyed that I'd like to highlight here. Hope you can find any of this information useful for you, should you be interested in building this deck yourself.

The most important thing to know when piloting this deck is to get to your card draw engine as quickly as possible. These include:

With the right board state, playing a one-drop mana dork should net you two cards, three mana, and a clue token. I've learned with this deck to hold back and interact when only needed and use every means you have to protect yourself until you can pop off completely. Ashaya not having trample generally makes people less scared by her enormous power.

Closing out the game

Closing the game with this deck is pretty straightforward. Typically, you will value yourself into a board position in which you can close the game with Craterhoof. I'll update this more later.

If you like what I've put together, feel free to upvote OR leave a comment! Any helpful recommendations or suggestions are always welcome. Also feel free check out my other decks and give them a little love.