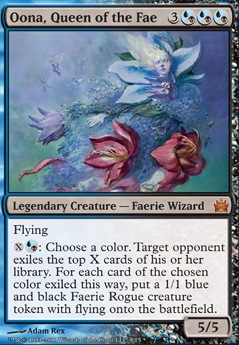 The second iteration of my Oona combo deck. We have two game plans.

This isn't a dedicated Doomsday list, as I'd like other ways to win and just going the same route every time bores me to death. That's the reason I don't run Demonic Consultation as it's such a boring card when paired with Thassa's Oracle . Either way, we're going to end up exiling either our opponents or our own library to win. I say this, and yet the way I have the deck set up is our Doomsday pile is pretty much just gonna be Gitaxian Probe into Ponder into Sleight of Hand into Thassa's Oracle pretty much every single time. Hypocrisy reigns supreme!

My meta favors slower creature-based combat decks and the other players do not like combo decks. However, I love combo decks, and am forced to play them at a slower pace than winning turn 3 (Around turns 7-10). As such, I run Glacial Chasm since this isn't a creature deck, I want to survive in a combat-focused meta, and I don't want to run tribal faerie Oona. It's really weird, I know, but it's the only band-aid for this solution I can think of right now beyond Maze of Ith .

Here is a quick list of many of the infinite combos in the deck and what they do:

Now, what to do will infinite mana? Play Oona, kill table.

Now, I will say. This deck did begin as sort of a half-budget build based around cards I already had, and I didn't want to spend more than say, $15 per new card to acquire. However, as I played the deck I grew fond of it, and I decided fuck it, let's buy some cards. This is the main reason the deck is missing staples like Force of Will , Grim Monolith , Yawgmoth's Will , etc. Eventually if I keep the deck together long enough, I would like to try and acquire some of those cards, particularly the Yawgmoth's Will . I feel like that one card would be the biggest single improvement to the deck, as it gives us recursion and a way to further abuse our stuff.

Here is a list of the replacements I plan on eventually making. Probably going to be a while before I can do these though.

I was able to play a couple times this week with this deck - twice on Tuesday and twice on Thursday.

On Tuesday (4/27/2021) the deck absolutely did not perform. I wasn't able to cast Oona either game, and was mana starved both games. Second game I had just three lands the entire game, with no rocks. It was not fun. Needless to say, I lost both games very badly.

On Thursday (4/29/2021) the deck absolutely did perform. Both games featured the same decks - a Kynaios and Tiro of Meletis grouphug deck, a Obuun, Mul Daya Ancestor lands matters deck, a Aesi, Tyrant of Gyre Strait large creatures deck, and me on Oona, Queen of the Fae . The first game, I was able to combo off pretty early with a Codex Shredder into Isochron Scepter and Dramatic Reversal combo, milling everyone and winning the game. The second game was a grindfest. It dragged on for so long, but I was able to adequately control the board through a mix of counterspells and politics. I eventually ended up winning through Vizier of Tumbling Sands + Freed from the Real + Gilded Lotus , but the game was still almost two hours long. I also learned from these games I really like stack-based interaction.

I will admit, I was rather demoralized that Oona didn't do well at all on the first day of testing, but wanted further testing. I met up again on Thursday and the deck was great, restoring my faith in her. I still want more testing to do, but I think I'm gonna cut a couple cards for more counterspells and the like, as I realized I didn't have enough of them when I need them most. I'd like to try and pick up a copy of Disallow and Mental Misstep , as a last-minute Swan Song from the Aesi player nearly costed me Game 2.